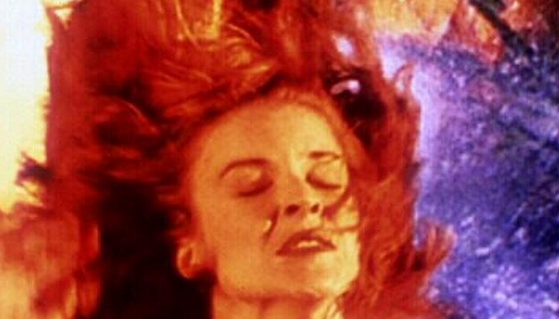 On May 22, 1995, Fox's Melrose Place ended its third season with one of the biggest cliffhangers of the decade -- and one of the most memorable in TV history.

After a year of being betrayed, bothered, and bitchslapped, Dr. Kimberly Shaw (the marvelously wicked Marcia Cross) had plenty of reasons to hate just about everyone who lived at that titular poolside apartment complex. So what's a gal haunted by visions of a demon named Henry (who turned out to be her mother's rapist whom she killed in self-defense as a little girl) to do?

Strategically plant four firebombs around the apartment complex and set 'em off of course!

I had been near the end of my freshman year of high school, and my summer plans were up in the air. I was too old for camp, and I was just one year shy of being legally employable. So what's a boy obsessed with horror novels and Aaron Spelling primetime soaps to do? Help out at my aunt and uncle's ballroom dance shop, read a ton of paperback thrillers at their beach club bungalow, and speculate over the fate of these fictional characters.

Granted, the bombs didn't go off until the September premiere (due to the sensitivity surrounding the real-life Oklahoma City bombing), but here's what went down 20 years ago:


I know what you're thinking: why does that detonator look like something for a remote-controlled toy car?

Did Melrose jump the shark with this blatant ratings stunt? Sure. But did it make for an OMG-worthy TV moment during a pre-hashtag-trending era? You bet your ass it did.

November 22, 2017
Earlier this year, when the trailer for the most recent Murder on the Orient Express remake was dropped, I was hoping that someone at 20th Century Fox would have the foresight to concoct an Agatha Christie Cinematic Universe. After all, this is the world we now live in -- where every property coveted by a major studio must have the potential to be milked for all it's worth. Plus, as a former child raised by an Agatha Christie fan, I am somewhat familiar with this world, and experiencing new renditions of these titles as an adult is exciting.

And now that Kenneth Branagh's version of the Hercule Poirot mystery has been released (and raking in $150 million-and-counting worldwide), it seems like my prayers are being answered. The studio is going ahead with a "sequel" in the form of a remake of Death on the Nile, another death-filled destination about the Belgian detective taking a river cruise in Egypt and coming across another corpse and another group of suspects.

Hiko Mitsuzuka
Hiko Mitsuzuka is a self-proclaimed pop culture connoisseur who resides in L.A. and obsesses over pop songs months before everyone else does. Hiko has worked in TV and commercial production ever since he left his native New York in the early aughts. He has worked at the world-renowned Anonymous Content and freelanced as a treatment writer for award-winning directors, a contributing writer for Instinct, and the Executive Editor of Hotter in Hollywood. Hiko can currently be seen in the roles of Manager of Creative Planning at Stun Creative (PromaxBDA's Agency of the Year, 2013, 2014, 2017, 2018), film critic for ScreenPicks, entertainment and travel journalist for Bello Mag, and contributor for The Huffington Post. His hobbies include quoting sitcom dialogue and stalking people on Instagram. His vices include chocolate chip cookies and movie theater popcorn. Tweet him @TheFirstEcho.