...And on the Seventh Day God Created Coachella 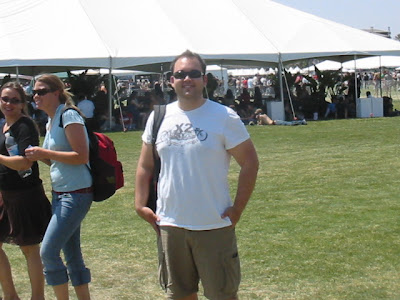 Lessons learned this past weekend:

1. Kanye West enjoys A-Ha's "Take On Me" and can pull off a mean Molly Ringwald two-step.

2. Sigur Ros is a moody Icelandic band that will never be found on my iPod. 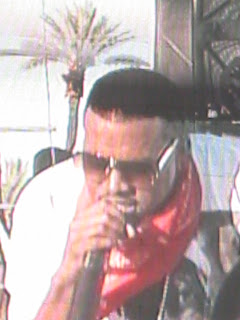 3. Daft Punk= sonic orgasm. If you have the chance to see them spin live, do so.

7. After six straight hours of standing in a pit of sweat, shoving, and secondhand bong smoke, a beef gyro with teriyaki sauce and a cold bottle of Pepsi at 11:30pm is heaven on Earth.

Somewhere, miles past Palm Springs, there's a place called Indio where tens of thousands of alternative music fans from across the Southwest gather on a vast desert field for the annual 2-day festival known as Coachella, a 21st-century Woodstock (only more corporate-driven and wi-fi-friendly). 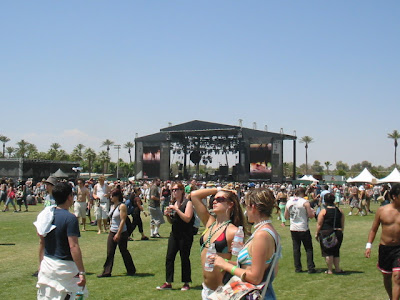 Thanks to "I've-never-won-anything-before" Karim, I enjoyed a free ticket to the 2006 shenanigans (Mr. Shah was the 30th caller on KROQ last week). Loaded up on PowerBars, sunscreen, and Fiji water, we took Sydney, my Focus (apparently naming one's car is an epidemic spreading among twentysomethings nowadays) for a two-plus-hour drive into the desert.

The line for parking extended onto the highway. All walks of life were gathering for the musical buffet that was lined up for the day. The sun finally broke through the haze. The heat was rising. 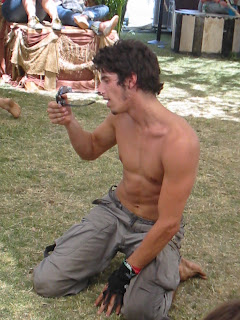 First, the merchandise booths, where 25 bucks went towards a nifty green Coachella tee. Next, the "jungle" dome. I call it "jungle" because of the fake vines, leafy plants, and misting fans that stood as decor as well as the thumping drum-and-bass that attracted plenty of shade seekers. Scantily clad interpretive dancers frolicked and humped their way through the seated crowd. After filling our hedonist quota for the year, Karim and I toured the rest of the grounds -- the standard hot dog/hamburger/gyro/kabob stands, the mechanical two-seated Ferris wheel, the metalwork sculptures on display, the two-dollar bottle of water (those working the gates confiscated any beverages from our backpacks...grrrr). 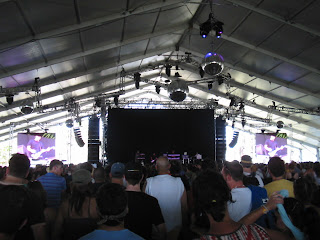 Soon enough we made our way to the Sahara tent, the ginormous venue (think: airplane hanger) for all of the DJs that were to spin throughout the day. Perry Farrell from Jane's Addiction was on stage sharing some vocals while Hybrid mixed some tracks behind him. What had to be the world's largest disco ball spun above our heads. As expected, there were lasers to accentuate the whole affair.

Next door was the Internet tent where I cooled off with a quick e-trip to MySpace to let my 400 friends know where I was. Everyone and their high-as-a-kite cousin did the same.

Next stop was the Coachella Stage to catch a few acts leading up to the headliners. Common went on shortly after 4pm. I think the sun burned my eyelids off at that point. 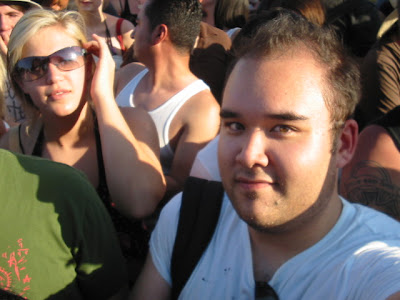 As soon as Kanye West took the stage, that one-of-a-kind odor permeated the air. You know what I'm talking about. Several people in the thick crowd were passing around those "special cigarettes." Parliaments they were not. Needless to say, Kanye rocked (can a hip-hop artist rock?). He opened with "Diamonds Are Forever" and go the masses jumping for "Jesus Walks." Mr. West had me rolling with laughter when he prefaced "Golddigger" with the following allowance: "Okay white people! This is the only time it's okay for you to use the word n****r." He then shared some of his favorite tunes, a pleasantly diverse arrangement ranging from 80s pop to early 90s soul. A-Ha suddenly blared from the stage, and everyone screamed when he mimicked Molly Ringwald's dance from The Breakfast Club. The man totally won me over.

Sigur Ros was the band from Iceland. I didn't get them. At all. Singing in moody gibberish, I asked myself, "Am I really listening to this?" According to Ms. Jennifer Carno and my bosses at work, they are "fucking amazing." Apparently one needs to appreciate them in a smaller, more intimate venue. 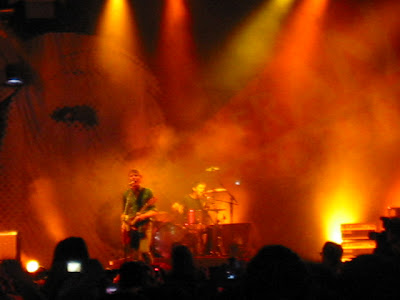 Franz Ferdinand came to the rescue with an awesome set mixing stuff from their old and new albums. Security guards started tossing free water to the crowd. I eyed one of them to aim for my reach. An incoming Crystal Geyser flew over some heads, struck my palm, and bounced off the head of a guy next to me. "Oops, my bad."

Depeche Mode arrived at nine. A large silver orb occupied one corner of the stage, flashing the words "pain," "love," "peace," and "suffer." A marquee scrolled out a "Hello" to the fans. By now I was a sardine squished beyond belief, my arms pinned to my sides, body odor enveloping my private space. I knew I couldn't take any more. Dave Gahan and Co. finished their third song when I "peaced out" to Karim, hopped over the barrier with a little help from a security dude, and made my way through what seemed like a thousand sweaty strangers, Depeche drones deep in a trance.

I collected my wits, breathed in some fresh air, and devoured a beef gyro on the way back to the giant Sahara tent where Daft Punk was prepping for their closing show.

A sizable crowd had already gathered. The chanting began. "DAFT PUNK! DAFT PUNK!" Suddenly, the synthesized notes used by the aliens in Close Encounters of the Third Kind announced the arrival of our otherworldly entertainers. The curtain opened. Two robotic spacemen wearing metallic helmets stood at the top of a neon pyramid. The roar from the crowd was deafening. The French DJs, whose identities still remain unknown, boomed into their set with "Technologic" surrounded by a grid of glowing triangles. A wall of lights flashed behind them. It was a performance -- and experience -- for the music history books (and countless MySpace bulletins).


I bounced along as I watched couples of all orientations move together in unison, as if they were all connected. And they were. It was one of those magical moments that simply connotes unity and love. I met a couple from Mexico who shared a portion of the barricade I used to stand above the crowd. They were just happy to be there. 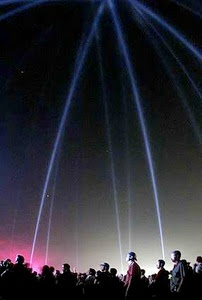 While I made my way out of the tent, Daft's "One More Time" began. I sent a text to Karim to meet at our pre-planned rendezvous spot in front of the jungle dome where we had started our Coachella journey. On my way I stopped at a Haagan Daz wagon to scarf down a late-night treat. I looked up into the night and saw beams of light shooting up into the heavens forming one giant spectral tent over the entire festival. The spotlights were strategically positioned around the grounds. It felt as if I were truly on another planet, perhaps in another galaxy.

I wonder if Daft Punk had an actual spaceship parked nearby.