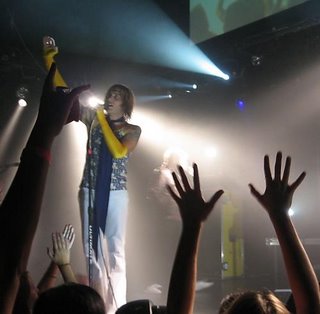 And then there is flat-out, ridiculously insane exhaustion.

'Tis 2:28 AM on Sunday morning, August 13, and I am attempting to start a new entry based on one of the most mentally and physically draining days of my life. I must finish before the vanilla-coated Tylenol PM kicks in.

Previously on "Hiko"...I had mentioned that I was a coordinator for a celeb-filled event called Hot in Hollywood, a one-night-only show benefitting the AIDS Healthcare Foundation. Last night was the main event. Picture me with a headset and clipboard, running around like a beheaded chicken on cocaine and you might come close to visualizing what I went through. I was in charge of 80 volunteers. That's 80 people whose names all sounded the same, 80 individuals for whom I was responsible, 80 pairs of eyes that would turn to me whenever they had a question ("Who do we let into VIP?" "Does the ATM machine in the lobby work?" "Where's the cash bar?"). And it didn't help that my fifth week at Anonymous had been my busiest (Boss in Bucharest, insurance drama with our XBox shoot, etc).

On the menu: Making sure Jaime Pressly's dressing room was perfectly scented with candles and bouquets. Sending two volunteers to get four cases of bottled water to replenish the green room. Running out of parking passes in the VIP lot. Trying to find a handler for Shar Jackson (yes, the former Mrs. K-Fed) who was scheduled to deliver a statistics speech on AIDS among women of minorities (the one heavy moment of the night). Catching a glimpse of the actor from "Passions" who performed a disco number with an actress who's starring in a new network drama premiering this fall. Checking in with my security guys to make sure the VIP rooftop cabana didn't fill to capacity. Checking in with the front house to make sure tickets were selling. Checking in with Matt Czuchry from "Gilmore Girls" to see if his stalker was waiting for him backstage...Checking my pulse to make sure I wouldn't fall into cardiac arrest.

Three years ago I had been an attending volunteer at one of these types of events. And now, as a Man With A Clipboard, I was exposed to the underbelly of the dog-and-pony show. Running on the fuel of popcorn I had consumed earlier that afternoon at a screening of "Pulse" (Godawful, in case you're wondering), I moved my feet and darted to and from each post throughout the crowded venue. Yes, it was hell, but at the end of it all, we raised over $70,000. We brought awareness to hundreds of people, touched thousands of lives - all that feel-good crap.

And of course, it wouldn't be a Hollywood benefit without gift bags. Here's where I cut to the chase - nothing to write home about. Just rest easy knowing I can get $75 off my next session at Hollywood Tan.

I did make new friends and acquaintances out of this spectacle. My MySpace profile got a few extra connections out of it as well. And all of this is why my butt was firmly planted on the couch in front of the TV all day Sunday.

'Twas the beginning of the end of a blink-and-you'll-miss-it summer.

Most of my summer was spent obsessing over a new rock band I discovered on iTunes as a Free Download of the Week. Under the Influence of Giants debuted in stores last Tuesday, and I am seeing them perform live for a third time this Thursday. Hello, I am a Giant junkie.

Last Thursday I saw them perform at the Key Club on Sunset with Jenn. The kids waiting outside were just that...kids (Unfortunately it was an all-ages gig). Dressed to the nines in slutty-peasant one-pieces, as if lifted from an episode of "Laguna Beach," or worse,"The Hills," these material girls stood on the curb like they were practicing poses for certain future nighttime jobs. Jenn and I looked at each other and shook our heads trying to comprehend the motives of these born-in-1990 Paris wannabes. I had a good laugh.

The show started near 11. Aaron, the lead singer who could be the love child of Mick Jagger and Barry Gibb, encouraged everyone to dance and stay for the afterparty which was originally guest-list-only (naturally, I've attached a pic). I later managed to get my poster signed by David, one of the guitarists and backup vocals, while geekily informing him how I bought their album with the bonus remix disc that is available only at Best Buy.

Luckily my obsession has now been redirected at the film "Little Miss Sunshine" (it's going on my top 10 for '06) and Christina Aguilera's "Back to Basics" (same for music).

There are few albums one highly anticipates, and when said album is actually purchased, little does one know that some expectations can be shattered.

Or swiped into oblivion by a wrecking ball.

Ladies and gents, if you thought Miss Christina Aguilera-Bratman could NEVER top the masterful "Stripped," please think again. "Back to Basics" is the most mesmerizing melting pot of jazz, soul, hip-hop, and sweeping Danny Elfman-esque orchestration (yes, you read that correctly) ever to fall upon listeners' ears. To simply call it a pop album would be like calling Mount Rushmore a pile of rocks. Normally, I wouldn't push a CD (let alone a double-disc) so strongly, but "B2B" deserves the praise it has been receiving from reviewers. Bow your heads in shame, all you Rihannas/Nelly Furtados/Cassies of the world. And Christina? Get your dress and acceptance speech ready for the 2007 Grammys.

I'm sure my next obsession is waiting for me around the corner of next month, but while I dwell in the present I shall continue to ride out the rest of August like the nagging bull that it is. And by "ride" I mean "check the following off my calendar": attend a dinner with the HIH committee, a red-carpet benefit at LAX (the club), a Michael Kors party on Rodeo, a screening of "Snakes on a Plane," a rock concert in Echo Park, a work luncheon at Ivy by the Shore, a guest-list-only function at Geisha House, get-togethers for the Emmys and VMAs (can anything top the suckage of last year's mess in Miami?), and finally...three more birthday parties.