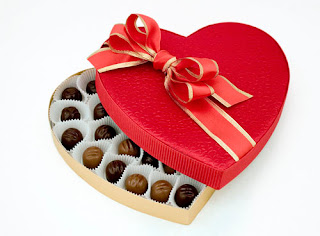 I am not opposed to heart-shaped velvet containers filled with dark truffles and caramel goodness. I am not against a beautiful dinner accompanied by a bottle of fine merlot. Heck, sell me a pink shirt at any given retailer, and I'll wear it with pride (hopefully it complements one of my dashing pin-striped blazers).

But just like Christmas forces people to be considerate and giving for a few days out of the year, Valentine's Day forces people to mimic, for one night at least, the rituals of a poorly written romantic comedy or reenact scenarios found in the ruffled pages of a Harlequin novel.

And that is what makes me grimace - the fact that millions of dollars go into creating superromances for one day when every day should be just as special.

I'm no Bitter Barney. Even though Cupid and I have yet to be on the same wavelength, I don't spit on couples who hold hands on the sidewalk or sip soda through straws from the same glass at outdoor cafes...I save that for Wednesdays. 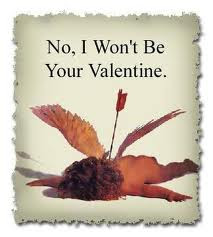 Every year the anti-Valentine sentiment seems to grow stronger in Los Angeles, probably because the number of singletons in this country is bigger than ever. The florists can charge whatever they want for a dozen roses, the candy shops can stack up as many boxes of chocolates as they can, and the restaurants can book all the tables they have - but there will always be those who will opt for night out with their fellow loveless, dressed all in black and ready to give Puppy Love the Evil Eye.

And am I wrong in thinking this anti-Valentine feeling is just as strong in the coupled community? There are those poor schlubs who dread February 14 because it's the day they have to empty their wallets for significant others who think their lives should resemble a decadent episode of Sex and the City.

It's special when you surprise your bf/gf/lover/partner/mistress/trick with a romantic dinner or gift on any given day. We're conditioned to expect the special stuff only on the special days, and whenever the Special hits us on a Regular day, we become suspicious, cynically looking for ulterior motives.

Why is Johnny giving me a bouquet with a teddy bear? Who did he sleep with?

Why is Jill serving me breakfast in bed? Did she delete the game on TiVo?

Swallow the pill, accept the token, and be thankful that someone cares.

Also, while you're at it, mentally kick yourself for not thinking of it first.

For me, Valentine's Day has been a very small blip on a very small radar for the past two weeks, probably because I have been preoccupied by one birthday party after another. Apparently half the population was born during January and February, forcing me to buy greeting cards in bulk now.

I did receive a surprise Valentine treat on Friday night. It was a heart-shaped box full of pink M&Ms, courtesy of one Miss Rachael Friedman. She had passed them out to our friends during a vegan dinner at Real Food Daily on La Cienega. And to add a campy touch, she taped a Britney Spears Valentine card (circa 2000) on top: "Vintage Britney: B.K. (Before Kevin)" she scribbled.

It now sits on my kitchen counter for all to see. Naturally, I had consumed all the chocolate candies that night. I finished them while driving home from Arena, where I had stood for hours to see BT (that's Brian Transeau for the uninitiated) mix and spin through his Laptop Symphony for hundreds of lonelyhearts hungry for some good, solid electronic beats.

There's nothing like a good, booming remix of "Smells Like Teen Spirit" to get you in the mood for what's arguably the most romantic date on the calendar.

Book those reservations. Inhale those raspberry truffles. Wink at your office crush. V-Day has come.


Breaking out the pink shirt,

Anonymous said…
You can be my Valentine Hiko!
7:15 PM

Anonymous said…
You make a good point about how we're conditioned to expect special stuff on special days. They're not called "Hallmark holidays" for nothing.