I am trying to remember a time when my life was one non-stop social scene after another, and when I do, I realize the memories are so vivid...

Probably because it was just several days ago. 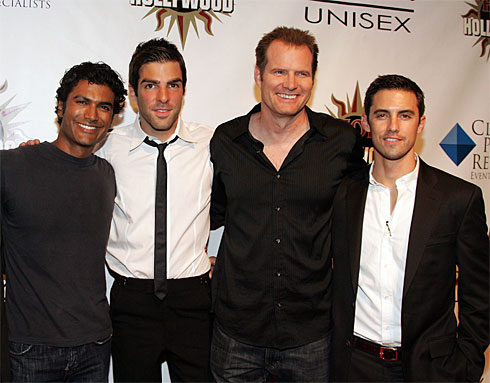 Hot in Hollywood 2007 has come and gone, and if you don't know what that is, then clearly you haven't stepped foot near a Myspace bulletin or been on the receiving end of one of my email blasts searching for volunteers and soliciting tickets to possibly one of the hottest Saturday nights of the summer.

Also attending was Sandy Mitsuzuka. My mother made the trip out to L.A. to see her talented, popular son and experience a little Hollywoodness herself. I wanted to give her a taste of some vapid nightlife, and after three bourbon 7UPs, she had her fill. I had the pleasure of introducing her to several committee members, some acquaintances who worked the event under my wing, and the entertaining Rex Lee (Although she has HBO, my mom has never seen an episode of Entourage...she will now).

We raised more than double what we took in last year for the AIDS Healthcare Foundation. And silent auction items are still being tallied as I type this. The night ran a bit more smoothly than last year's first annual event. My 60 volunteers were distributed throughout the venue, helping out, doing their part for an amazing cause.

And now I have hope for my life returning to a state of bland normalcy.

Contrary to popular belief, my life in LA has not been an insanely wild trip down red carpets and champagne brunches. My shenanigans do not warrant extensive coverage on E! or the glossy pages of OK Magazine. When a party is thrown or a premiere is happening my comrades and I only like to think we're worthy enough to be included in the glitterati ranks. But alas, when you strip away the Kiehls-moisturized veneer, we're just common folk content with curling up on the couch with a cup of herbal tea and several ruffled pages of the latest Harry Potter.

My current financial condition has become more serious than I had thought, and now I need to reevaluate what I consider luxuries in my day-to-day existence. Being slapped with warnings from the Keepers of the Credit Card and the Student Loan Police will keep me straight-jacketed for a while. If I had been frugal before, I will be Peter Pennypincher from now on. Sayonara Starbucks. Goodbye Grey Goose and cranberry tonics. And do I really need to spend eleven dollars on the latest John Cusack at the Grove?

And just what I needed...during afternoon rehearsals for Saturday night's show, I got a parking ticket while running into the Coffee Bean at Sunset and Argyle. It was one of those moments where you see the Parking Enforcement Officer smugly writing out her violation report while you're running up to her, waving your arms, crying "I'm here! I had put a nickel in, but I had to run in to get more change!" And of course she continues to scribble, studying your license plates, ignoring your pleas and the excuses she's heard before.

"I'm on my way to and AIDS charity. I need to get these toys in my trunk to children who are waiting for me. It's just right up the street. Please." Yes, I stretched the truth a bit. I mean, sick children + charity = Aw, okay. Go ahead. Let me rip up this ticket here, and you go on and do what you got to do.

Apparently the wordless meter maid (forget the politically correct name) was immune to the Mitsuzuka Charm because she slapped my windshield with a $40 fine and walked away.

I should've invited her to the show.

It's not as if I have splurged away the past five years in Los Angeles. Compared to some of my counterparts, I have kept somewhat of a low financial profile. I am just a firm believer in freebies, and I have managed to make myself accessible to all of the perks my industry has to offer (this shouldn't be news to most of you because I have bragged about past gift bags received, free screenings attended, special invites to celebrity smorgasboards).

Right now I couldn't be more disinterested. I truly wish to do nothing, go nowhere, see no one - pull the plug on my constantly beeping social calendar, zip it up in a body bag, and bury it out front underneath our newly planted gardenias. But how long can I hold out? Something tells me it won't take long for me to gasp for air, claw my way out and revive what was once gone.

I've come to accept that summer is over. The past month flew by since I was distracted with the non-stop pressure cooker that was Hot in Hollywood. It was as if I had two jobs at once.

I've come to accept that Christmas is now just four months away. I'm ready for autumn and its more cerebral films hitting theaters. (Plug alert! Anonymous Content's Rendition comes out in October) See the movie that brought Jake and Reese (a.k.a. Reeke) together:

I've come to accept that I need to decide on a Halloween costume - now. If you've had the pleasure of attending one of Matt's Halloween Havocs, you know why. Perhaps I'll wear a few cushions, attach several golden russets to them and be a Couch Potato?

I'm certainly itching to empty my schedule and be one now.

Jenny said…
That's so fun that your mom came out! I totally wish I had come. :( Maybe next year? :)

Don't worry about the $. We all go through it one time or another. Don't become a hermit though - just watch free On Demand movies instead of buying and keep up with the freebies. You'll make it!
6:54 AM