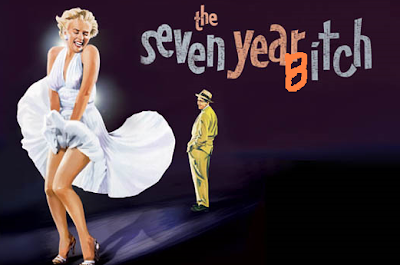 Last month I took a dip in a pool of Douchebaggery.

I had been called "Bro" for the very first time in my life by a dude who could have easily stepped out of a casting session for VH1's Tool Academy. Greased hair. A tan on top of a tan. Shirt unbuttoned well below the chest. Corona in hand. All that was missing was an Ed Hardy trucker cap and a T-shirt reading "Megan Fox, Call Me." I'm sure this fine young gentleman had the best intentions and was well accomplished beyond his achievements in beer pong and Grand Theft Auto.

I was introduced to said greaser and several of his characteristically similar friends when I stopped by Julie's apartment in Studio City to drop off her belated birthday card and kill some time before my Saturday night plans started to take shape (gone was the plan to meet up with Swaga at a BET party somewhere in the hills). When I arrived, Julie was prepping herself for a night on the town with a bunch of girlfriends. When said hoochifying was complete, she invited me to tag along with them on their excursion to Red Rock and Skybar (read: the Sunset Strip). Although I would have appreciated the opportunity to receive all the benefits that come with hanging out with a harem of hot chicks -- breezing by bouncers, free shots of Patron -- I felt the urge to stop for some pump-it-yourself fro yo at The Yogurt Stop in West Hollywood instead before heading home to enjoy the comforts of my newly purchased sofa.

"At least stay for a while and come to my neighbor's party before we leave," Julie told me. Which I did. 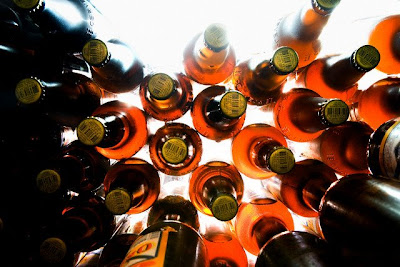 Her neighbors, four dudes in their early 20s sharing a 2-bedroom apartment, were throwing a birthday party for one of their own. It was the perfect occasion for the ladies to do a little pre-gaming. Walking in, I expected a frat warehouse full of kegs and neon beer signs prominently displayed on the patio. Not quite. The apartment was well-kept, subtly mismatched yet minimally decorated with the best Ikea could offer. Navy blue accent wall. Sleek, white entertainment unit. And a "coffee table" better suited for an outdoor terrace.

The birthday boy (all names were forgotten the instant I shook everyone's hand) was turning the big 2-4 and had been living in L.A. for only six months. "Still a newbie," I observed, going through the obligatory round of questions that never seem to get tired: Where are you originally from? What do you do? Texas and an actor, in case you're wondering.

It was hard to maintain any interest in the conversations that went on with most of the party people. Yes, everyone was in good spirits, merrily drinking the night away with the hopes of getting a phone number, or better yet, a little late-night PG-13 play. However, I couldn't shake off the feeling that I had been here before, that I had once lived this very scene, but with different characters. As Whitney Houston and Deborah Cox once sang, "Same script, different cast." There was also an air of enthusiastic naivete that hung over the room, and it felt slightly nauseating after a while.

It felt like I was a senior back in college, focused on my post-graduate aspirations, and I was infiltrating a mixer full of freshmen adjusting to the confines of their first dorm room. These fresh-off-the-road-trip twentysomethings were the freshmen, and L.A. was their campus. I was the been-around-the-block veteran still waiting for a break.

The end of June, as some of you know, marks my seven-year anniversary of living in Los Angeles. This is the time when I take a look at my life, analyze the crap out of it and mentally beat myself up for not having accomplished more than I should have. In other words, act like a 29-year-old continuing to find his niche in The Big Scary World while constantly re-prioritizing his goals. However, I've learned to "just keep swimming," continue to count the positives and appreciate and celebrate what I've achieved thus far. And in the past year, it's been this: Traveled to cities I had always wanted to visit, made a couple of new friends who are quickly moving up the ranks on my list of Favorite People in the World, became a producer (with the credits and callsheets to prove it) and received several actual paychecks for my writing. This list of accomplishments is not to be interpreted as complete and utter bragging but as a reminder of how far I have yet to go and a message for everyone to do the same so that you can look back and inspire yourself to keep at it.

Maybe I've been listening to "Don't Stop Believin'" too many times, especially this version which I can't shake off...


Someone wise (I think it was Barbara Walters on The View) once said to ask yourself the following question: Would your former self from 10 years ago recognize and like who you are today? Let's see. Back in the summer of 1999, I had been obsessed with BSB's "I Want It That Way," did a brief stint at my uncle's debt collecting agency, shacked up with a bunch of middle-aged matrons filing books at the New Rochelle Public Library and didn't think much about life beyond the borders of Westchester County, New York. It had also been the year when I visited L.A. for the first time in my life (funny enough). Having just watched the series finale two months prior, I had been psyched to visit the real-life Melrose Place. Who knew, ten years later...

I think the Hiko from ten - hell, seven - years ago would be impressed by the Now Hiko. I think he'd want to be me. After seven years of countless Pinkberry pit stops, buttery buckets of Arclight popcorn and semi-narcissistic blogging about what I've done/who've I seen, I have come to the conclusion that I've made L.A. my bitch. It's amazing how many nooks and crannies I've covered in this city...From the ghetto-fabulous 99-Cent Store in Silverlake where I saw a drunk woman flash her boob in the dried food aisle to the seafood shack in Malibu where I once overloaded on fried clam strips...From the porn shop-riddled streets of Van Nuys to the glossy cosmetics countertops of Barney's in Beverly Hills...From the hipsterific coffeeshops of Los Feliz to the WASPy havens of Pasadena...I like to think that I have experienced more than the average Angeleno can take within such a time span.

Why spend cash on a sleazy tour guide when you have me to show you around for the cost of a nice dinner on La Cienega?

I'm starting to treat my Los Angeles Anniversary as a second birthday, another milestone reached during which I become another year wiser. And wiser is what I definitely feel whenever I glance at June 27 on the Edward Gorey calendar that hangs above my desk. Every year there's something great and significant to be learned. For instance, back in 2004, I learned the 110 Freeway is one helluva shortcut to Long Beach from downtown (among other navigational tidbits in this labyrinthine La La Land). In 2006, I learned that working on a critically-acclaimed network drama still doesn't get you an audience (or sponsors for that matter, especially when using Jesus as a vehicle for Vicodin). And it was last year when I had started acquiring a taste for real estate, realizing that I need to accumulate more assets in my life (Thanks Rich Dad, Poor Dad). For the first time, the word "adulthood" sounded less scary and more promising.

I know the lessons will never stop and will always be unexpected, some fun and some painful. This past year's lesson isn't so much a lesson as it is an observation: Success in this town isn't always measured by how many cars you have or how many properties you own. What really gauges one's level of success is how many people secretly envy you, how many ulterior motives linger behind every smile that greets you, how many unspoken wishes are made to be like you, to have what you have. Of course, this is subjective. Ego definitely plays a role in determining who you are and how delusional your outlook can get. Just because you're hot shit (for now) doesn't mean everybody wants a piece of you. Modesty can go a long way; it's a lesson that's often difficult to learn.

The older one gets (I might as well be considered middle-aged now, the standards are so fascinatingly warped in this city), the hotter the competition feels. For every Facebook status announcing your short film's festival screening, there are at least two more behind it, celebrating a friend's band landing a hot gig at the Roxy...or the recurring non-speaking role of Secretary #2 another friend just booked on the upcoming season of Mad Men. There's a silent game of one-uppance that's played almost every week amongst friends here. Bordering on full-blown bragging, these rounds of show-and-tell take the shape of email blasts (raising my hand - guilty), postcards passed around at parties, Evites celebrating a promotion, and IMs linking to personal red carpet photo albums. While some of these are genuine pleas for friendly support, others are just flashy ways of saying, "Look what I did!"

Pimping yourself out is a necessity here.

"I love the audience. And the audience loves me for
loving them. And I love them for loving me. And
we just love each other. That's because none of us got
enough love in our childhood." - Roxie Hart

And everyone here in WhoYouKnowville gets it. These L.A. folk happily play along, congratulating you on the book deal you nabbed and then downplaying it with an "I could do that." It all comes down to this: Everyone wants a piece of the pie, a slice bigger than the one before, and you have to roll with the punches, or in this case, the seemingly friendly pats on the back. I truly believe there's no other city where such ambition, delusion and rejection coexist on such a level (Don't worry, NYC, you're up there too).

And after seven years, I'm still loving the insanity of it all. Los Angeles, I'm in it for the long haul. Go ahead and blow those Santa Ana winds in my face. Jam those boulevards and freeways with asshole drivers. You can even dump into Hollywood more of the same fresh-faced (and competitive) wannabes who are just jonesing for a job with J.J. Abrams.

I've been back in Boston for almost 6 years and can't believe it.