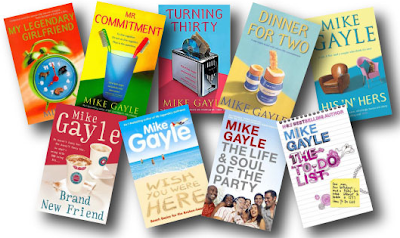 Yet another reason why I love all things British.

Only a few of Mike Gayle's books have been released here in the States, which is a shame and begs the question: Do his publishers fear we Americans won't get his style? Do they think his stories will get lost in translation?

The overall message that runs throughout Gayle's very readable novels is this: Life is messy and has no clear answers. His protagonists range from twentysomethings nursing broken hearts to thirtysomethings being slapped in face with the realization that reality more than just bites, it stings and eventually leads to pleasant surprises long after the pain subsides. In other words, they're so human it hurts. Very Nick Hornby-esque if you will.

The book that made me a die-hard fan: Dinner for Two. A music journalist loses his job, lands a gig as a "love doctor" for a teenybopper magazine, shelling out advice to puppy-lovesick tweens, and discovers he has a 12-year-old daughter as a result of a one-night stand in college. Think of it as About a Girl.

And think of adding "Read Mike Gayle novels" to your list of New Year's Resolutions.