It happened sooner than I had anticipated.

She died in a small parking lot behind a Starbucks in Studio City on a hot Saturday afternoon. I walked out, iced coffee in hand, and attempted to get her going. I was planning to get a head start on some Halloween costume shopping with Christine, my wardrobe stylist friend who wanted to take me somewhere deep in the Valley for some warehouse deals. All I got was a p-p-puttering that made my heart sink. My 2002 Ford Focus, the first car I had ever owned, the vehicle that helped me navigate the traffic-riddled streets of Los Angeles for the past 8 years, had died on me. Luckily Christine had some jumper cables, but they didn't help. The battery was fine. My two-month-old service report had said so. The engine was what was on its deathbed.

My car didn't always have the name Sydney. In fact, she didn't have any name until Kathleen came up with it sometime in 2003 while we were participating in our weekly obsession over the jaw-dropping Cliffhanger of the Week on Alias. It was simple as that. My silver 4-door sedan would be named after Jennifer Garner's character from one of my favorite TV shows at the time.

Sydney has seen me through road trips up and down the California coast: 2 roundtrips to San Francisco and Palm Springs and three visits to San Diego. She even got the chance to see Las Vegas in the fall of 2002 during a visit made by both my mother and grandmother. She got to conquer the curves of Mullholland Drive, suffer the potholes of Beverly Boulevard, brave downtown's warehouse district late at night, enjoy the scenery along Pacific Coast Highway, be manhandled by valets in Beverly Hills, get slapped with a few parking tickets in West Hollywood, sunbathe in parking lots across the Valley, and weather a few fender benders, one of which was my fault.

I will miss her spunk, her impressive sound system (for an economy car), and her decent MPG. What I will not miss: those manual windows and locks.

She was "born" on October 10, 2010 (that's 10/10/10) and was given to me in Santa Monica by a saleswoman who reminded me a lot of my favorite college professor. Perhaps that's what made the leasing go so smoothly...or trick me into thinking that I was getting a great deal. Actually, it was still better than spending my already non-existent fundage on the huge repair it would've taken to restore Sydney.

Nearly four weeks in, I can still catch that whiff of New Car Smell whenever I get behind the wheel. Nearly four weeks in, I've already topped 800 miles...and I've only filled the gas tank once. As I type this, I am still discovering new features (you mean I can control the radio and volume from my steering wheel??!!).

Picture it: Tuesday night. Beverly Hills. Having just finished some drinks and apps with an old high school pal on the rooftop of the Thompson Hotel on Wilshire, I retrieved my Prius from the valet (I was supernervous handing her over for the first time) and drove the 2.5 miles it took to get back to my apartment. I parked her in my garage and unlocked the hatchback to take out my Jack Spade messenger bag which was carrying my MacBook. What greeted me when I lifted the hatch was a sight that would make eco-activists cry and irony-loving assholes laugh: a pool of neon green paint covered half of the hatchback and oozed out of the car, spilling on to the concrete floor of the garage. 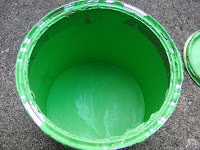 As for the inevitable question of What the hell was a gallon of green screen paint doing in my hatchback? I had been transporting it from the viral promo shoot I had produced with Michael for Fox during the weekend before. We shot the first day on a green screen at Atomic Studios downtown and had to purchase an extra gallon to do some touch-ups on the enormous stage we were renting: 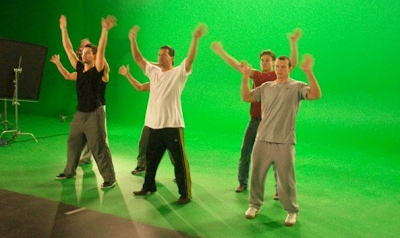 The promo was for the DVD release of Vampires Suck, but more on that later (once it debuts online)...

Not only did my $200 bag get completely ruined, some green had made its way through the brown wrapping of the art piece I had gotten reframed two nights earlier. Thankfully my laptop remained untouched. Half of the upholstery was soaked in the paint, some of it dripping down into the spare tire chamber and corner compartment. After spouting out several explicatives that would make a Turrets patient back away, I ran upstairs to get a bucket and towel and control the damage as best as I could. How could this have happened?

The valet. Everything was fine when I had given the keys to the valet. Did he pull a Ferris Bueller and go out for a joyride while I was recapping a decade's worth of my life to a guy I hadn't seen since I was 20? I mean, how could a hammered-shut can of paint flip upsidedown and break open?

Armed with a large ice tub full of water and a pair of old gym towels, I wiped up as much as I could while my hands and fingernails started to resemble the Hulk's. The water instantly turned green, and I immediately brought it over to the drain in the middle of the garage floor. It looked as if I were dumping toxic waste into the sewage system (actually, I was dumping toxic waste into the sewage system). It was past 11pm, and I had enough. I scrubbed my hands as if I had caught the Ebola virus and went to bed knowing that I would have to take the car back to the dealership to see how she could be cleaned more thoroughly by professionals.

In the morning the service crew at Santa Monica Toyota were taken aback by the mess in the hatchback. After explaining to them what had happened, some of them started waving their comrades over: "Man, you gotta see this!" Some huddled around, some scratched their heads. I had a feeling that I would become known at the service garage as the Dumbass Who Spilled Green Paint in His New Prius and possibly be added to a secret Top 10 list of Idiotic Customer Accidents.

Regardless, three hours, three cups of coffee, one breakfast sandwich, and 45 dollars later, the cleaning team miraculously managed to get rid of the paint. Except for a slightly discolored patch on the upholstered side panel (and some fumes from whatever potent chemical they used), it seemed as if nothing had happened. My baby was back to being new.

Which reminds me: I have yet to come up with a name for her. I can't keep calling her "Baby." And Sydney II is out of the question. Suggestions are welcome.

While you brainstorm, I'll have to get back to the mess that was left in the garage...

Getting down on my knees with a can of paint stripper and a wire brush,

Unknown said…
not sure what the name should be, but it better have something to do with Barcelona Red
5:16 PM

2) Everytime I named my cars, they died shortly after. I've since given up naming them.

3) 2 weeks into the lease with my brand new VW Jetta, I got into a MAJOR car accident (not my fault). I bought it when the lease ended, b/c it had barely a dent in it. We know how to break our cars in properly. ;)

Sorry about Sydney, but hope Baby treats you right. Just don't put her/him in a corner! ;)
7:11 AM

Gay Conservative Liberal said…
Congrats on the new car!! It's beautiful. Bummer re: paint.
7:29 AM