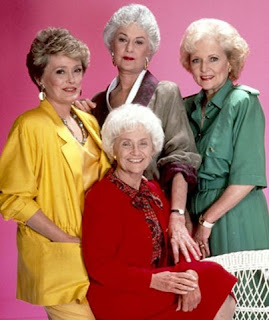 I am of the last generation of children who can remember what it was like to watch original network television programming on Saturday nights, particularly of the NBC sitcom variety. Before Saturday night became a junkyard of repeats, irrelevant specials, and low-rated reality fillers, it was once a comedic land of milk-and-honey. My earliest memories hark back to the late 80s when The Facts of Life aired first-run episodes, kicking off a two-hour block of sitcoms that came and went: 227, Amen, Gimme a Break, the short-lived Throb (anyone?), Empty Nest, Nurses, Mad About You... These were usually followed by a 10pm drama (Hunter, then Sisters, then The Pretender) which usually heralded my bedtime.

But the grandaddy (or grandmommy) of Saturday night sitcoms, for me and countless others, was - and will always be - The Golden Girls.

Upon re-watching the series from the beginning on DVD - a luxury only unemployment or a freelance career can bestow - I've learned a few things about these Girls. Some nuggets I've noticed after getting through the first five seasons include the following:

1. I've developed an unhealthy craving for dessert after every meal. This is undoubtedly due to the ladies' penchant for cheesecake whenever there's a social issue to address, an in-house conflict to resolve, or a love interest to talk about (basically every other episode). Can't sleep because there's something on your mind? Neither can Blanche. Or Dorothy. Or Rose. So why not go into the kitchen, open the fridge, and grab a knife and fork...Sophia won't be far behind.

2. Watching episode after episode is my own personal stress reliever. Perhaps it has something to do with the soothing, orchestral opening music. Perhaps it is the notion of living in a fabulous house with four liberal-minded women who have nothing but unconditional love for their friends, family, and each other. Perhaps it is the show's superb comedic (and timeless) writing that never ceases to make me giggle. Perhaps it also has something to do with the actual look and tone of the show itself; props to the production design team responsible for all of those pastel colors, floral prints, comfy accommodations, and just-like-Grandma's-house sensibilities. 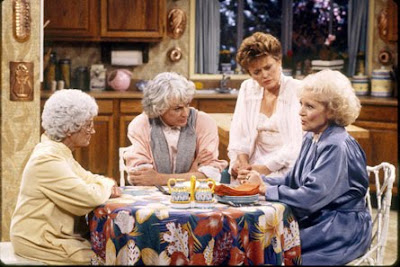 3. Whenever the Girls sit around the kitchen table Bea Arthur is always seated in the middle, facing the camera. She is never seen in any other chair. While the other ladies switch up their seats in every episode, her Dorothy never fails to be found in that centrally located position. Was it a requirement demanded by the former Maude star? I can just imagine the clause being written into her contract: "Actor's profile must never be filmed during scenes involving the ingesting of any cheesecake; camera is to never catch said actor's side view in kitchen scenes."

4. Although Dorothy's cross-dressing brother, Phil, was frequently mentioned whenever she and Sophia waxed nostalgic about the good old days in Brooklyn, we never met him in person. Out of all the relatives who popped in and visited that Miami house, Phil was a no-show...until later in the series when we learned of his untimely death and finally met him - in a closed casket. Maybe this is what sparked the trend of Sitcom Characters We Never See On Camera (ex: Maris on Frasier, Stanley Walker on Will & Grace).

5. That ingrained exclamation point on the inside of the front door - Was it a goof? Or did the production designer purposely plant that little Easter egg for viewers to pick up on? What. Does. It. Mean? According to eeggs.com, Bea Arthur carved it in there for good luck.

6. If St. Olaf had a Starbucks, what would one order? A venti gaflookanoogen latte?

7. The ladies sure know how to stay active (socially, that is). There hasn't been a charity event, black-tie ball, gallery opening, or theater production in Miami these women haven't participated in. May this be a lesson for all senior citizens (and non-seniors) out there; retirement shouldn't be equated with a life of stagnation and crossing off the days until you're admitted into your very own Shady Pines. As the insightful Nicki Minaj says, "I believe that life is a prize, but to live doesn't mean you're alive."

Off to go find my own Moment for Life,