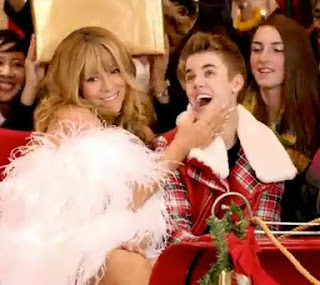 Five things about the recent music video debut for Justin Bieber and Mariah Carey's "All I Want For Christmas Is You (SuperFestive!)," the collaboration no one saw coming because, frankly, we were already used to (or prefer) the dozen or so versions of this 1994 yuletide tune from artists like Michael Buble, Lady Antebellum, and that little girl at the end of Love Actually (God, what a good movie).

1. There is indeed something superfestive about a Jenny Craig spokeswoman lip-syncing to a song she originally recorded 17 years ago, back when her current duet partner was a mere fetus.

2. Cheers to the publicity team behind Macy's for coming up with a way to lure more shoppers to its already overcrowded counters and migrane-inducing florescent lighting.

3. As blatant as that Nintendo 3DS product placement is, it isn't as obvious as the soft lighting Ms. Carey is now regularly utilizing whenever a camera is pointed at her.

4a. There's no way in retail hell that a department store stampede would be so calm and controlled.

4b. And something tells me the shots of Mariah and Justin frolicking in the sleigh was the only time the two had met (I sympathize with the line producer who had to balance the schedules of both pop divas to get this accomplished).

5. I'm pretty sure that wasn't the real West 34th Street outside.

Needless to say, I prefer the 1994 version.
Holidays music