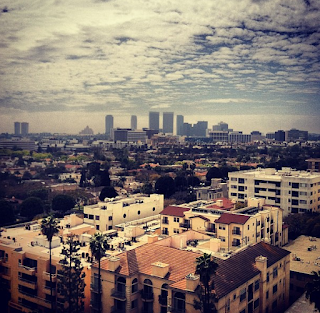 Last Sunday, while driving home from a lovely dinner with old friends in Venice (my old stomping grounds) I exited off the 10 Freeway to head north on the 405.

This exit ramp is one of many I've driven hundreds of times in my 11 years of living in Los Angeles. However, this particular ramp provides an unusual view of the city. On a clear day, in a span of two seconds (if you're a cautious driver like myself), you can be greeted by a unique panorama. As the ramp curves high above the surface streets and speeding traffic, there's the Westside to your left, the tall condominiums and office buildings of Westwood and the Wilshire Corridor straight ahead, and the cluster of faraway structures in Hollywood and downtown on your right.

This view is unusual because no one has ever really captured a shot of the city from this angle, despite the fact that Los Angeles is known for being one of the most photographed cities on the planet (and the least photogenic). This view also stands out because it reminds me of the commute I used to take during my first year as a California driver. I had taken this route every morning to Studio City from my humble abode in Venice (shout out to the Carsey-Werner crew of 2003-04). 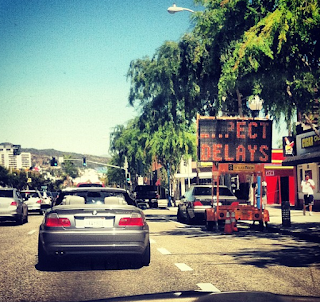 Today marks my anniversary of living in Los Angeles, which means I have now lived in the City of Angels for one-third of my life. A third of my life has been spent huffing and puffing (and hustling) my way through a city that promises so much, delivers so little (depending on who you talk to), and yet attaches itself to anyone willing to go along for the ride.

Every year I look back at the 22-year-old who took the plunge and moved across the country to pursue something more than just a job. I, like many of you reading this, had yearned for a new challenge, had wanted a new experience, and had sought after a new life that was all my own.

What I received was something I never expected. I've now created a history in L.A. In some way, no matter how big or small, I like to think I've made a mark on this place ("Hiko wuz hea"). Every sidewalk, every street, and every freeway has a memory attached to it somehow.

I've been fortunate enough to work in an industry that affords me new relationships with each job I work on (or "gig," if you wanna get all Hollywood), and I've made it a habit to remind myself of the friendships I have established over these past 11 years. I'm reminded of the people who continue to influence me, support me, and love me every time I drive home from a group movie outing, a birthday dinner, a kickball game, a night of cocktails, a "business lunch," a coffee date, a game night, a film festival party, a road trip to Palm Springs, a political rally... 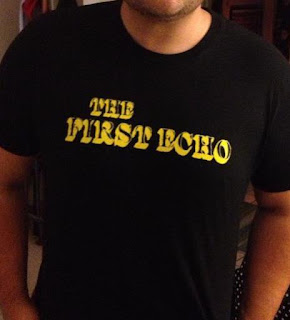 Perhaps it's a case Only Child Syndrome that has encouraged me to surround myself with people I can turn to -- and perhaps I can overanalyze myself at another time in another post. But here's one truth I know: they are the ones who have made my 11 years worth it.

Usually, with these anniversary blogs, I tend to look back on the lessons I've learned while continuing to look ahead at what the Universe is preparing for me. But I also have to remind myself that the lessons will keep on coming.

And I will keep on learning.