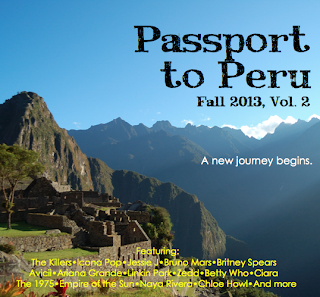 This next batch of songs has the fortune of being a part of my South American soundtrack when I journey down to Peru tomorrow.

I couldn't ask for a better collection of delightful earworms that will provide some much-needed entertainment on 8-hour flights, excursions through Machu Picchu, and late nights in Lima. Ears up, kids...

1. "High Society" by Betty Who - I'm kicking off things with the Australian chick who provided the song in that Home Depot marriage proposal that went viral earlier this month. Sure, "Somebody Loves You" is a great roller disco anthem from the 80s, but it's this catchier, sparkling gem that has made me an obsessed fan of the indie pop tart. It's perfect for any run-away-and-forget-your-problems scenario. Play it. Then repeat. And repeat again:


2. "Heart Out" by The 1975 - The 80s continue to make a comeback in this British alt-rock-pop ditty from a group that deserves some of your recognition. Press play over HERE.

4. "Shot At The Night" by The Killers - M83 produces for Brandon Flowers & Co. on this pretty awesome single that returns the group to its electro-rock roots. Listen HERE.

8. "Piano" by Ariana Grande - This girl's got potential, and this track is easily beats her current single, "Baby I":

10. "Work Bitch" by Britney Spears - As much as will.i.am may be ruining Brit-Brit's musical integrity with this derivative piece of club trash, it's still club trash you can get drunk to.