Augustus Gloop Was Once My Spirit Animal 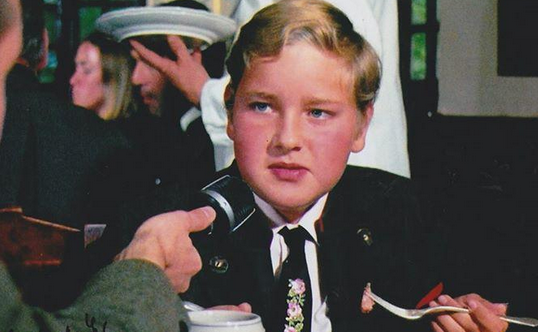 Beloved children’s author Roald Dahl was once the bane of my fifth-grade existence.

When I was 10, my class at New Rochelle Catholic Elementary performed a stage adaptation of his famous book Charlie and the Chocolate Factory. The production was directed by our art teacher (and school librarian) Mrs. Baron, a yellow-toothed, former flower child and Woodstock alumna with a penchant for puffing on Parliament Lights in the teacher’s lounge every afternoon. It wouldn’t be hard to imagine her spending her weekends knocking back shots of whiskey at an underground jazz club somewhere in the West Village, swaying to the tunes of a saxophonist named Johnny K and bopping to the bass in a haze of smoke – of course, back when you could puff on cancer sticks in Manhattan establishments. 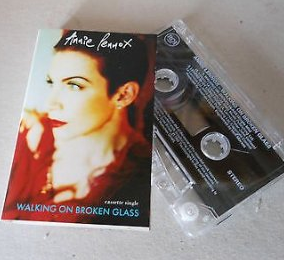 First, during art class, she allowed us to bring in cassette tapes from home, a sort of play-and-tell to stimulate our artistic instincts with every papier-mache sculpture and watercolor portrait she graded. In the corner of her art room was a small table on which sat a rinky-dink boombox next to a bunch of paint jars and brushes. It would blare bass-heavy singles from Dr. Dre, House of Pain, En Vogue, and for the alternative fans in the group, songs from Nirvana and Spin Doctors. However, my musical contributions to the class were, to say the least, not as popular as the others. Among the cassette singles I had brought in: Annie Lennox's "Walking on Broken Glass," Darryl Hall's "I'm in a Philly Mood," Big Mountain's reggae cover of "Baby I Love Your Way," (from the soundtrack to Reality Bites, which was actually a hit with some of my peers) and of course, anything from Christian-artist-turned-pop-star Amy Grant. The romantic Elton John and Kiki Dee power ballad "True Love," however, stayed at home because I was wise enough to avoid getting glue poured on my seat and face the subsequent snickering.

And through it all, Mrs. Baron never batted an eye when it was my turn to bring in music for the class.

Second, she was also the faculty moderator for the school newspaper, The Cardinal Chronicle, and gave me the creative freedom to write about anything that interested me, even if that included a very thorough recap of the entire second season of Melrose Place and a serialized column that was an homage to Beverly Hills, 90210 called (not surprisingly) New Rochelle, 10805.

Back to the play: Since there was no other 10-year-old in the school who weighed over 100 pounds, I was automatically cast as Augustus Gloop, the overweight kid who gets stuck inside a tube in Willy Wonka’s candy factory after he falls into a chocolate river and nearly drowns. He’s a chubby child who has been described as having “fat bulging from every fold with two greedy eyes peering out of his doughball of a body.” The wiki site for the 2005 Tim Burton-directed remake of the 1971 classic isn’t any more flattering: “He is a hungry, mean, foul, and very fat boy.”

I’m not sure how the casting decisions were made, so I can only imagine how it all went down…

MRS. BARON: “Well, we need someone to play Augustus Gloop.”

PRINCIPAL: “The fat kid? How about the Mitsuzuka boy?”

PRINCIPAL: “You got another student in mind?”

MRS. BARON: “I guess we could convince him with free pizza and a bag of Funyuns.”

Who needs an audition when you’re the only one naturally built for a role you were also destined to play? #Blessed.

Since Augustus Gloop is the first of four kids to get eliminated from the factory tour, my stage time was limited. I didn’t make it past the first half of the play, and that was totally fine with me. The acting bug didn’t really bite me as a child; I was more interested in the behind-the-scenes action and making tweaks to the script. (“Mrs. Baron, I don’t think a half-Asian Augustus would speak in a German accent. But I totally get where you’re going with the character.”) However, the way with which my character got dispatched did nothing to help my ego. 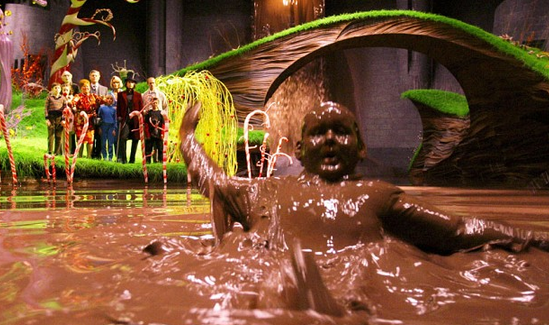 And before I go into that, I should mention that the budget for this elementary school production of Charlie and the Chocolate Factory made The Blair Witch Project look like Avatar. Props and scenery were built by the seventh- and eighth-graders of the school, and any costuming was provided by whatever our parents could procure from our closets at home. So when the time came for my character to fall into the aforementioned chocolate river, there were no flashy special effects. Not even a pair of cheaply made wave boards that could have been painted brown to create the illusion of a fudge-like liquid. Nope. Instead, Mrs. Baron decided to execute my grand exit by having me jump off the stage and run backwards while flailing my arms in the air as if being carried away by an invisible current. And as I stumbled in front of a crowd of laughing parents towards a doorway that led to the stageside stairwell, I did my best not to trip, fall, and prolong my humiliation – all in the name of live entertainment.

Then came the proverbial salt to be rubbed in the wound. A trio of Oompa Loompas, played by three of my classmates in hideous white overalls, came out to do their brief chant about Augustus Gloop’s demise. I believe it went something like this: “He’s so fat…he’s so fat…he’s so fat, he’s like a blimp.”

Not quite the deepest or most complex of lyrics, but it did the job.


Some literary critics and bibliophiles will be quick to tell you how Roald Dahl’s books have been accused of fat-shaming over the years. It’s as if the author had some kind of simmering, subconscious resentment towards overweight folks. The proof is in plenty of his stories. In Matilda, cake thief Bruce Bogtrotter is forced to consume an insane amount of cake as punishment, while in The Witches, the always eating Bruno Jenkins viciously gets turned into a mouse. (Do we ever really find out what happens to him?) Then there’s the “comically obese” Aunt Sponge in James and the Giant Peach, a character who gets squashed while trying to run away from the titular fruit. 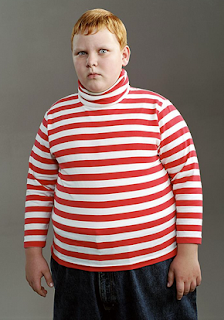 Augustus Gloop was one of the many portly characters portrayed as either villains or disgusting gluttons in these books, and the disturbing things that happen to them seem like Dahl’s way of dealing with some kind of pain he may have suffered in the past. Upon looking up his personal history (the extent to which only covers Wikipedia), I couldn’t find any prior events or pivotal moments that might explain his less-than-pleasant treatment of these fictitious fatties. However, there has been mention of him being bullied as a schoolboy. Perhaps one of his tormentors had been an overweight oaf who later became the inspiration for several of these characters. I guess we’ll just have to wait for the inevitable biopic to see what really went down during Dahl’s childhood. Which begs the question: Who would be cast to play him? After glancing at some old photos of the 6’6” writer, it looks like the role would call for “a young John Cleese type.”

Hollywood, good luck with that.

Luckily I was somehow able to move past my humiliating turn as Augustus Gloop during that one-night-only performance in the early 90s. If there had been any emotional scars, they were probably healed with a couple of strawberry sundaes at the local Friendly’s my grandmother and I frequented (another chapter for another day). But I do like to think that my stage debut helped me build some resolve and instill a little bit of confidence in my 10-year-old self. It was the first time I faced my own vulnerability and put myself out there – in front of my largest audience to date! I can still remember that initial rush of adrenaline when I first stepped out on that stage, concentrating on the few lines I had to say and temporarily forgetting the hundreds of eyeballs that would focus on me. It was an experience I can now appreciate in hindsight.

Besides, Augustus also helped me prepare for my next role, lumberjack/prospector Yukon Cornelius, in the eighth grade Christmas production of Rudolph and the Misfits. That was by far a much sexier role. Those boots! That plaid flannel! I even got to hoist a fake axe over my shoulder and strut my stuff across the stage as if I owned the place. Finally I was able to use my size and stature in a way that felt empowering. I had swag long before I ever knew what swag was.

Call me the Original Lumbersexual.

*This has been another excerpt from my upcoming book, How To NOT Stay Skinny.