Dealing with Double Negatives in a Negative World 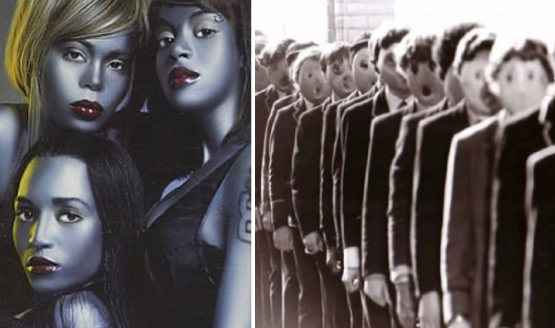 "He knows it is a graceless and condescending thing to do, correcting someone’s spoken grammar. Like being at a party and criticizing someone for not being well-read enough…”

I have a superpower.

I have only been aware of this ability until recently. However, what I perceive to be a superpower may be seen by others as an insufferable nitpick. So, it is both a blessing and a curse.

Whenever I hear a double negative, whether it’s in a song or in conversation, an alarm goes off that only I can hear. It is a blaring noise alerting me that grammar is being abused, so naturally, I find myself compelled to come to the rescue and right these wrongs.

Back in 1999, TLC’s “No Scrub” was a definitive summer jam. Back then, I bounced along to the She'kspere-produced beats, marveled at the Hype Williams-directed video, and attempted to learn Left Eye’s rap bridge. But now, if I hear it come through my car radio or through the speakers at my local supermarket (because that's how old I am; the songs of my youth are now relegated to the homogenized aisles of brightly lit retailers), I want to yell back, “I don’t want ANY scrub! You can’t use ‘don’t’ and ‘no’ in the same sentence while referring to the same object! A double negative actually expresses a positive! ARGH!”

Additionally, if "a scrub is a guy that can't get no love from me," then I am basically saying that a scrub is indeed someone I will give love to! Double ARGH!

In some cases I imagine myself going on a rampage, releasing my rage over this grammatical injustice, flipping over my shopping cart, and knocking over boxes of crackers that have been stacked neatly in a pyramid. From there, a pair of security guards would come out, restrain me, and forcefully escort me out of the supermarket while I scream at the top of my lungs, "It's a double negative! Don't you people hear it? It's a double negative!"

That TLC single isn't the only guilty party either. "We don't need no education"? Really, Pink Floyd children? You clearly do need a proper education based on your poorly structured chorus. 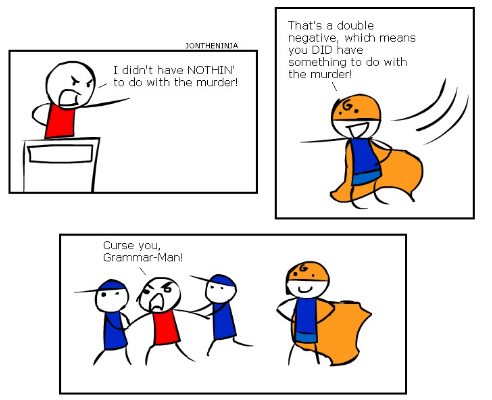 This ability, this skill, this "superpower" is clearly a result of twelve years of Catholic school training and several English teachers instilling in me proper sentence construction. Being an enormous bookworm who didn't have much of social life probably had something to do with it as well. Reading five to six novels per month, I absorbed the written word and became very familiar with the mechanics of language as it appeared on the page. I quickly learned how to speak good...I mean well! Speak WELL.

But sometimes I wonder...what does this say about me? Have I become one of those overly critical Grammar Snobs prone to eye rolls whenever they hear the improper use of a prepositional phrase or subject pronouns? He and I attended the Dua Lipa concert together -- NOT "him and I!" Do I secretly get a kick out of making these corrections because it makes me feel somewhat intellectually superior? Probably.

It's so easy to be critical nowadays. I am constantly inundated with news feeds displaying people's opinions on matters both important and mind-numbingly trivial. Every day I am guilty of interacting with the vast digital echo chamber that is social media, where everyone has something to say, and it's hardly positive. And with every knee-jerk reaction I have, I have to step back and practice some restraint, reminding myself that it may not be worth engaging in a comment pile-on that has metastasized into an ugly Ignorance Monster, especially when there's incorrect grammar or misspellings involved. (People's true colors come out as well as their socioeconomic status sometimes.) 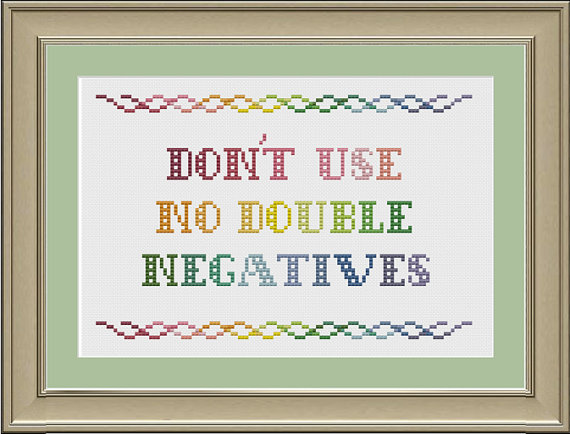 Top 40 radio, as little as I listen to it nowadays (ever since the dawn of digital streaming services) is a hotbed of double negatives. It has reached a point of no return, and I am certainly critical of a lyric that refuses to adhere to the Rules of Grammar. It makes no sense to me why it has to be sung incorrectly when a simple rewrite can keep the song's melody intact. "I don't want nobody but you"? Puh-lease. Of course, overall production value is also a determining factor in whether or not I will enjoy a song, but if it sounds dumb -- no matter how many arguments you can make about its earworm potential -- the Grammar Snob in me will think the song is for dumb people.

And there I go again, acting all high and mighty, contributing negatively to the world because I have no tolerance for what others may find tolerable.

Feel free to slap me the next time you see me. Actually, on second thought, don't.

I don't want no slaps.