Beyond Wonderland: 8 Hours of Glitter, Grooves, and Grilled Cheese The dust (and glitter) has settled.
I survived the 2018 edition of Beyond Wonderland at San Bernadino’s NOS Events Center where I was one of 70,000 dance music fans who traveled near and far to be transported down the proverbial rabbit hole to a psychedelic realm filled with curious creatures, peculiar plant life, and sensational sets from over 60 of the world’s top dance music artists. Here’s what happened among the neon lights…

I arrive shortly after the gates open. There are a few mud puddles from the previous night’s rainfall and a chill in the air (temps expected to drop into the forties by midnight), yet there are plenty of scantily clad festivalgoers in a variety of outfits ranging from Fairy Tale Chic to Dystopian Warriors to Cuddly Cartoons. I immediately regret leaving my unicorn onesie at home. 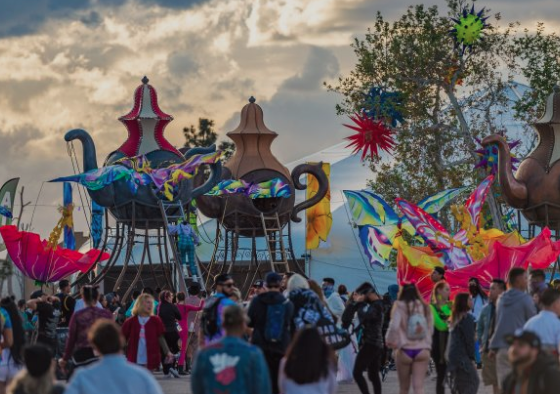 I do my inaugural lap around the premises. I stop by the Earth Emporium and applaud  its eco-friendly sponsor, Flow, for its “mindful hydration” efforts. I walk through the large Bar pavilion where the giant heads of the Mad Hatter and White Rabbit hover above patrons. I take a deep whiff of the meaty aromas coming from the Koji food truck. I take a mental note to visit the Ground Control Oasis and plop down in one of its large purple beanbags for a chillout session (if needed).

I enter the cavernous Queen’s Domain, where Christofi spins for an early crowd. The giant HD screens on stage display CG red curtains and animated playing cards. This is just a warm-up for what’s to come. 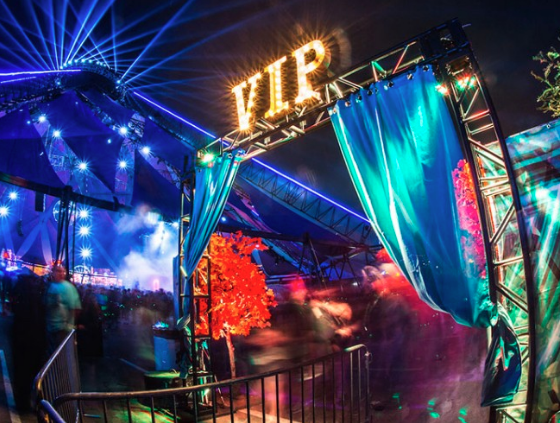 I find the VIP lounge. It’s a feast for the eyes…and stomach. There’s the Kandi bracelet-making station (I painstakingly find letters to spell out the name of festival, because I’m basic like that), croquet games, photo booths, cocktail stations, and plates of rainbow grilled cheese and glitter tater tots. I wait in line at the Beauty Bar (presented by Gypsy Shrine) to get my face glittered up for the evening. With a quick application of some hair gel and a mixture of blue-green-gold sparkles, I’m ready for my EDM close-up. 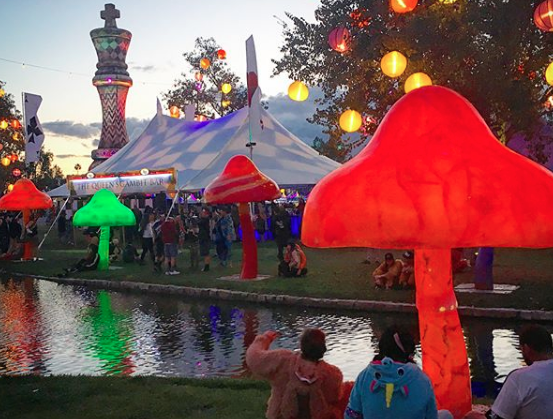 Inside the VIP lounge I attempt to take some selfies at an elaborately decorated table themed after – what else – the Mad Hatter’s tea party. It’s a colorful array of flowers, dishes, desserts (all plastic), and cups of all sizes. It’s one of several interactive photo ops within the comfy venue.

I meet the team from The Courtiers, the group of creative organizers currently making an impact on the festival circuit with their transformational entertainment and partnerships with sponsors like Swarm, a “decentralized commerce platform” that uses blockchain tech to build community through crypto currency (they have a growing presence at festivals like this one). Experiential stations are set up throughout the VIP lounge, all designed to give festival attendees a trippy yet substance-free experience — from VR headsets to spinning ThetaPods — showcasing the leading modalities in light, vibration and frequency (more on these later). I could stay in here all night.

Dinner is a bowl of pork belly fries. I bring it back to the VIP lounge, scarf it down, and take a whiff of some secondhand hookah smoke while sitting on a plush red couch. I make my way towards the back and test out a Sound Lounge, a “bioharmonic vibration bed” designed to send you on a therapeutic, sonic journey. I put on a pair of headphones (and a scented beanbag eye mask) and am soon lulled into the rhythm of a track with a bass that vibrates across certain parts of the bed. It’s literally music you can feel. The sensation is wonderful. 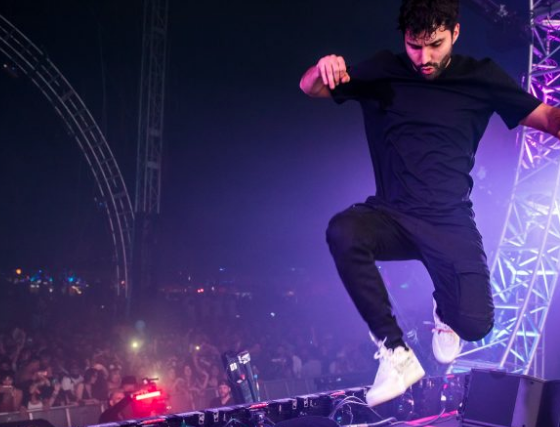 The blue curacao and vodka cocktail I drank earlier is kicking in. I let it wash over me and soften the hard dubstep I hear nearby.

Over in the Queen’s Domain, a DJ by the name of Yultron starts his set. The LA-born, Japanese-American artist kicks things off with a Star Wars-like scroll announcing his arrival, and the crowd loses its mind when they hear the iconic John Williams score.

I make my way over to the Mad Hatter’s Castle to catch Jax Jones, hoping he’ll play “Instruction,” his collaboration with Demi Lovato (one of my summer jams from last year). He does not. Or perhaps I miss it because I leave the massive tent shortly after he dives into some hard-hitting Latin house.

Back at the VIP lounge I crawl into a spinning ThetaPod that resembles of one of those sleep-chamber thingies you see on spaceships in any given sci-fi movie. I’m given a pair of sunglasses that create a “visual pattern light stimulation” (inducing a Theta state, assisting in entrainment). I close my eyes, the hatch closes, and I’m off on a psychedelic journey. Seven minutes later, I hop out. Thankfully, the dizziness only lasts for a few seconds. So I grab a chocolate eclair from the Mad Hatter’s table of pastries and tea.

Valentino Khan wraps up, and Tritonal comes on, sending the crowd on a euphoric journey that leads up to “Untouchable,” their hit dance collab with Cash Cash from 2015. Several Alice in Wonderland characters dance on stage. The Red Queen raises her arms against a giant screen of flicking flames. A resounding “Yaaaasss Queen!” would suffice here.

I succumb to the Happy Toast truck and order a rainbow grilled cheese. It is ooey, gooey, and satisfying AF. I dip each piece into a pink aioli that, to quote The Cure, feels like heaven. 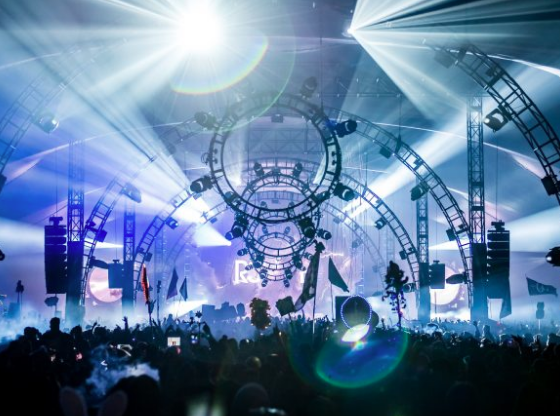 I run back to the Mad Hatter’s Castle and catch the tail end of a set by Mr. Carmack before R3hab comes on stage (above) with a dramatic opening and blows the crowd away with remixes of everything from Kendrick Lamar’s “Humble” and Cardi B’s “Bodak Yellow” to Calvin Harris and Rihanna’s “This Is What You Came For.”

I realize I have to stretch my legs, loosen up, and get some circulation going rather than stand in place like some curmudgeon dad forced to sit through a teenybopper concert with his daughter. I finally give into the music and bounce along to the beats.

As I walk out of the Mad Hatter’s Castle I spy with my little eye the first person to throw up into a garbage bin. Poor thing. 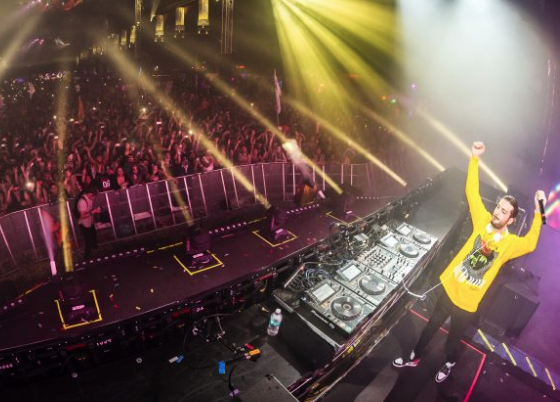 Alesso, the headliner inside the Queen’s Domain, commands the stage and pumps out “Under Control,” his 2013 hit with Calvin Harris and Hurts. The visuals that play on the screens behind him during his initial set are a macabre mix (bleeding skulls anyone?) that soon transition into more ethereal imagery. As I make my way to the back of the tent, passing twirling glow sticks and sparkly paper butterflies, the Swedish DJ breaks out “Heroes” with Tove Lo’s vocals filling the air during its anthemic chorus. Everyone sings along.

No, I’m not hallucinating. Those are indeed giant, flaming lily cups in the middle of the lagoon as I make my way towards the exit. I can now feel how cold the night has become. I feel for the girl in fishnet stockings and a silver bikini top. I shiver just looking at the shirtless dude whose body paint is smeared (but his frosted pink tips are still on point). Dozens of people are passing out flyers, stickers, and postcards for upcoming festivals. Once I’m outside, I receive a souvenir Beyond Wonderland poster as well as one for EDC, which is just two months away.
Til next time…
Email Post
Labels: music reviews Travels