My Weekend in Vegas with Jennifer Lopez 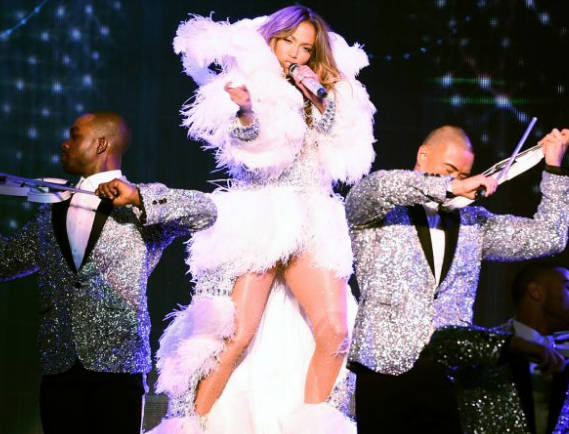 “Us,” the energetic dance track from global superstar and (current Las Vegas resident) Jennifer Lopez, came out earlier this year and has been on heavy rotation on certain 2018 summer playlists (okay, mine), but it’s her other track, “Dinero,” that is heating up faster than you can say “collaboration with DJ Khaled and Cardi B.”
The stylish black-and-white music video, directed by Joseph Kahn, was shot not too long before I hopped on a quick flight to Sin City earlier this summer to catch Jennifer Lopez: All I Have, the sensational show inside Zappos Theater at Planet Hollywood Resort & Casino. The trip was also a birthday treat for my New Yorker mother, who was turning 70 and has loved J.Lo ever since the Bronx native dropped her 1999 debut album, On the 6, and smoldered alongside George Clooney in Steven Soderbergh’s Out of Sight 20 years ago. “She’s so beautiful and can do no wrong,” she once told me. “And that butt!”
Therefore it made sense for me to nurture my mom’s girl crush and make some introductions once we landed (me from L.A., my mom from Tampa), arrived at the hotel, and looked up at the enormous billboard flaunting J.Lo’s abs underneath a slinky, diamond-studded bodice.
“Jenny from the Block, meet Sandy from New Roc,” I said. 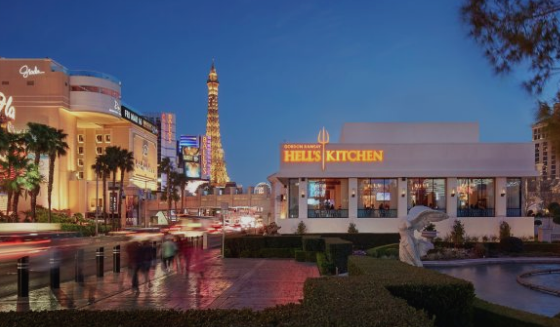 But first, dinner.
Gordon Ramsey’s Hell’s Kitchen at Caesar’s Palace was where we were treated to a feast that kicked off with pan-seared scallops topped with English pea puree and bacon lardons that were as delectable as the seared foie gras that followed. Entrees included Ramsey’s signature Beef Wellington (tender and flavorful) and the braised short rib (on a bed of creamy polenta) with sides of roasted cauliflower, wild mushrooms, and the gouda-and-prosciutto-filled mac and cheese. Hearty, savory, and undeniably belt-busting.
The restaurant, which opened earlier this year, was modeled after the set of the chef’s popular reality-competition show. Upon entering, guests are greeted by a hologram version of Ramsey (his moods rotate at random) and led into a dining room with enough pitchfork imagery and designs to make the Devil himself clutch his pearls. “Industrial hellscape” is a term a colleague of mine once used to describe the motif, and for a city like Vegas, such excessive decor makes sense here. (I was tempted to pocket one of the stylish slate-gray cloth napkins as a memento.) 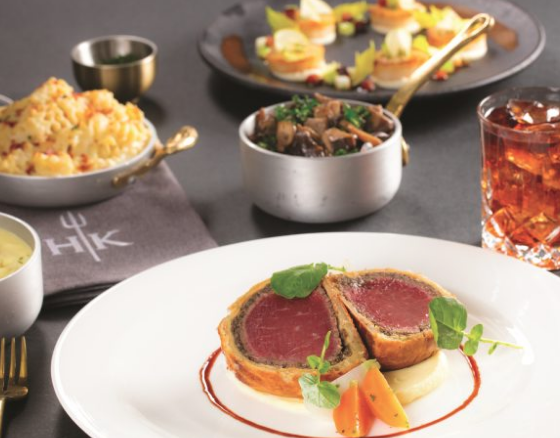 After a few more glasses of agua fresca and a shared bowl of sticky toffee pudding (I regret not ordering my own), we headed back to line up for the big show at Zappos Theater. A crowd had already formed outside the spacious venue that once hosted Britney Spears (Piece of Me) and is currently the home of Gwen Stefani’s Just A Girl and Backstreet Boys: Larger Than Life.
As for Jennifer Lopez: All I Have? It is quintessential Vegas entertainment. The show opened with a glittery explosion of diamonds set to a fabulously flamboyant, all-strings rendition of “If You Had My Love,” during which a showgirlish Lopez made her way down a grand staircase, flanked by men in white tuxedos. This transitioned into a riveting cover of Sheila E’s “The Glamorous Life” (fur coats included), followed by J.Lo’s 2001 hit “Love Don’t Cost a Thing.”
The rest of the show was an impressive production that spanned genres, styles, and set pieces. First, she took the crowd “back to the Bronx” for a hip-hop portion of the evening, rolling in on a subway car with dancers disguised as walking boombox speakers. She then took a breather, floating in on a rising platform, to deliver a rendition of Lee Ann Womack’s “I Hope You Dance,” a ballad that was dedicated to her 10-year-old twins and used to show off an epically long gown on which images and lights were projected throughout the performance. 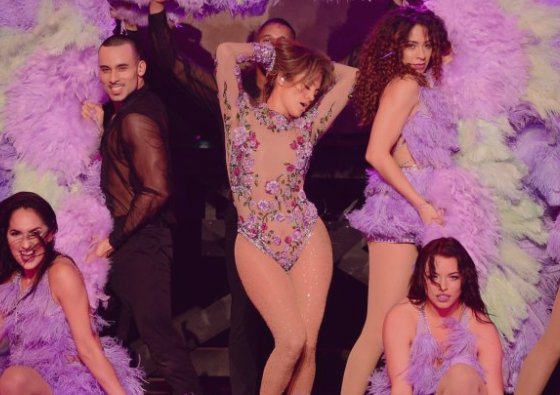 Then came some burlesque-inspired antics (“I’m Into You,” “Booty”), followed by some retro-flash, with the stage transforming into a 70s-era fantasia of funk to showcase songs like “Hold It Don’t Drop It” and “Ain’t Your Mama.” Next, a Latin-flavored medley kicked off with a silhouette of the singer appearing in one of three giant drums. She burst out just in time for a rousing performance of “Let’s Get Loud,” working the colorful stage with some killer hip thrusts.
And there were no signs of slowing down once the EDM-driven finale began. It was like stepping inside a rave that rivaled any dance stage at Electric Daisy Carnival, the festival that was unfolding just miles away at the time. A remix of J.Lo’s ode to Y2K, “Waiting for Tonight” included the requisite laser show before “Dance Again” and “On The Floor” closed out the show with — what else — silver and gold confetti. 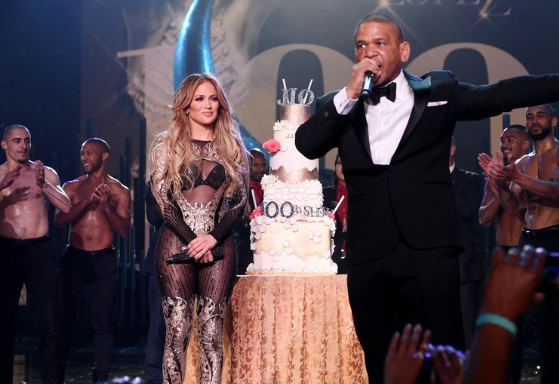 Shortly after our visit, Lopez celebrated the 100th show of her critically-acclaimed residency in true Vegas fashion: with a glamorous cake presentation on-stage and afterparty in the lavish Nobu Villa atop Nobu Hotel at Caesars Palace.
Dazzling the Strip night after night since 2016, Lopez has garnered impressive numbers throughout all 100 performances including:
Tickets for the final shows of Jennifer Lopez: All I Have (now through September 29) can be purchased here.
@TheFirstEcho
music reviews Travels