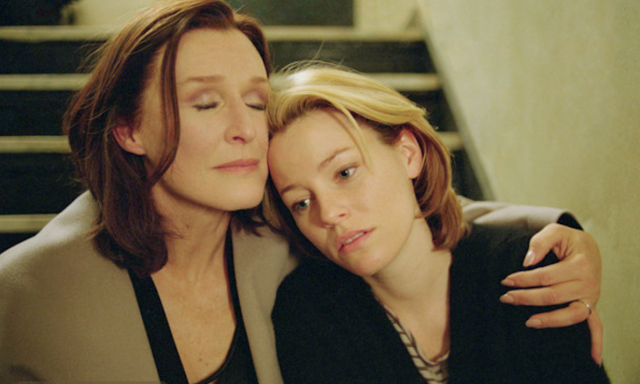 "That is the problem with us today, we can't remember what it feels like to be consumed by desire. We have forgotten PASSION."

And so concludes a monologue from Diana Lee, the award-winning actress and Broadway veteran who is seen wrapping up a masterclass at Julliard in the opening scene of Heights, a quiet little drama from the mid-aughts directed by Chris Terrio and produced by Merchant and Ivory, the powerhouse team behind posh titles like Howard's End, A Room with a View, and Remains of the Day.

Diana is played by a boldly brunette Glenn Close who makes an immediate impression on her fictional students (as well as the viewing audience). She is one of several New Yorkers whose overlapping narratives unfold over a compelling 24-hour period. Diana's open yet unhappy marriage prompts a flirty exchange with a young actor named Alec (Jesse Bradford) who auditions for her play while harboring a secret of his own. Meanwhile her daughter, twentysomething Isabel (Elizabeth Banks), is a struggling photographer who reunites with a former flame (Matt Davis), a welcome distraction from the pre-wedding stress she's going through with her boyfriend Jonathan (James Marsden), a Jewish lawyer whose past is being dredged up by Peter (John Light), a British journalist doing research for a profile on provocative artist Benjamin Stone.


Heights was filmed on location in New York City during the fall of 2003, debuted at Sundance in January of 2005, and was released by Sony Pictures Classics the following summer. Based on the play by Amy Fox, who also co-wrote this adaptation with Terrio, the movie first appears to come off as a new millennium heir apparent to John Guare's Six Degrees of Separation, albeit without the razor-sharp wit and satirical commentary on class.

On the contrary, Heights is actually one of the first post-9/11 love letters to Manhattan, peppered with a few scenes that hover over the massive void where those towering buildings once defined the skyline. It's a moody yet watchable time capsule of a freshly wounded yet changed city (and world) that holds up relatively well fifteen years after its release. The device of split screens in some moments is almost quaint now, a signature of early 21st century indie filmmaking. The minimalist score by Ben Butler and Martin Erskine also manages to capture the melancholic tone that runs throughout. And while the movie does present itself -- through a 2020 lens -- as a collection of vignettes featuring Privileged White People in the World's Most Diverse City, it hums along at an assured pace and is carried on the shoulders of its capable cast.


Then there's the ridiculously fantastic supporting cast we must talk about as well, the familiar faces that accentuate these intertwining tales: Isabella Rossellini, in a delicious cameo, pops up as a Vanity Fair editor. Singer-songwriter Rufus Wainwright appears as one of Peter's interviewees, subtly stealing a scene inside Big Cup, the trendy Chelsea coffee shop that is now long gone. Denis O'Hare (American Horror Story) plays Isabel's boss in a blink-or-you'll-miss-him moment. Veteran writer-actor Eric Bogosian brushes shoulders with Diana as a theater director. Comedian Thomas Lennon is delightfully douchey as Jonathan's intrusive coworker. Welsh actor Andrew Howard (Watchmen) is a party guest of Diana's who forms an unexpected bond with Isabel. George Segal shows up as a fatherly rabbi who counsels Jonathan and Isabel. And a young Jim Parsons, a few years before being introduced to America as Sheldon Cooper on The Big Bang Theory, delivers several lines as Alec's fellow cater waiter at what can only be described as a sex performance art party.

In hindsight, Heights appears to have been a calling card for writer-director Chris Terrio, who would go on to win an Academy Award for Best Screenplay for 2012's Argo and then co-pen the script for 2019's Star Wars: The Rise of Skywalker with JJ Abrams (among other blockbuster material). It's a movie I have revisited several times over the years, picking up on nuances I had missed during previous viewings, always wishing I could know more about these characters once the closing credits roll (especially after a climactic twist involving Jonathan that was probably a bigger deal back then). It's a film I have appreciated more and more ever since I treated myself to a solo matinee of it at the small independent theater inside the now gutted Westside Pavilion mall in West L.A.

It's a #TBT title worthy of checking out if you're stuck at home like...well, everyone.

Oh, and if it matters, Glenn Close really rocks that hair.