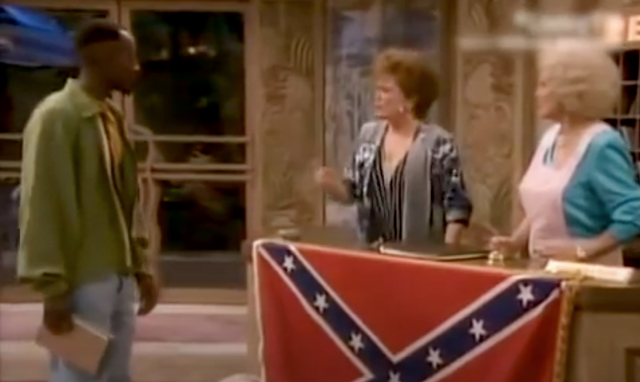 Now that Hulu has dropped "Mixed Blessings," the 1988 episode of The Golden Girls featuring an interracial marriage between Dorothy's son and an older black woman that some people argue contains a blackface joke (or not), it's time to bring a little more positive attention to a 1992 episode of The Golden Palace, the short-lived spinoff that featured three-fourths of the girls buying a fledgling Miami Beach hotel and employing a small crew of co-stars. (It's also considered the unofficial eighth season of the iconic, original sitcom.)

This particular episode, titled "Camp Town Races Aren't Nearly as Much Fun as They Used To Be," originally aired in 1992, and I can't help but think this was written as a result of the social unrest brought on by the aftermath of the Rodney King police brutality case earlier that year. However, it is eerily, devastatingly relevant in 2020.

Here, when the Daughters of the Traditional South are set to arrive at the hotel, Blanche (Rue McClanahan) hangs a Confederate flag on the front counter. Hotel manager Roland (a young Don Cheadle) makes it clear that its presence is not welcome, and the two of them have to reach an understanding...


Although the storyline resolves itself in the traditional sitcom way, tied up before the closing credits (we know one can't just wrap a bow on an issue like this one and then call it day), the episode still resonates and proves just how progressive these ladies continued to be after seven previous seasons of fearlessly facing every social issue and controversy there ever was at the time.