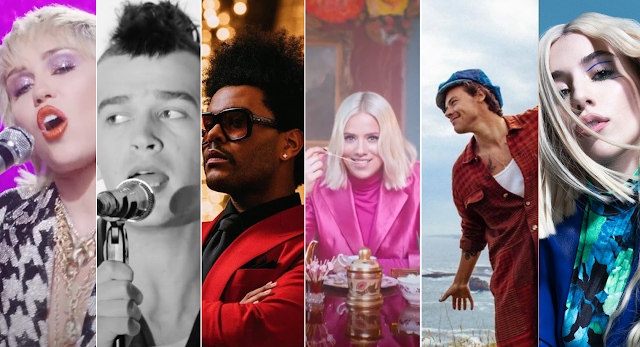 Given the kind of year it was, it makes sense that my favorite songs of 2020 all share a certain retro vibe that transported me back to certain eras from the past forty years. These are the men and women who produced earworms, crafted lyrics, and gave good vocals to help me (and some of you) get through our national crisis...

1. "Midnight Sky" by Miley Cyrus - Here's the thing: Miley is well aware of your Stevie Nicks comments, and yet she went ahead and delivered this glorious slice of rebellion that she admits is inspired by the Fleetwood Mac queen. The result is an irresistible 21st-century homage to "Edge of Seventeen" that manages to do what so few songs in 2020 could: get better with every listen. And if it wasn't exactly your rhinestone-studded cup of tea, she "don't need to be loved by you."

2. "If You're Too Shy (Let Me Know)" by The 1975 - The group's best track from Notes on a Conditional Form is a synth-and-sax-driven burst of joy straight out of the soundtrack from a 1988 Brat Pack rom-com.

3. "Friends in the Corner" by Foxes - "Everybody's looking like they need someone..." And so goes the chorus from the British singer-songwriter's single, an anthem that taps into the many conflicting emotions that many of us have been dealing with during this past year. The gorgeous, mid-tempo track was originally written in remembrance of a loved one, but given the way 2020 kept rolling out the punches, the lyrics have taken on a devastating double meaning, diving deep into themes of nostalgia, longing, and overall melancholy.

4. "Come Over" by Dagny - The Norwegian pop star gave us the most effervescent single of the year with a sparkling chorus worth repeating while you daydream about your crush. And "with the sun on your skin as I'm taking you in" is quite possibly the sexiest and most delicious lyric to sing to while you pine away.

5. "Adore You" by Harry Styles - The former One Directioner proved to be the most interesting and innovative artist of the group when he dropped the funky-folksy-fantastic Fine Line that earned him comparisons to David Bowie and Peter Gabriel. "Adore You" is a silky-smooth record that feels familiar yet fresh at the same time. One of the most original songs of the year.

6. "Kings & Queens" by Ava Max - This standout from the pop newbie's debut album gave us shades of (dare I say) early Gaga. With its rousing chorus and empowering rally cry, we could possibly be witnessing the birth of the Next Great Pop Diva.

7. "Blinding Lights" by The Weeknd - Despite the Grammy Snub Heard Around the World, Abel outdid himself with this slinky, synthy entry into his After Hours era. Propelled by a pulsating beat and accompanied by a slick music video, "Blinding Lights" became yet another seminal hit in an already iconic career.

8. "Wild Girl" by Kito feat. Empress Of - Call it nu-house. Call it catchy as hell. Call it the song I wish I could dance to in a bar or in a sweaty Zumba class.

9. "Deep Blue" by The Midnight - The synthwave duo (a.k.a. Tim McEwan and Tyler Lyle) returned with a track that is essential listening for anyone looking to channel their inner Andrew McCarthy or Jami Gertz circa Less Than Zero. With enough saxophone to transport you back to the late 80s, they have packed "Blue" with plenty of smooth vocals and nostalgic vibes to keep you riding high in 2021.

10. "Bodies" by The Knocks & MUNA - One of my favorite collaborations of 2020 was a stealthy one, a song about summer that snuck into my music library well after our tumultuous hot American summer. I still don't know what "bodies in the basement" really means (Subterranean sex? A place to hide corpses?) but I do know that these two groups, when put together, make magic.

A VERY HONORABLE MENTION: Chromatica by Lady Gaga - Upon a first listen, Gaga's sixth studio album simultaneously sounds like a welcome return to form and a retread of 90s house and early 2000s Euro-pop. Yet underneath all of the sheen and glossy guest appearances is a compelling message about misery, mental health, and managing the occasional existential crisis. Besides the stellar singles that seem to get better with every spin, "Enigma," "1000 Doves," and "Replay" are the tracks worth revisiting in order to dig into the psyche of a pop icon who proudly puts her demons on display. Listen to the whole damn thing (non-stop) here.

AND ANOTHER: Future Nostalgia by Dua Lipa - I'm not a complete idiot. (God, "Physical" alone...)