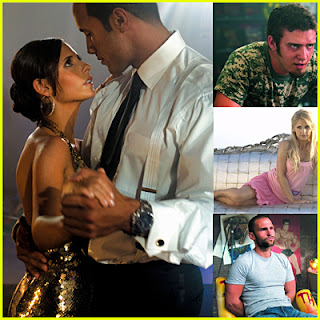 It seems like I am the only person I know who had been heavily anticipating Richard Kelly's ambitious, apocalyptic follow-up to one of my favorite movies of all-time, Donnie Darko. This all-star epic has been so under-the-radar, I assume that a good number of you who read this are probably hearing about it now for the first time.

Blame the publicity nightmare of a reaction (the questionable casting!) that came out of Cannes...in 2006. Blame the writers strike; there's no sign of a press junket, and there are hardly any talk shows on which its stars can promote it. Blame the delay due to the constant retooling the young writer-director had to endure (remember, this was supposed to be in theaters over a year ago).

Whatever the obstacles, however many warning flags were raised to hail this as one cinematic hot mess, it's out now...and I frickin' loved it.

The nutshell: Dwayne Johnson plays a movie star with amnesia who teams up with a porn star (Sarah Michelle Gellar) and an anxious cop (Seann William Scott) to expose a government conspiracy that eventually causes the end of the world during the 2008 presidential election. Oh, and then there's Justin Timberlake who plays a drugged-out and disfigured Iraq veteran (and Bible-quoting narrator), Mandy Moore at her bitchiest and Miranda Richardson who plays the duplicitous wife of a senator looking to get inside the Oval Office with the help of a corrupt corporation run by Wallace "Inconceivable" Shawn. Next, throw in some time-travel, a Kevin Smith cameo, and bizarro turns from Bai Ling, John Larroquette and Cheri Oteri (as a Marxist-like revolutionist), and you have yourself a satirical smorgasboard of dystopian delights accompanied by a hypnotic score from Moby. 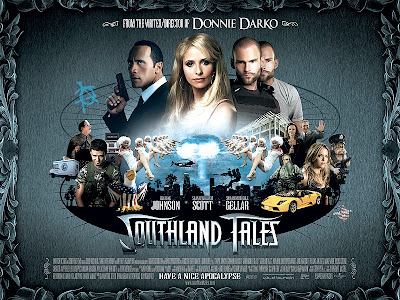 The mind of Richard Kelly is an awe-inspiring thing. To create a world filled with out-there characters and a dozen storylines to track is one thing, but to pepper it all with unorthodox ideas and themes takes brass balls. To call this a Gen-Y-friendly version of Brazil would be trite and do a disservice to the insane amount of effort and imagination that went into what will surely be a cult classic (tsk-tsk to Beowulf for hogging all of the box office receipts this weekend). And I call it that because what is a movie that frustrates the mind with its chaotic acts and demands repeated viewings? I already await the director's cut on DVD since I noticed one its many random co-stars, Janeane Garafolo, was cut from the final print. The deleted scenes are just screaming to be watched someday (mind you, it now clocks in at a heavy 2 hours and 25 minutes). Watching this movie, I got the sense that there was a whole lot more we weren't getting, plenty of layers we barely scratched.

May I also suggest breezing through the graphic novel trilogy-prequel (the movie opens with Part IV). I was lucky enough to get my hands on the advance copies through a friend of the director's, and the film was still a giant pill to swallow. Granted, it's a pill some won't want to take.