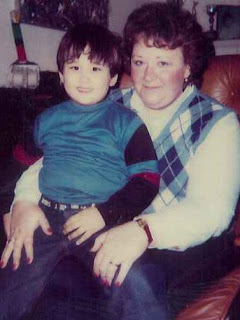 Today is my mother's birthday.

She's hitting a milestone, a number I'm sure she wouldn't want to me plaster across cyberspace for complete strangers to see (hint: she's as old as Israel).

My mother's birthday always hovers near Mother's Day (sometimes on the same day), and this always poses a challenge for me. Would a son dare to pull a twofer and celebrate both occasions with one gift? Well, maybe. But there's always two cards!

This year, I'd like to accompany my birthday greetings with a show of thanks for my mom's love and support throughout the past 28 years.

Thank you for allowing your only child to leave the nest and trek to the other end of the country in pursuit of a dream. Know that every time someone compliments me or tells me I'm amazing, it's because of you. Know that every time I am adored and told I'm a wonderful person, every time someone tells me that they love me - know that it is you who has made me so wonderful, so lovable...just so damn great. Next time someone compliments me or thanks me for being a part of their life, I'll tell them, "Thank Sandy Mitsuzuka."

I remember your surprise 40th birthday party. I was 8, and no one in the family had filled me in on the secret (did I have that big of a mouth?). We had gone shopping in White Plains, spent some time at the Galleria and enjoyed lunch at Mr. Greenjeans. Remember that place? The Max Headroom TV sets, the sketches of 50s celebrities hanging from the wall, the giant glasses of iced tea, the blinking traffic signs randomly posted above the booths? After our meal, Aunt Carol and Uncle Dave drove us down a long and winding road outside the city (I think it was Tarrytown) to a non-descript building for an Italian dinner, just the five of us. We parked, got ushered down a hallway and led into a catering hall where a crowd of our family and friends scared the crap out of you and made you cry for a good ten minutes.

I pretended to know what was happening, that I had gone along with the ruse. I couldn't fool anyone for long because there was a plate of chicken parmigiana with my name on it that I couldn't resist.

My random Mom Memories range from the most cherished to the most insignificant.

Before that 1988 birthday bash, to help you get ready for New Year's Eve, I had picked out an evening gown for you to wear while we wandered the aisles of Macy's at the New Rochelle Mall. It was a purple number with black polka-dots, shoulder pads wide enough to support two trays of hors d'oeuvres. My fashion sense seemed to have kicked in at an early age, though it thankfully never inspired me to join the bitchy roster of finalists on Project Runway. Instead, I fell into the ways of the writer, influenced by the authors I grew up with and the books you introduced me to (Agatha Christie was to you as R.L. Stine was to me).

"Where do you get it from?" you usually ask, referring to my knack for spouting out descriptive diatribes on the mundane, and maybe it's a skip-a-generation type of thing. Do we have an established scribe in the fam? Any authors on the family tree we don't know about? Perhaps a hush-hush connection to Truman Capote or Jack Kerouac? There's also my idiot-savant-like ability to remember every small detail from the past. While I can remember where we were when we first heard Rick Astley on the radio and thought he was a black guy (coasting on the Hutchinson River Parkway in your brand-new Pontiac 6000-LE, FYI), you, Mommy Dearest, probably forgot who the killer was in that Murder, She Wrote episode you've seen five times on A&E (it was Morgan Fairchild in the library with the revolver).

And you can't help it because, since 1990, you've explained to people that you suffer from a syndrome known as CRS (Can't Remember Shit).

So, please accept this entry as a part of your belated birthday gift. That metallic, bubble-wrapped packet should have arrived in the mail by now. It's not much, but know that I am still working on "hitting it big" and planning to treat you with a birthday/Mother's Day gift that shall eclipse all birthday/Mother's Day gifts: A tour of Egypt in your very own powder-blue Volkswagen Beetle steered by Gregory Peck circa To Kill A Mockingbird (Apparently I discover time-travel in this dream scenario as well).

And if Mr. Peck isn't available, I can always try to work my connections to Antonio Banderas and George Clooney.

Anonymous said…
Hahaha awww this is really sweet.
P.S. My mom's bday was yesterday and ALSO lands on in that Mother's Day area where you sometimes choose to give a conjoint gift. This year, since it's the first mothers day/birthday celebration that I am 3000 miles away for, I figured it was only right to seperate the two. :)
10:18 PM

Anonymous said…
That was beautiful, Hiko!

Of course, I had the song "Sandy" from Annie in my head when I saw the subject line: "Saaaaaaandy! Sandy's his name, if you please. If you don't believe me, ask any one of the fleas!"