The Life of a Pop Culture Correspondent Remember that Three's Company episode where Jack was panicking over the arrival of a famous food critic who was coming in to review his bistro? The reviewer was a stuck-up prick who couldn't give poor unlucky Jack a break.

That's the way the media has usually portrayed critics - tightassed, anal-retentive snobs who think they're above everyone else, their attitudes probably stemming from years of being nobodies with ignored opinions and sad social lives.

In no way whatsoever do I consider myself a critic (several more paid writing gigs and a byline in Entertainment Weekly, then you can get back to me), but I'm starting to understand where the sentiment is coming from. After a while, critics/commentators/reviewers develop a sense of entitlement. They feel the pressure to live up to expectations, to provide the masses with what they think is worthy of their attention via witty commentary or snide remarks. However, some of the commentary can turn bitter, hateful, and that's a major turn-off. It's classic Revenge of the Nerd. Someone who has been put down and snubbed in the past finally breaks out and stamps on those who once thought he was nothing but a waste of air. 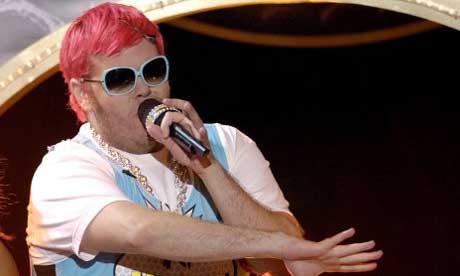 I hesitate to use him as an example because I've gone so long without typing his name on this site, but look at Perez Hilton. Sidenote: I'm actually one degree of separation away from the Queen of All Media. He used to work at the same magazine as a friend of mine, and I met him once before he decided to go all Hair Color of the Month. He started from nothing, AS a nothing, and caught everyone's attention by posting daily malicious gossip that was easily accessible to an audience hungry for it. Yes, he's built himself a little empire (VH1 specials, clothing lines, etc), but is it me, or has he finally outdone himself? And dude, what's with the 'tude? Last summer I was a witness to an amusing brawl he had with a lesbian security guard at a film festival party, an incident straight out of the slapsticky world of Jack Tripper and Friends.

And did you see/read about his 30th birthday bash? The bitch (and I used the term endearingly) had it sponsored by dozens of products he gets for free every week. That sense of entitlement? It's all there. In a way, he's blurring the lines between blogger and critic with the way he's acting, and that may not be a good thing for the rest of us who have yet to dominate the domains out there in cyberspace.

Sure, I'm a little jealous. He's raised the bar in the blogosphere and inspired countless others to create their own pages of passionate pop culture ponders. As much as it may disgust you to realize it, he's a kind of pioneer.

Recently, I have become inundated with free products myself, mostly from a publicity firm that relies on my bloggage (mostly on HOT IN HOLLYWOOD) to promote books, DVDs and CDs from their clients, whether or not I like them. And I can't help but feel a little tingle inside, a slight joy from feeling like I'm getting away with something. You mean to tell me, if I promise to write about it, you'll send me free shit? Is it really this easy? Honestly, it's pretty sweet. I'm a kid in a giant candy store...except the candy is books and DVDs and CDs...so I guess I'm a dork trapped in my own personal Best Buy. However, my room is getting more cluttered with every shipment I receive. This just means I'll have to eventually resell it all to Amoeba, replacing it with more crap, or have one helluva time during the holidays when I run out of gift ideas.

And it doesn't stop there. Apparently, if you consider yourself a blogger extraordinaire and write for a pretty legit website that attracts a decent amount of traffic, you can also be considered a member of the press and apply for the coveted Press Pass, which is basically free entrance to all types of hot events. This is something I've only learned in the past couple of months. Last week I received my badge for July's Comic-Con International in San Diego, a pop culture junkie's wet dream. And this week, I look forward to being added to the press list for Electric Daisy Carnival later this month in downtown L.A. (where I hope to meet BT and worship his live sonic skillz among a bouncing crowd of thousands). "What makes a blogger extraordinaire?" you ask. The prerequisites are rather simple:

1) Be grammatically correct and a good speller (proofread and edit the crap out of yourself).

3) Be passionate about what you're blabbering about (engage your readers - no one wants a boring list of things you did over the weekend, the highlight being your purchase of the Persian rug you've been eying for months at a flea market).

Sometimes I look at blogging like an addiction (Must. Talk. About. Linsday's. New. Single), but most of the time I consider it a therapy. Instead of going to a shrink, I can visit my local coffeeshop, plop down on a plush chair and vomit my thoughts onto my laptop and into the cyberunknown where RSS feeds and trackers can turn me into one of the millions of blips their radars. And in some serendipitous way, the blogosphere will surprise me with some validation every once in a while ("Europe loves you!"). Who needs human interaction when I can always rely on some lovin' from DevoLuva77 and BabeeGrl19?