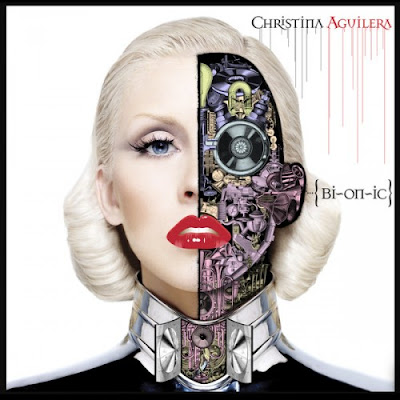 Had JC Chasez not already taken the name Schizophrenic for his solo debut back in 2004, Christina Aguilera may have wanted to consider using that title for her latest album. The Dirrty Mom's fourth studio album (really, that Spanish album, Christmas collection and bootleg LP didn't count) marches in like an electro-alt-pop lion and goes out like a vulnerable lamb.

One thing's for certain: the girl can do ballads, which are rare to find in Top 40 Radioland nowadays since every Auto-Tuned Tom, Dick and Ke$ha is (unfortunately) dominating the landscape. With "I Am," Christina wisely tethers her powerhouse vocals to channel her inner Regina Spektor while following a lyrical structure of which Alanis Morissette would approve. "You Lost Me" could have been a lost track from her previous effort, 2006's Back to Basics, as it comes off more as a bluesy plea for forgiveness...and attention.

As for Xtina's electronic punk side, "Elastic Love" is a jolting exercise in experimental techno-pop. "Woo Hoo," the follow-up single that shouldn't have been the follow-up single, employs Lil Kim enemy Nicki Minaji to provide a dancehall vibe that sounds a tad too familiar. The title track is a hip-hop-tinged groove that Timbaland probably wishes he produced. "Desnudate" unabashedly cribs from Britney's "Get Naked," only adding a few Spanish words to remind us that Christina's got some Latina roots she needs to tap into every so often.

Among her strongest tracks, "Prima Donna" acts as the album's obligatory look-out-world-I'ma-run-this-joint anthem. Slow jam "Sex for Breakfast" is reminiscent of early 90s Janet Jackson. "Lift Me Up" is clearly Bionic's "Beautiful" (for those who caught her performing this power ballad during February's Haiti benefit, you know what I'm talking about). "My Girls," her collaboration with electro goddess Peaches, is tailor-made for Saturday night joyrides (as is the stomping "I Hate Boys"). And "Vanity" is a tongue-in-cheek ode to overinflated confidence: "I make myself so much wetter," boasts our cocky gal. It's a total throwaway, but it sticks. 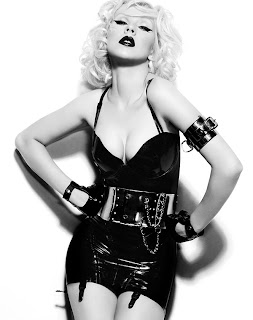 As for those bonus tracks found only on the Deluxe Edition, Christina gets her Blondie on with "Monday Morning," transforms into a hollaback girl on "Bobblehead," and wades in electronic bliss on "Birds of Prey," a hypnotic, supersonic piece of trancey fluff.

It's unfortunate that the inevitable Lady Gaga comparisons are overshadowing the apparent effort and talent that went into this album. Sure, Gaga may be the standard du jour in Pop Divadom, but let's not forget just how reinventive Ms. Aguilera was at the turn of the 21st century. May I suggest revisiting the "Fighter" video to note how drastic of a transformation the former Mouseketeer went through in order to prove herself. In a perfect pop music world, Bionic and Back to Basics should have swapped release dates. Perhaps B2B would have stood out more and fared better (critically speaking) in the current pop climate, avoiding any Gaga-related backlash. But then again, you can't tell an artist what to do, especially when their music is a self-proclaimed autobiography, an emotional display of where they are, spiritually/sexually/physically, at this point in their life.

Clearly not her strongest album, Bionic still outshines the efforts of most pop artists in terms of ambition and scope, a feat that gets trickier to accomplish in a market where album sales aren't what they used to be.