Eight Is Not Enough

When I moved to Los Angeles eight years ago today, a movie ticket at the Arclight was a mere $11.50, the Target in West Hollywood had yet to drain the wallets of countless singletons looking for a deal on laundry detergent, and the 101/405 Freeway interchange in Sherman Oaks was under construction, making the over-the-hill commute a daily pain in the ass for anyone with a job in the Valley.

When I moved to Los Angeles eight years ago today, I slept on an Aero Bed on the floor of several apartments, my DVD library consisted of 20 movies, I listened to my pop compilations (gulp) on a Discman, and the thought of housesitting in the hills and driving the boss's Lexus for three months seemed like something straight out of an 80s movie starring James Spader or Michael J. Fox.

If I were to dig up old pictures of myself from the summer of 2002 (actual photographs, mind you; I didn't own a digicam until the following Christmas), I would see a fresh-faced Boston University grad, unsure of himself, a little scared, a little clueless, but a whole lot of excited. The blueprint for the rest of my 20s had been as follows: become a PA, transition into a writer's assistant on a show, be surrounded by scripts all day, perhaps become a script coordinator, get handed an episode to write on my own, pump out a couple of specs, land some representation, become staffed on another show, rub elbows with a showrunner, sell my own pilot (like Josh Schwartz), become an executive producer and ultimately squeal with delight as I see my name credited on screen.

Needless to say, that particular trail was never fully blazed. However, the path that I have taken instead has not been so far off. Eight years ago I couldn't have imagined where I would go, who I would meet, what I would experience. And for those places that I have visited, for those special individuals who have touched my life, and for those unforgettable experiences that have enriched me - I am grateful. After all, isn't it the journey that counts, not the destination?

To celebrate this momentous day, I took myself on a date to see a matinee of Knight and Day, indulged in a medium popcorn and iced mocha, and purchased a paperback novel at Barnes and Noble that shall remain on my bookshelf for a good year or two before I actually read it. The movie was okay (enjoyed the random nod to Hall & Oates). The iced mocha was a caloriefest I could've done without. And the mystery book seemed like it would make a great pageturner (Stephen King said so on the back cover). 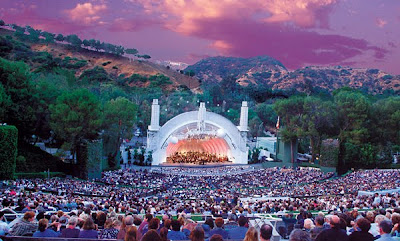 To make the special day complete, I ended up at the Hollywood Bowl for a Goldfrapp concert with a couple of friends. Going to the Bowl during the summer is a magical experience, and not just because of the copious amounts of doobage that's usually passed around the amphitheater. Attending a concert at the Bowl is a rite of passage for any Angeleno, and once you have a few shows under your belt, you know what to expect. You become a master at packing the perfect picnic basket (or in my case, a picnic Marc Jacobs shopping tote). You know which secret side streets are good for parking while avoiding the nightmarish stacked lots on Highland Avenue (it's worth the four-block hike). You know how to dress appropriately (a sweatshirt always comes in handy). And you know to keep an eye out for anyone you may know (besides the requisite celebs). Within the first three minutes of arriving at the hillside gates, I bumped into four acquaintances. Then there were four more I greeted while waiting in line for some cheese plates and sushi at the Patina-run concession stand. And let's not forget the five other friends who, after catching my Facebook status, texted me to say they were there as well.

Consider the Bowl a vacuum of familiar faces and good vibes. It's one of the few spots in this city where you can have a communal experience, physically brushing shoulders with people in the open air, which is rare to do when most of your day can be spent behind a steering wheel. And it's magical nights like this that can make a guy feel good about living in the City of Angels, about the choices he's made, the things he's accomplished.

The other night I happened to scroll through the hundreds of pics I have saved in my iPhoto library. This unplanned trip through memory lane got me all sentimental and made me realize (once again) how frickin' fast time flies. Eight years, seven bosses, six visits to San Francisco, five film festivals, four Vegas road trips, three apartments, two fender benders, and one dozen bicoastal comments later...here I am.

More surprises await. More pages are to be turned. More miles are to be driven. That said, I look forward to the next eight years. I mean, if I've made it this far, then any plans to move back east would be as likely as Miley Cyrus winning a Grammy.

In other words, I've only just begun.

Jenny said…
And what a great eight years of bloggage and late-night phone calls it's been!!