- March 03, 2011
There's a scene in the 1999 film Notting Hill in which Hugh Grant's character accepts an invitation to a posh hotel where he is to meet Anna Scott (Julia Roberts) at a press junket for her latest movie. When he arrives, however, he finds himself posing as a member of the press - a reporter from Horse & Hound - in order to gain access to the world's biggest celebrity. And shortly after he flirts with his potential love interest he must sit through one-on-one interviews with actors and patiently wait in hallways and lounges with journalists and reporters who sip on cups of coffee, scribble in little notebooks, and have deadlines to meet.

My second week as a renegade writer/blogger/taker-of-any-paying-gig found me in a similar situation. The editors of Bello Mag, who are also the founders of the stylish OhLaLaMag.com, called me up to see if I’d be available to interview Hollywood’s next Robert Pattinson, Alex Pettyfer (I Am Number Four), and his co-star, HSM sweetheart Vanessa Hudgens, from the upcoming Beauty-and-the-Beast-in-high-school flick Beastly. The press junket was to take place at the beautiful SLS Hotel on La Cienega, and I would be put on the list for a roundtable interview with the movie’s two stars and its director. Having just been there two days prior to interview the cast of Josh Radnor’s happythankyoumoreplease for HIH, I gladly accepted the invite for three reasons: 1. I was hoping to create some new opportunities and brush shoulders with other journalists with whom I could establish some connections. 2. It would offer more practice on the kind of e-reportage I’ve been doing for the past two years and 3. Press junket = free meal.

Getting to meet a couple of hot celebrities in the process...sure, it could be considered a bonus. 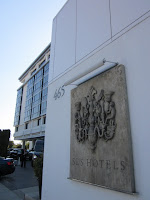 After attending several events like this, one can't help but pick up on a few things. First, the food ain’t so bad (let’s just get this out of the way now). The fancier the hotel, the tastier the menu. Case in point: The SLS, one of L.A.’s most prestigious (and new) hotels, has become somewhat of a hotspot due to its celeb clientele, gorgeous décor, and fantastic restaurant. And when a movie studio decides to use a hotel as its publicity headquarters for a certain period of time, the deal usually requires using the hotel’s caterer. The lunch provided during the Beastly junket was a smorgasbord of bite-sized paninis (the mini reuben was insanely good), a variety of salads, bottled soft drinks, and a mouth-watering dessert platter that could have been stolen from the set of a competition show on the Food Network. In other words, my stomach was overjoyed.

The variety of journalists who sit at a roundtable interview – usually six to eight people in total – range from veteran reporters with insightful queries to nerdy bloggers (ahem) and teenybopper writers who usually go for the safe and easy questions (“What’s your workout regimen like?” “What do you do to romance a girl?”). While chatting with Malin Ackerman (Watchmen, Couples Retreat) about her experiences on the set of happythankyoumoreplease and the themes of the film, I mentally consulted my What Would Oprah Ask journal and shot her this: “How do you define happiness?” Nobody saw that one coming, let me tell you.

By the way, if you’re wondering about those two other questions from above, Kate Mara (127 Hours, sister of Rooney) prefers an exercise called the Bar Method, and Alex Pettyfer buys his lady friends boxes of chocolates.

And then there's the free stuff the movie studio likes to occasionally shove into the arms of journalists, usually crappy souvenirs and products the film's marketing team has spent months working to produce. On this sunny Thursday in Beverly Hills I was treated to the soundtrack CD, the paperback novel (did I mention it's an adaptation?), a box of Jujyfruits (apparently one of the characters is a big junkie), and both a Wii and Nintendo DS game based on the film. If you have a birthday coming up and you love videogames, please know that I picked up a copy just for you.

For the Beastly junket I shared a room with an eclectic group of individuals. We were one of three roundtables on the sixth floor. Both actors and the director took turns entering each room to face a bombardment of questions from people who either didn’t give a shit about the movie being promoted or were faintly interested in getting soundbites from a pair of twentysomethings who earned paychecks exponentially larger than all of us combined. Since I had been put on this assignment two hours before the scheduled check-in I was the only one in the room who hadn’t seen the film. I didn’t attend any of the press screenings that were held the week before. What could I possibly ask? How could I play along? Could I bluff my way through the entire interview? I quickly racked my brain: it's a high school movie, so why not ask Alex and Vanessa about their own high school experiences and see how they might have applied them to the roles they played?

I had plenty of time to think of other questions because of the 45-minute delay we had to endure (I'm not at liberty to say which rumored-to-be prima donna was the cause of this). Some of my press constituents grew restless as the minutes ticked by. Once in a while a publicist would pop in to apologize for the late start. One middle-aged woman who had been doodling on her press packet got up to get a cup of coffee in the hospitality suite. The 41-year-old moderator who had let it slip that he could recite the lyrics to The Little Mermaid's "Part of Your World" (the complaints/talents of a new father) started spilling some humorous anecdotes which involved his impressive impersonation of Nicolas Cage. The two schmoes next to him swapped business cards and went over their hectic schedules for the rest of the week ("Dude, I've got to transcribe three interviews and go to a screening of that Topher Grace flick I so don't want to go to"). To my right, a young staffer from Tiger Beat quickly went through emails on her smartphone while the blogger sitting next to her did the same. And the Asian chick sitting across from me politely laughed at the moderator's stories while the woman at the far end stared into space and attempted to adjust her bra. Clearly she was of an age that did not suit the tank top she was wearing.

I'm sure Davids Mamet and Ives could find a juicy, character-fueled one-act play hidden within these walls.

Finally we were graced with the presence of Ms. Hudgens and Mr. Pettyfer. Digital recorders slid across the table. Notebooks were flipped open. The first question was asked. It all happened like clockwork.

Unlike some of my counterparts, I didn't have an office I needed to rush back to once it was over. The rest of the day was ripe for the taking, and I didn't want it to slip away. I had errands to run, entries to write, correspondences to keep up. I hope I get to go back to the SLS Hotel. I could sit in that lobby all day and curl up with a book by the firepit. And they have nice disposable hand towels in the bathrooms. (and so what if I pilfered a couple to use at home?)

Now, if you'll excuse me, I have to start prepping for the next junket with Clive Owen and Catherine Keener, this time at the Four Seasons...

I wonder what they'll serve for dessert.