The English language is full of words that are often forgotten thanks to the increasing dominance (and acceptance) of slang in our vocabulary and the inevitable evolution of overall wordage.

Here are a few terms I'd like to reintroduce to the lexicon. True, some are old-school and may sound a tad proper, but I'm all for making the old new again.

1. Henceforth - It's adorably British-sounding and carries an air of sophistication.

2. Dagnabbit - It's adorably retro (thank you, Elmer Fudd). To be ironically used in place of "Goddammit." So, the next time someone cuts you off on the freeway or the DVR cuts off the last minute of Breaking Bad, let it out. And then have a chuckle at how cute you sound.

3. Frivolity - Just another way to describe some of the things I obsess over.

5. Brabble - It means "to quarrel about trifles; esp. to quarrel noisily, brawl, squabble." Like, what those loud broads do on any given installment of Real Housewives. 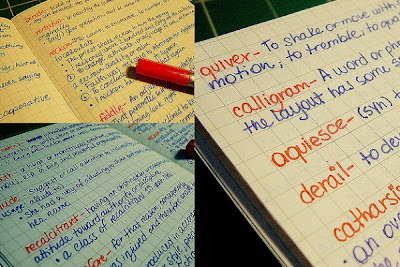 6. Thus - It helps you sound more polite when kicking someone out of your house, whether it's an annoying guest...or a one-night stand: "It is late, and thus you must go."

7. Hoddypeak - Used to describe someone who's a blockhead, a simpleton, or a fool. And right now I can think of several people who easily fit that title.

8. Brannigan - This North American slice of slang was once used to describe the act of binge drinking. Too bad I didn't know of its existence before my recent holiday trip to Palm Springs, because that was a total brannigan.

9. Cul-de-sac - Simply because I would love to have Knots Landing get rebooted on TV -- hey, it worked for Dallas -- and have this return to the nation's lexicon.

10. Metrosexual - I'd bring this word back, but with a different meaning: a way to describe someone who likes to have sex while riding public transportation.