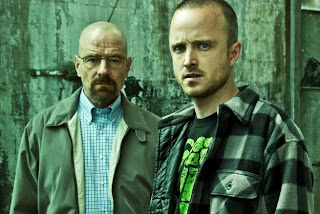 After months of listening to friends shout from the rooftops about how Breaking Bad is one of the best television dramas in history, I finally hunkered down and partook in some binge viewing, courtesy of Netflix (and one borrowed DVD boxed set). I was determined to catch up on all 46 episodes before the series' fifth and final season premiered (which happens tonight on AMC).

Little did I know I would become just as addicted as some of the meth-heads portrayed in this sinister saga. Only instead of those crystallized blue crystals, I'd be hooked on the meticulous details and the intricate storytelling skills of series creator Vince Gilligan.

First, let's address why this show deserves all the praise it has received thus far. Never has a show (in recent memory at least) functioned as a carefully constructed chronicle of one character. For the uninitiated, Walter White (well deserved Emmy winner Bryan Cranston) is a mild-mannered high school chemistry teacher whose life expectancy shortens after being diagnosed with lung cancer. Desperate to make sure his wife, teenage son, and baby daughter are cared for when he's gone, Walt teams up with a former student, drug addict Jesse (the magnetic Aaron Paul), to create a homemade meth lab, sell some grade-A product, and reap the financial benefits. One wrinkle: Walt's brother-in-law, Hank, happens to be the head of the DEA (cue the close, suspenseful brushes with the law).

Much like Showtime's Dexter, Walter White leads a double life. The seemingly boring and nerdish family man is also a player in a growing drug trafficking scheme. He becomes a criminal you root for; you can understand where he's coming from, why he does what he does (more on that later). But whereas the show about "America's favorite serial killer" slightly leans more on the procedural side, BB is a straight-up serial. Miss one episode, and you'll miss why a small, plastic eyeball from a teddy bear carries a heavy significance from one season to the next.

Which brings us to that meticulous detail to story. Most episodes, particularly those from the second season, open with abstract teasers. The producers and writers implant clever little Easter eggs for the sharpest viewers to find, each one a vital piece to a large and twisted puzzle. Much like a Coen Brothers crime saga, Breaking Bad is also infused at times with dark humor. And much like a Tarantino epic, there's enough thick, hold-your-breath tension to leave you gasping for air by the end of each episode (the minimal soundtrack also helps maintain that dread-filled tone). Therefore, the seemingly mundane suburbs of Albuquerque, New Mexico become a sunny stage for the juxtaposing seediness that lurks underneath those Spanish-tiled roofs. The show's directing team also manages to incorporate breathtaking vista shots of the Southwestern landscape with a cinematic polish rarely seen anymore in...y'know, cinema.

At its core, however, Breaking Bad ultimately works as a fantasy for every American who's ever felt financially cornered and trapped between that proverbial rock and a hard place. Who wouldn't love having a stash of cash hidden underneath the floorboards? Who wouldn't love making millions, all in a month's work? Maybe it's no coincidence that the show debuted at the start of 2008, a time when the country's economy started to crash, burn, and leave most people clinging to the remnants of whatever fortunes they had. Or maybe it was just a matter of perfect timing, art viscerally imitating life with plenty of resonance. Vince Gilligan's drama is a morality play that asks "What would you do?" and thrusts everyday, relatable, law-abiding citizens into a world of danger, duplicity, and death.

We sympathize with Walter White because he's one of us, a Joe Schmo who made a decision to protect his loved ones, and now he'll do whatever it takes to keep it that way (by season 4, he appeared to have fully embraced his dark side). As for Walter's wife, Skyler (Anna Gunn), it took three seasons for her to reluctantly become a part of her husband's secret world (as an accountant, she's quite the money launderer). Why three? Because in the realistic universe of Breaking Bad, that's how they roll. Pacing is everything here. No plot point is ever neatly wrapped up and discarded. Every action has its consequences, and every consequence has its chain reaction.

Every actor in this well-cast ensemble is given a brilliant character arc, and watching each one play his or her part in this deepening story makes for engrossing television. Walt's a messed-up paternal figure for Jesse! Hank's wife (Skyler's sister) Marie has kleptomania issues! Skyler uses her hot boss to project her insecurities! Rarely do character and story blend and complement each other so effortlessly in a TV show like this one.

TV historians, have fun placing this one in your books.