My 12 Songs of Christmas 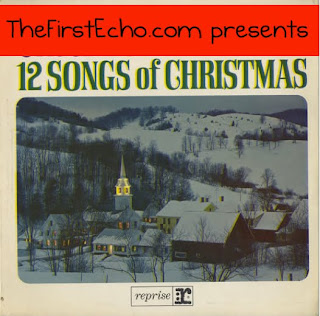 Over the past couple of years, it has come to my attention that listening to Christmas songs is a great way to relieve stress and brighten any downtrodden spirits because they tend to provoke reminiscences of holidays past. They also make me long for those days when my heart skipped a beat at the sight of big, wrapped package -- not only from Santa, but from any one of my many relatives.

Holiday songs not only bring good cheer to any party with mistletoe, they simply exist for the sake of nostalgia. Therefore...

I've collected a dozen yuletide tunes that have a special place in my heart. Behind each one is a particular memory of mine, either from the first time I heard it or from a random moment from my past. Who's ready to hop on a sleigh and take a ride with me?

1. "All Alone On Christmas" by Darlene Love (1992) -- Hard to believe it's been 20 years since I first heard this jingle, easily the best part of Home Alone 2: Lost in New York (besides Tim Curry's scenery chewing). I remember blaring this in my father's Camry while waiting in the parking lot of a Radio Shack somewhere in Long Island (my dad was attempting to return a "defective" TV antenna he most likely broke himself):


2. "All I Want For Christmas Is You" by Mariah Carey (1994) -- I was a freshman in high school when Mimi dropped her first holiday album and delivered this yuletide treat that would go on to become the most popular modern-day Christmas single. And who knew, 17 years later, she'd tarnish it all by remixing it with a certain tweenybopper named Justin Bieber.

3. "Jingle Bells" by Barbra Streisand (1967) -- My mother made it a tradition to play Babs's A Christmas Album -- on vinyl -- every Christmas morning when I was little. Whenever I hear those rapid-fire lyrics, visions of clove-infused hams and gift-wrapped boxes dance in my head. That reminds me: I'll have to check matinee showtimes for The Guilt Trip when I go home for the holiday -- you know my mom is just dying to see it.

5. "Christmas Eve/Sarajevo 12/24 (Instrumental)" by Trans-Siberian Orchestra (1996) -- Soaring guitars. Pounding drums. It sounds like something that would be featured in an over-the-top trailer for a holiday-themed action flick starring Arnold Schwarzenegger. Santa Claus is coming to town -- with hundreds of bullets and hand grenades.

6. "Last Christmas" by Wham! (1984) -- Nothing says Christmas like watching a bunch of Europeans frolic and play at a mountaintop chalet while a then-closeted homosexual uses a silver garland boa to flirt with an unsuspecting single white female. And yes, I own four of the many remakes of this song, courtesy of Jimmy Eat World, Cascada, Savage Garden and the cast of Glee.

7. "The Christmas Song (Thunderpuss/Holiday Mix)" by Christina Aguilera (2000) -- Long before she was mentoring wannabes as a judge on NBC's The Voice, Xtina pumped out a holiday disc the year after her debut album and scored with this classic, remixed for all the club-hopping boys and girls of the new millennium...and played several times on the road home from Boston during my junior year of college. Sounds quaintly vintage compared to the high-energy EDM that's now dominating Top 40 radio:

8. "Merry Christmas, Happy Holidays" by NSync (1998) -- Since we're on the subject of late-90s teen pop, why not include this happy-go-lucky track from the splendiferous year that was 1998? Relive its cheesy, low-budget glory -- Gary Coleman cameo and all -- HERE.

9. "Rockin' Around The Christmas Tree" by Brenda Lee (1958) -- 40 years before the aforementioned boy band took a sleigh ride on MTV, a 13-year-old made Christmas music history. The oldest track on this playlist is also the most timeless.

10. "The Night Before Christmas" by Amy Grant (1992) -- Carly Simon may have sung (and written) the original, but it's this rendition that takes me back to the time when a little 12-year-old boy from New Rochelle, New York was obsessed with a certain Christian-singer-turned-pop-star and bought his first Christmas album...on a cassette tape.

11. "My Grown-Up Christmas List" by Monica (2000) -- Composed by David Foster back in the 90s, this is one of the earliest remakes, and it gets me every time. "No more lives torn apart, that wars would never start, that time would heal all hearts..." If you're having a blue Christmas, grab some Kleenex, sit on the floor of your bedroom, and let it all out.

12. "X-Mas (Let's Do It Again)" by Alphabeat (2012) -- Naturally, I had to include a brand-spankin' new favorite. This merry original comes to us courtesy of my favorite band from Denmark. Everything about it is wonderful, from its Wham-like production to its carefree vocals. I dare you to not crack a smile after pressing play. A new classic in the making?