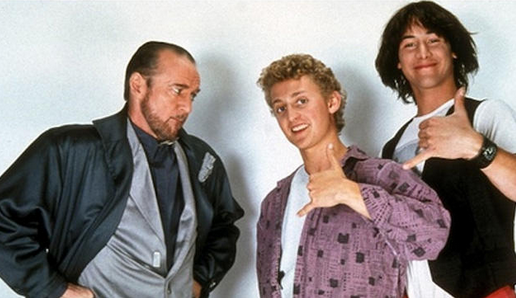 On a chilly day in the late 80s I ventured out to Movieland on Central Park Avenue in Yonkers, New York with my father to witness two dim-witted high school seniors from Encino, California have a fateful encounter with George Carlin and his time-traveling phone booth in the parking lot of a Circle K.

Bill and Ted's Excellent Adventure was released on February 17, 1989 and became a surprise hit considering it was shot two years prior and went through some drama-filled distributor swapping. It was also one of the first films I ever owned on VHS cassette, a hand-me-down from an uncle who had gotten in way over his head with a Columbia House membership. And since I owned a copy of the movie, I watched it numerous times, learning how to say "shit" in French (thanks to Napoleon's bowling snafu) and appreciate a good Iron Maiden pun.

Fun fact: Joan of Arc was played by Jane Wiedlin, the same Jane Wiedlin who appeared as the Singing Telegram in Clue four years prior. It took me a few viewings to realize this as a 10-year-old.

And now that the script of a third film has been written, I can't figure out why a studio hasn't offered to back up this excellent slice of nostalgia. Sure, Keanu bombed with 47 Ronin, but he needs to bounce back at the box office, and this will surely reestablish his marquee status. And I'm sure Alex Winter, who's aged quite well, could use a trip down memory lane with his fellow Wyld Stallyn.

Hell, if Hollywood can pump out three Harold & Kumars, then it can certainly squeeze out a final Bill & Ted chapter.

Unknown said…
Want to find out what George carlin was really like or how good a kisser keanu is? Then you will love our excellent adventure with Diane Franklin then... At http://retroladyland.blogspot.co.uk/2014/03/an-excellent-adventure-with-diane.html
6:01 AM