Eulogy for My Grandmother 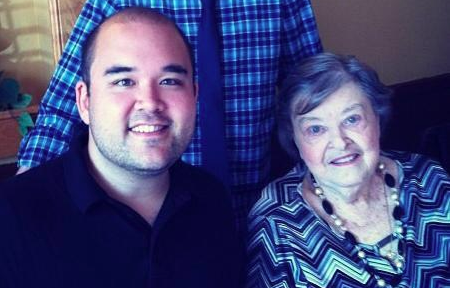 The death of a grandparent is something that always lingered over my head like a gray cloud threatening rain. The older I got, the darker it got. Would I be ready for the downpour? Was I prepared to deal with the sudden change? Of course I did everything to ignore the looming possibility, but as the years wore on -- and as certain health scares popped up here and there -- I felt that prickly sensation, just like when the hairs on the back of your neck stand up before a storm.

Ever since elementary school, I was aware of this possibility because, every so often, a classmate of mine would be absent for a few days. And then I, along with the rest of my class, would learn of the reason why little Jenny or Timmy missed several homework assignments: one of their grandparents had "passed away, and she needs to be with her family right now."

This happened throughout high school, college, and even during my years as a post-grad twentysomething adjusting to life in a new city on the other side of the country. I'd hear about the passing of a grandparent, offer my condolences, and silently thank the Universe for keeping someone on this earth who could still call me her grandson.

But I knew that, someday, it would be my turn to receive the sad news. And that day was January 11, 2015. Just three weeks after her 93rd birthday, my grandmother, Grace Riehm of New Rochelle, New York, left this life, this world, and my family.

If you think about it, this one person was responsible for the existence of so many. If you think about it, one woman was the reason why a group of people is able to gather together for a holiday, for a birthday, for every little, seemingly insignificant moment that tends to be taken for granted. That's 7 children, 12 grandchildren, and 7 great-grandchildren. Not to mention countless in-laws and friends of the family, past and present. If you do take the time to think about it, take from it whatever you want.

Since I had been the baby of my family for the good part of a decade (most of the 80s), I had the privilege of spending a memorable amount of time with my grandmother. And while everyone in my family has their own memories of Grace Riehm, "Mommy," Grandma, or "Big Grandma," I have a lot of detailed recollections of my own simmering in my head -- enough to fill a book, my mother says. Here are a few of many:

Playing with my Hot Wheels and Matchbox cars on her living room floor after school and soaking up the soapy developments on General Hospital while it played in the background...

Driving over the George Washington Bridge in her trusty Ford Escort, getting lost somewhere in New Jersey while searching for a park that probably didn't exist, and ending up on the banks of the Hudson River sipping some apple juice on a bench...

Witnessing her first heart attack at the age of 5 while stopping at the Centre Avenue Deli for a cold drink on a hot summer day. All I remember was a neighbor walking me the three blocks to the New Rochelle Public Library where my aunt Carol worked, and sitting behind the circulation desk, waiting for someone to take me home...

Subsequently visiting her in the hospital, my first experience inside the white corridors of New Rochelle General...

Watching me go down a giant slide and land in a tub of red JELL-O for charity after making a donation at an event in the Cross County Square Mall (I made a complete mess of my Levi's)...

A random sleepover or two...

Teasing her by calling her a "Golden Girl" because she always had to do her hair and put on make-up every time we took the 1-block walk to Meateria, the neighborhood market on Main Street.

Taking a trip to my aunt and uncle's cabin with my cousin Andy and sleeping with the blankets over our heads after trying to shoo out a renegade bat that had made its way into the cabin (We had seen enough vampire movies at that point to take the necessary precautions)...

Borrowing her car to go to school shortly after I got my drivers license...

Going on a road trip to Vegas shortly after I moved to LA and laughing over the fact that Kelly Clarkson's "A Moment Like This" followed us wherever we went -- every casino and buffet we visited played the song repeatedly. There was no escaping the newly crowned American Idol.

And now I have my final memory of my grandmother firmly ingrained in my mind: three days after Christmas, swinging by her apartment on the way to the airport to catch my flight back to LA (just like I always did for the past 12 years), her sitting on the edge of her bed, half-eaten toast left on a little tray, the volume of her TV turned up and tuned in to an episode of Hot in Cleveland; all I could glance was Valerie Bertinelli standing in front of an untrimmed Christmas tree, delivering a catty punchline.

It was just like any other goodbye. A hug, a kiss, and an obligatory "take care of yourself."

But it was the last one. And I'm very grateful that I was given that chance to experience it.

Here's to Grandma. Here's to "Mommy."

I first stumbled upon your blog because of a YouTube mini-documentary I discovered -- you were on the hunt for the elusive Christopher Pike. He's my favorite author; I even have one of his book covers -- Season of Passage -- tattooed on my arm.

I've been meaning to write you for a while, to: A) ask if you ever did find Mr. Pike/Mr. Kevin McFadden, and B) to tell you how much I appreciate your blog. You are eloquent, smart, and pop culture crazy; plus, you seem to host a deep well of compassion that runs through your words.

But now I have a C) to write you about, and the most important reason yet. I wanted to extend my heartfelt thoughts around the loss of your grandmother. This is a beautiful eulogy in her honor; my heart is touched. I have my own relationships with my grandparents, though they've long transitioned from this earth. Your grandma would be so touched -- she *is* so touched; her spirit is still part of you.

All my best to you as you navigate your healing....