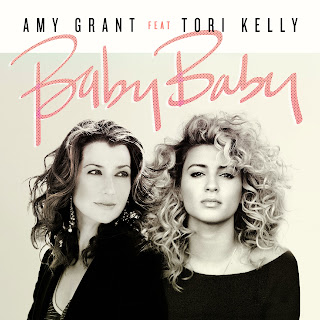 File this under: Damn I'm Old.

Amy Grant's 1991 megahit "Baby Baby," the chart-topping gem that successfully transitioned her from Christian folk singer to bonafide pop star (for a good two or three years), turned 25 this week.

As I've reflected and written before, I first heard this song while sitting in the passenger seat of my mom's Pontiac 6000-LE and cruising up I-95 in New York. It sparked my first legit pop star obsession. Throughout most of the early 90s, Heart in Motion, the album from which this single sprang, was on full rotation in the car, in my room, and on my Walkman.

And now, to celebrate this silver anniversary, we have a sparkling new rendition of this pop gem, courtesy of rising star Tori Kelly. The credit may state "featuring," but Tori is all over this, overlapping with Amy's vocals from the original recording.

And catch some behind-the-scenes action on the making of this song HERE.