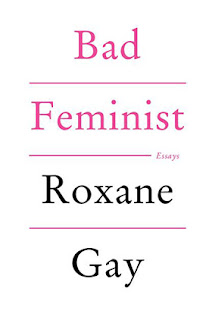 To say I'm infatuated with this book would be an understatement. (A little late to the party considering this came out in 2014.)

Writer, author, and all-American literary badass Roxane Gay is everything I strive to be: a pop culture critic who has a lot to say about our current state of affairs as well as her obsession with the trivial trials and tribulations within YA series like Sweet Valley High.

She has a f**kton of insightful things to say about gender, sexuality, race, religion, friendships...and the wonders of the Real Housewives franchise and Girls.

It doesn't matter if you have a penis or a vagina. This book speaks to everyone. Whatever gender you identify with, her collection of essays will open your mind and truly allow yourself to see things from a perspective you probably never considered before.

Below is a short piece of Roxane, introducing the book, but I also suggest checking out on YouTube some of her lengthier discussions on panels at her many speaking engagements across the country.