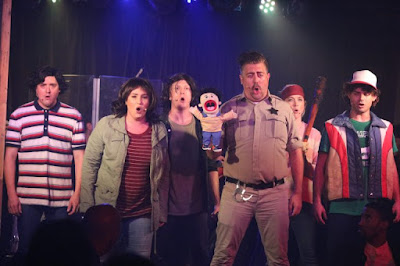 The folks behind L.A.’s Unauthorized Musical Parody Of… series is at it again, this time with a spoof of the hit supernatural drama Stranger Things.

Having already covered parodies of popular big-screen titles like Home Alone, Scream, Jurassic Park, and Clueless, this appears to be the troupe’s first time dedicating a production to a TV series. And like its pop-cultural predecessors, it’s a rockin’ good time.

Written by executive producer Kate Pazakis and directed by Nathan Moore, who last appeared as Rhodes in UMPO: Bridesmaids, this pop-cabaret show (at Rockwell Table & Stage) brings to life the first season of the Duffer Brothers’ critically-acclaimed Netflix drama that takes place in the fictional town of Hawkins, Indiana during the 80s. And you know what that means: a song list chock-full of Reagan-era pop-rock is inevitable.
Donna Summer’s “She Works Hard for the Money” becomes an anthem for frantic mom Joyce (powerhouse Emma Hunton of Freeform’s Good Trouble), who searches for her missing son Will (played to hilarious effect by…a felt puppet). Diana Ross’s “Upside Down” gets a wicked rap break when Dustin, Mike, Lucas, and Eleven enter the parallel universe of the same name. And Cyndi Lauper’s “Time After Time” makes an appearance as a duet between teenage good girl Nancy (Pitch Perfect‘s Kelley Jakle) and ill-fated fan-favorite Barb (Tony winner Marissa Jaret Winokur). And speaking of Barb, this spoof benefits from an inventive twist: a Choose-Your-Own-Adventure feature allows members of the audience to roll a dice and determine the fate of certain characters. (According to our show, Barb lives!) 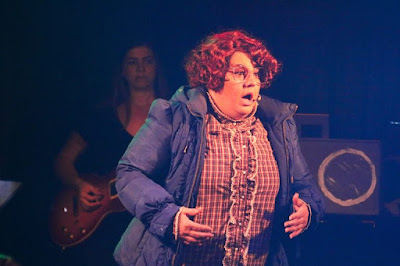 The show’s supernaturally talented cast also includes Eric Petersen (Kirstie, School of Rock on Broadway) as Sheriff Hopper and Garrett Clayton (King Cobra, NBC’s Hairspray Live!) who pulls double duty as Nancy’s boyfriend Steve and the lovable-but-goofy Dustin. Look out for his awesome rendition of Europe’s “The Final Countdown” in Act Two. And then there’s Damon Gravina as Mike and Lana McKissack as the telekinetic Eleven: the pair stops the show with a kickass cover of Radiohead’s “Creep.”

Says Pazakis, about the Unauthorized Musical Parody Of… series: “We always try and merge movies and musical theatre, and love revisiting and retooling popular films and series for the live audience…Our live band and slew of hit pop songs develop this cult classic story in a way that UMPO Rockwell audiences have come to expect – a night of great talent, entertainment and laughter!”

By popular demand, the run for UMPO: Stranger Things has been extended through Sunday, December 2. Get your tickets here.