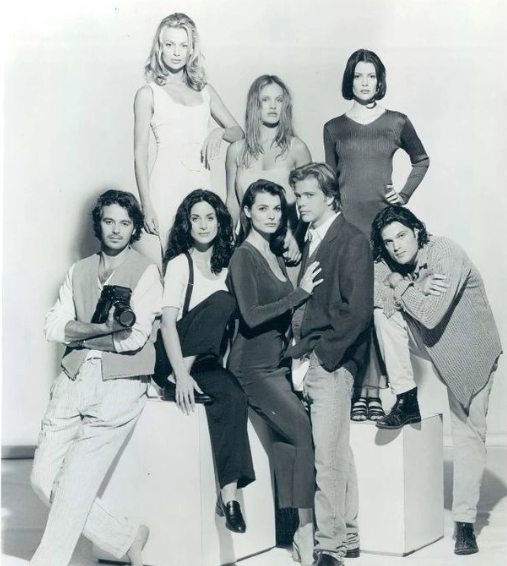 In the early 90s, as anyone familiar with the oeuvre of uber-producer Aaron Spelling knows, the successful Beverly Hills, 90210 begat the successful Melrose Place, which then begat the gloriously campy trainwreck that was Models Inc.

"If you missed the series premiere of Models Inc. you missed a night of temptation, seduction, and murder," boasted the TV Guide ad for the drama's second episode, which aired shortly after the 4th of July holiday weekend of 1994. How do I remember? I still have in my possession the magazine clipping, straight outta my scrapbook of primetime soaps, of course.

A rather limp murder mystery kicked things off when been-around-the-block supermodel Teri Spencer was pushed off the balcony of a Los Angeles high-rise. Whodunit? Who cared? But if you must know: it was the agency's receptionist...with the candlestick...in the...nevermind.

As a die-hard Melrose fan, I consumed this forgettable piece of Clinton-era crap with relish. I read every entertainment article that publicized the spinoff's anticipated debut on Fox twenty-five years ago. And while other 14-year-olds were shooting hoops down the street, I was obsessing over catty lines of dialogue and studying cheesy plot devices for the development of my own primetime soaps I had kept handwritten in small spiral notebooks (Titles included: Shadow Hills, Miami Heat, and Sutton Heights).


The titular modeling agency in the show was run by Hilary Michaels (Dallas alum Linda Gray), mother of Melrose's main villainess, Amanda Woodward. According to Ken Tucker's review of Models Inc. in Entertainment Weekly, Farrah Fawcett was once considered for the role of Hilary, and naturally I would have killed to be a fly on the wall in the room where that casting decision had been made. As for the rest of the cast, they were unknowns, and executive-producer Aaron Spelling promised "a great deal of backbiting" on the sudser.

Hilary's bevy of babes was, by 2019 standards, as diverse as a sorority at White Girl University. There was the newbie, the waif, the bitch, and the has-been -- at age 27. Then there was dead Teri's lookalike, Monique, played by the same actress (Stephanie Romanov), appearing out of nowhere and throwing all the characters for a loop. Monique fell in love with wealthy nightclub owner and widower Adam Louder, played by 90s actor James Wilder. Fun fact: Not too long before appearing on Models, Wilder also played evil Reed on Melrose Place, getting Jo (Daphne Zuniga) pregnant before she shot him in self-defense while being held hostage on his boat. Which begs the question: If Models existed in the Melrose universe, could Adam have been related to Reed? Or did Reed fake his death and reappear with this new identity? But why stay in the same city? 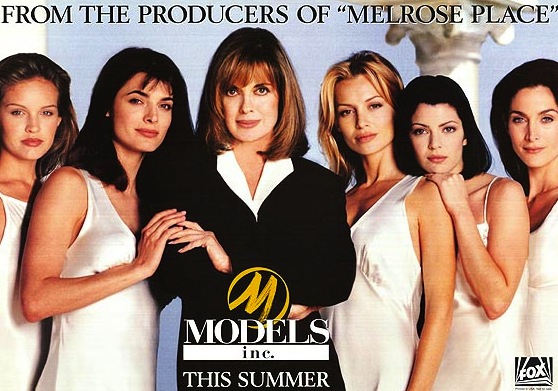 After five months, and nearly halfway through an enormous 30-episode order, producers were not satisfied with Models Inc.'s Nielsen ratings. Co-creator Charles Pratt once said, "I'm willing to try anything to keep this show on the air." A new direction in the writing ditched implausible storylines and promised "more romance, more modeling, and more personal traumas." Brian Gaskill, who played Hilary's lame son and dated doe-eyed Sarah (Cassidy Rae), was written off, and Haitian-American actress Garcelle Beauvais was hired to play the alluring Cynthia because, well... #ModelsSoWhite.

But the biggest addition was Emma Samms, another Aaron Spelling vet, brought in as the sociopathic Grayson Louder, returning from the grave to win back ex-husband Adam. With Fox promoting her as the Heather Locklear of Models Inc., Samms told Entertainment Weekly back in 1994, "I will do the best I can, but I can't concern myself with whatever expectations there are."

And she did do her best; the last batch of episodes demonstrated just that. After all, what's a desperate British broad with ample cleavage to do when she fails to rewrap her legs around the man who fathered her child? Hire a hitman (The X-Files's Mitch Pileggi!) to snuff him out along with his new bride...at their wedding. What turned out to be the series finale ended with a cliffhanger in which said hitman took his shot, leaving viewers -- and one frustrated boy in New Rochelle, New York -- wondering who received the bullet. Luckily, when E! reran the series in the fall of 1995, the broadcast included several scenes that tied up some of those loose ends: Grayson, in an ironic twist, got shot, and Hilary, after probably realizing her models were way too involved in all this crazy shit, shut down the agency for good.

However, if there was anything this piece of primetime trash was good for, it was delivering Carrie-Anne Moss to audiences. Even though her character, Teri's older sister Carrie, was last seen being sold in sex slavery "somewhere in Central America" in the final episode, all of us fans were happy to see actress star in hits like 1999's The Matrix and 2000's Memento.

And who could forget that awesomely 90s opening theme song? I didn't. I have it saved as an mp3 in my iTunes library, filed in a playlist called "Primetime Soap Themes."

In other news, I'm still single.