That Time I Worked With Shirtless Werewolves (and a Future Bravolebrity) 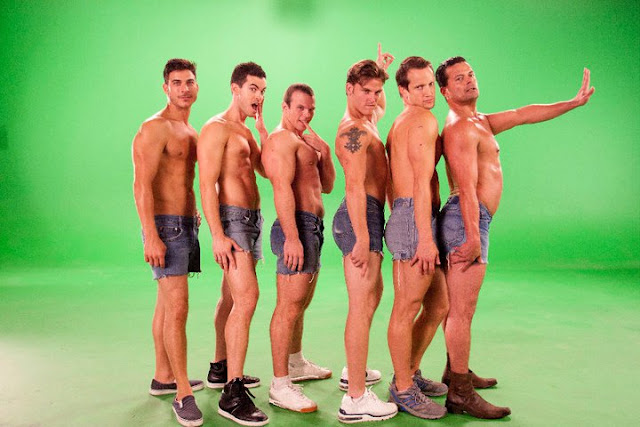 In the fall of 2010 I had the insane (and exhausting) pleasure of working with my friend, Michael Medico, on a project for 20th Century Fox Home Entertainment.

Our sixth collaboration involved producing a flash mob-like experience and an accompanying digital video that promoted the DVD/Blu-ray release of Vampires Suck, the comedy spoofing the Twilight franchise as well as other pop culture trends at the time.

The project involved a day of rehearsal at a studio in the sketchy warehouse district of Los Angeles, followed by a day of shooting these performances at five locations throughout the city. The dance number was a recreation of one of the movie's scenes in which a group of shirtless werewolves (in human form) break out into a choreographed routine set to "It's Raining Men" by The Weather Girls (naturally).

The first performance took place on a Sunday morning at San Marino's Colonial Kitchen, a quaint suburban diner where we gave the post-church crowd a serving of eye candy to go with their pancakes and waffles.

Our guerrilla crew -- nine of us, plus our six dancers -- was a nervous wreck. We didn't know how this kind of crowd would react. We had already received permission from the restaurant's owner (through a connection we had) to interrupt people's brunches with the performance. Some of us were already planted in seats, posing as customers, when the music started. Our six guys walked in wearing their tearaway suits...and began. 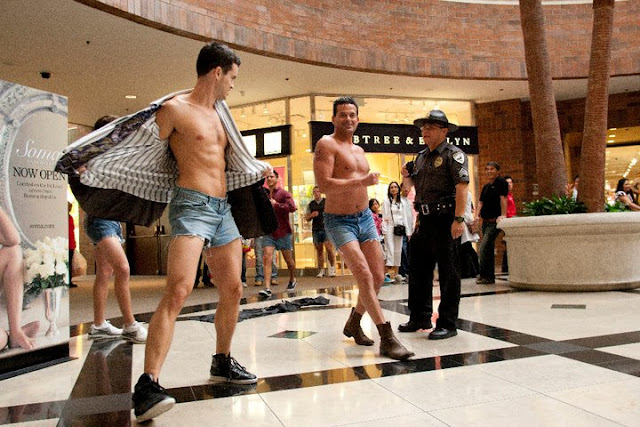 The space inside the dining room wasn't ideal, but it unfolded as planned. They pumped, they gyrated, they flexed -- all of it ending in a sweaty chorus line. A lucky group of senior citizens even had front row seats to the whole thing (you can catch their reactions in the behind-the-scenes video below).

Three of our other locations worked out just as well. A plaza in downtown LA drew a small crowd. The students at USC were treated to the strip show in the middle of campus. And even the tourists on Hollywood Boulevard, in front of the historic Chinese Theater, got a kick out seeing six grown men show off their abs in the middle of an October afternoon. After every performance, they would grab their clothes and run off, jumping into our rented production van that would take them away to the next location.

However, the performance inside the Glendale Galleria was another story.

Going in, we knew pulling off this ambush performance would be risky. Why? Because it was the one location for which we had no permit. We had scoped out the mall earlier and picked a place (outside Crabtree & Evelyn, near an exit to the parking garage) where our dancers would do their thing. Everyone got into their positions. I rolled out my mobile speaker and started to record b-roll on my small Flip camera. Someone pressed play on the song, which immediately caught the attention of the nearest security officer who tried to diffuse the scene. Our dancers, troopers that they were, continued. By the time the clothes came off, shoppers started hollering and cheering, and this only prompted Mr. Security to call for backup. (See above photo.)

By the time the song ended, more guards had shown up, and everyone scattered to the wind. Six shirtless men darted off, fleeing to the parking garage. However, there was no van to pick them up. Our escape route was not thoroughly planned out, especially for a situation like this. I followed four of the guys as they shot up a staircase, security guards yelling behind us, shouting for us to stop. My heart was a lump in my throat, adrenaline coursing through my veins like the mighty Colorado River. Oh my God, I thought. This is how we all go to jail.


Security trapped us like rats in that garage stairwell. So, not knowing where the rest of our crew went, not knowing how this would escalate, we surrendered. And as producer of this whole spectacle, I put myself front and center and offered to explain who we were and why we were there. From my messenger bag I pulled out a copy of a production agreement to show the officers that we were all hired by a major movie studio to pull off this promotional stunt. I apologized profusely, acknowledging our neglect in obtaining a permit for this surprise performance. The head officer then asked to see my ID and wrote down my contact information as well as our contact at 20th Century Fox. Long story short (too late), and since no one had been hurt, we were let go. My body was still shaking long after we drove out of that garage.

I never heard from that security officer, yet to this day, I wonder if I'd ever be able to show my face inside the Glendale Galleria. And needless to say, we never used that mall footage in the finished video.

Overall, the entire experience was an exercise in stamina, spontaneous teamwork and rapid-fire troubleshooting. By the end of the weekend, we were all drained -- physically and emotionally. Would I ever do something like that again? For a nice paycheck, you bet your ass I would. As most production work in LA goes, I made a few new friends and contacts. However, this would turn out to be my last collaboration with Michael; he would go on to direct bigger and better things, and I would go on to pursue other endeavors.

The experience would also turn out to be part of the origin story of a well-known reality TV star.

If you look closely at the top photo (on the left), as well as in the above video, you'll catch a glimpse of a certain someone -- before he was famous. Yes, that's Mr. Jax Taylor of Bravo's Vanderpump Rules. He was a young 30-year-old who was...let's say, rhythmically-challenged. We had kept in touch after that whirlwind weekend, becoming friends on Facebook where he would eventually request to not be tagged in any of the photos taken from the shoot. I assumed he was sensitive about his impending career and wanted to maintain a certain image.

I guess being on a show about self-involved, promiscuous servers at a trendy restaurant would take care of that image two years later. 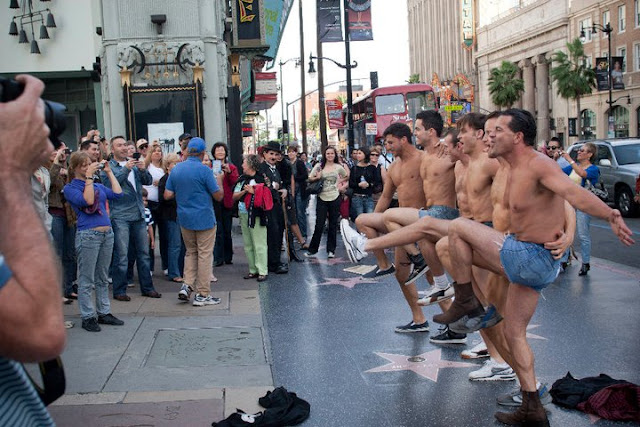