'Everything's Gonna Be Okay': The First Great TV Show of 2020 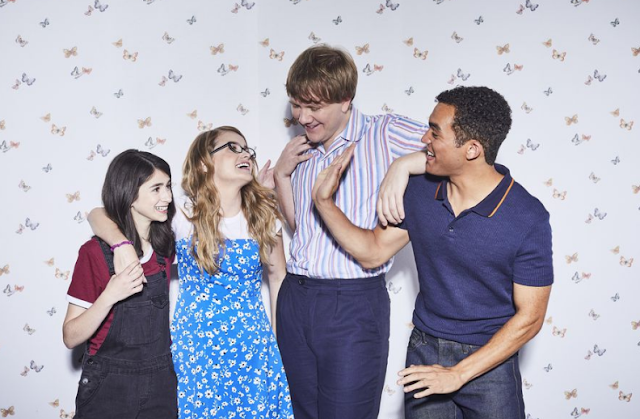 Freeform, the network formerly known as ABC Family, which was the network formerly known as Fox Family (for those of you born before 2000), has gradually rebranded itself as an aspirational (and more importantly, inclusive) entertainment entity for Gen Z ever since coming out in 2016 with a whole new look and name. Back then, it was announced that it would establish a focus on "becomers," a group ABC Family President Tom Ascheim had tried to describe by explaining, "The most important question that young people ask themselves as they're going from high school to their thirties is, 'Who am I becoming?' So we call the life stage 'becoming' and the people going through it Becomers."

And therein lies Everything's Gonna Be Okay, which effortlessly slides into those network brand pillars by centering on a group of very likable and relatable "Becomers." EGBOK is a tender, funny, and unapologetically awkward comedy, the likes of which you would get if Pen15, Please Like Me (one of the best shows of the 2010s), and Catastrophe were to hook up in a throuple. Maybe that's because it's from executive producers of the latter two critically-acclaimed shows.


In fact, EGBOK fills in nicely as a thematic/spiritual sequel to Please Like Me, also created by star Josh Thomas. Here he plays Nicholas, an impish twentysomething from Australia whose visit to his biological American widower dad ends on a somber note: Dad has cancer and doesn't have long to live, and Nicholas ends up becoming the legal guardian of his two teenage half-sisters, autistic Matilda (Kayla Cromer), who's eager to start college and find romance with a kind jock, and awkward Genevieve (Maeve Press), a 14-year-old who's adjusting to the nerve-wracking politics of high school. And to make things even more confusing, Nicholas has just started a relationship with a cute and very understanding guy named Alex (Adam Faison, last seen in Hulu's slasher flick Midnight Kiss).

The first few episodes juggle a number of issues and scenes you'd rarely see in a television comedy ten years ago: Cancer, death, autism, menstruation, gay sex, teenage sexuality, alcohol, and drugs are all unabashedly on the table. Nothing is given the trite "afterschool special" treatment here. But nothing is depressingly bleak either; this is an easy half-hour for those looking for a lighter alternative to Euphoria.

The rest of the cast and supporting players make for a uniquely authentic ensemble -- maybe because these teens look like actual teens. Cromer and Press beautifully capture the imperfect ways to manage high school while also dealing with the death of a parent ("I look like a child whore widow" is the best line from the pilot, delivered before an even more memorable funeral scene). Ivy Wolk, who plays one of Genevieve's frenemies, the Sia-mopped Tellulah, gets to spit out a few verbal barbs, but she never comes off as a complete mean girl. And Faison is the Perfect Boyfriend who finds himself as the unexpected fourth wheel in these siblings' messy lives. They're sloppy, they cry on each other's shoulders, and they have no idea how they're going to get through the next week.