Everything I Learned About L.A. I Learned From 'Melrose Place' Up until that point in my life, Los Angeles, to me, was the fascinating jewel crown of the West Coast, a glimmering city full of beautiful people and fabulous places where beautiful people mingled with each other and, yes, slept with other beautiful people. This impression was mostly informed by a steady and possibly unhealthy diet of Aaron Spelling dramas (Beverly Hills, 90210, Models Inc., Malibu Shores, Pacific Palisades, Titans) throughout my formative years. But none had affected me as much as the 90s pop culture phenom that was Melrose Place.

Now, for the random GenZ-er who may be reading this, Melrose Place was a nighttime soap that ran from 1992 to 1999 for a head-spinning total of 230 episodes. It was about hot young people (mostly GenX-ers) who lived in a West Hollywood apartment complex with a pool in the courtyard. These hot young people worked with each other and slept with each other...a lot. They also betrayed each other (constantly), blackmailed each other, schemed against each other, and at times, even tried to kill each other -- via automobiles, guns, strangulation, lobotomies, bombs, poisonings, and the occasional pushing out of windows of high-rise office buildings. I was an impressionable 13-year-old during the show's heyday, so I became obsessed with every plot, and this should explain a lot about Present Day me.

Cut to: me arriving in L.A. during the summer of 2002. I did not move into a cute one-bedroom in a Spanish-tiled complex in trendy West Hollywood. Instead, I slept on an air mattress on the floor of a friend's living room...in Burbank. But did her nondescript apartment come with a pool in the courtyard? Yes it did. And was she sleeping with one of her neighbors in the building? She most certainly was. This became the closest I would ever get to having a real-life Melrose experience...until 2013 (keep reading). 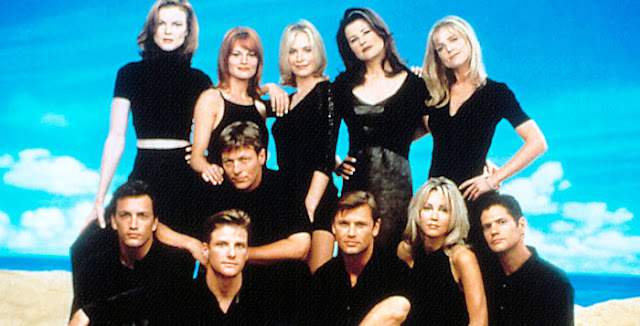 I was also aware enough to know that starting a new life in L.A. wouldn't send me into a scandalous spiral of backstabbing and bed-hopping. But I don't know what my younger self would have thought about Adult Me moving to the West Coast. Based on the twisted portrayal of Angelenos on Melrose Place, he'd probably assume the following...

The apartment building I move into will have a laundry room in the basement (even though basements are rarely found in Los Angeles). And mine in particular will be a perfect place to plant a firebomb designed to take out one's enemies.

My building's poolboy will have no name. I'll see him every so often, mostly in the mornings during an opening establishing shot. 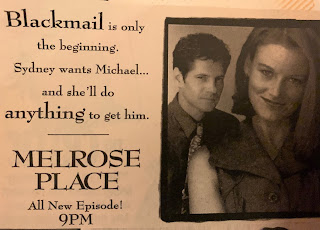 If my cute neighbor typically goes out late at night looking like a hooker, chances are she is a hooker.

Gay men in Los Angeles have no other gay friends for support -- only black aerobic instructors -- especially when they get framed for murder by closeted, manipulative doctors. 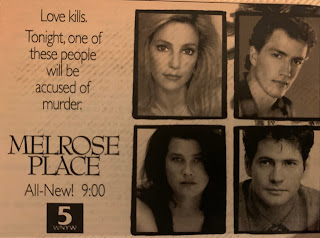 There's only one bar where my friends and I will hang out. It's very nondescript, plays crappy music, and has just one pool table.

My neighbors will rarely swim in my building's pool, especially after the whiny wife of one neighbor trips and bangs her head, drowning in said pool. My neighbor will subsequently claim that he saw her ghost come out of the water late at night.

And finally, everyone has secrets and messed-up pasts. And they will definitely come back to haunt them, especially during big life events.

Luckily for me, in 2020, after surviving eighteen years of everything this city has thrown at me, I am still standing. I'm practically an L.A. veteran, and I honestly can't imagine living anywhere else. My storyline has had its fair share of twists and turns, and characters have come in and out of my life. Some have been special guest stars while others have gone on to become series regulars. And if the current pandemic, widespread social unrest, and resulting emotional distress are the biggest things to happen since I moved here, then I have to see it all as an ongoing ratings stunt with an accompanying TV Guide ad dramatically proclaiming, "After this year, life for them will never be the same." I have to see it as some kind of sweeps event that will hopefully be resolved after several more "episodes." And I have to keep reminding myself that there will be a "new season" on the horizon filled with new and exciting developments that will get me and everyone I care about out of this dark chapter. One that will make us look back at this crazy period and ask, "What were the producers thinking?"