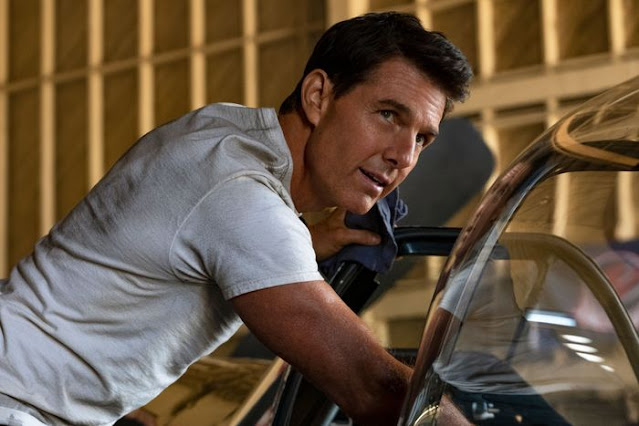 I wasn't blown away by Top Gun: Maverick like the millions of Americans who gobbled it up like relish-loaded hot dogs on the Fourth of July.

Even as a child of the 80s, the original film always eluded me. Sure, it was constantly on TV, but despite That Volleyball Scene, this 10-year-old had no interest in fighter jets and the rust-colored cinematography of Jeffrey L. Kimball. My preferred film collection from the years 1986 to 1989 included Ferris Bueller's Day Off, Dirty Dancing, Adventures in Babysitting, Big Business, Bill and Ted's Excellent Adventure, and Friday the 13th Parts VI-VIII. Those films were on repeat for me. Those films taught me the word "bogus." They made me want to dance in a parade in the middle of Chicago; they made me want to visit Chicago. They inspired me to deliver a sharp insult like a cutthroat Bette Midler.

So my apologies if I felt nothing while watching Maverick. I get the nostalgia, but I didn't get how a woman as gorgeous as Jennifer Connelly would own a dive bar and have no other character traits but Supportive & Single. I appreciate the practical effects and death-defying stunts (the "old-fashioned" moviemaking), but I didn't appreciate the Lady Gaga power ballad that felt slapped on and unnecessary. And while I love Tom Cruise's dedication to his craft and producing the best possible product (the latest Mission: Impossibles are some of the best action films of the last two decades), I don't love the square-jawed dialogue and character traits cut-and-pasted from an early 90s direct-to-video flick.