- June 12, 2007
The world of music, along with the pop culture universe in general, was changed ten years ago when a certain pop album hit stores across the country. It was a match that lit up a firestorm of copycat pop products, neverending merchandising, and hoarse vocal chords belonging to any teenaged female (and the occasional sensitive male) who stepped near a radio. 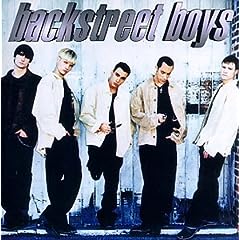 They were Boys. And they were from Backstreet.

The irresistible harmonies of Nick, AJ, Howie, Brian and Kevin were a throwback to earlier one-hit-wonders from the 90s like All-4-One and Color Me Badd. America had been given its answer to a 90s version of NKOTB.

I had a chance to revisit those innocent late-90s when my 18-year-old cousin, Lauren, visited me in LA last month. I played tour guide and she took the passenger seat, ready to soak up some SoCal sun. We hit up the stores in Beverly Hills. We conquered the rollercoaster on Santa Monica Pier. We watched Jesse Metcalfe take out the trash outside his home underneath the Hollywood sign (Stars, They're Just Like Us!). And we dined among the hipsters of Los Feliz on Franklin Avenue.

Sightseeing in LA requires a signifcant amount of driving. Hell, running out to 7-Eleven for some milk requires a significant amount of driving. And while showing Lauren the sights of the Southland, some tunes were needed, a soundtrack for her first Los Angeles Experience. Little did I know that handing over the iPod to an 18-year-old would transport me back to a time of which I thought I had let go.

Lauren shuffled immediately to the Boys, and the car was filled with those slick, Max Martin-produced rhytmns. We didn't dare roll up the windows. We weren't ashamed to share with the world our penchant for the blissfully bubblegum.

"Quit Playing Games With My Heart" was the Boys' debut single. Smooth R&B-tinged pop to distract all those suburban white kids from the moody rap and even moodier rock that dominated most of the 1990s. And who can forget those pensive glances and soaking-wet T-shirts in the ridiculous music video that was probably made for five dollars?

"As Long As You Love Me" was the companion piece to the latter. Similiar mid-tempo beat, same puppy-dog message of enduring love. Only this time the Boys stay dry in the video and try to woo the same girl in a portrait studio.

The video for "Everybody" was an ambitious (read: costly) homage to MJ's "Thriller", a choreography-and-prosthetic-heavy showcase of ghosts and goblins who just loved to get down and rock the castle. However, Nick Carter as a mummy asking if he's sexual was laughable, even back then.

"All I Have to Give," the final weepy to be released from their debut album, came with a "Conversation Mix" on the EP during which each Boy listed his likes and dislikes, what he looked for in a "girl," and how he would take care of her ("My name is Howie D, and this is how we do it!"). The gag factor had been turned up considerably to MY-GOD-AM-I-REALLY-LISTENING-TO-THIS proportions.

One can argue the Spice Girls paved the way for these Boys when they dropped their own disc in the winter of '96. Those British bitches invaded America and released a blitzkrieg of saccharine-sweet singles upon Top 40 radio stations everywhere.

It amazes me how much I remember from ten years ago. It scares me to realize how quickly it took ten years ago to become Ten Years Ago. 1997 was probably the fondest of my teen years, possibly "my favorite year." Fitting, because that was name of the musical in which I played a Philipino boxer named Rookie during my junior year of high school (a.k.a. The Prep Factory).

I remember singing along to Meredith Brooks's "Bitch" during dress rehearsals. I remember Sydney getting run over by a speeding car in her wedding dress at the end of the Melrose season finale. I remember attending a Sweet Sixteen at Juliano's in New Rochelle and unabashedly dancing to "Barbie Girl" with my private school posse. I remember driving up to Boston to check out colleges and stopping at a Connecticut shopping mall to catch a screening of Face/Off with my mother. I remember developing an obsession with Deborah Cox's "Things Just Ain't the Same" and having it peak on New Year's Eve when friends and I danced the night away at the Westchester County Center to her equally contagious "Nobody's Supposed to Be Here." I remember seeing Star Wars for the first time on the big screen when it was re-released during its 20th anniversary. I remember celebrating my 17th birthday with a close few at Edo, the Japanese steakhouse a few miles down the road from home. I remember coming in second place in the final round of Oral Interpretation at the New York State Forensics Tournament in Albany, coming close to grabbing that first place trophy which went to the Ivy League-bound Mahi Mouzakis - I lost to a girl named after a tuna steak.

Cut to me ten years later, and it's a bit mindblowing to see how things have developed. Unfathomable is the best way to describe what the next ten will hold. If H.G. Wells were to land on my driveway in his latest physics-defying contraption, I would just direct the fellow to move down the street to the next schlub who may be jonesing for a glimpse into his own Tomorrow.

I don't want the next ten years to fly by. I opt not to numb my butt in the passenger seat and blankly stare at the passing views. But isn't that the Catch-22? You can't have the proverbial fun without the time slipping away from you.

Whatever seat I take, driver or passenger, depending on my mood, I'll always make sure I have a little Backstreet to blare when taking in the sights.

Jenny said…
"I lost to a girl named after a tuna steak."

Also - totally loled when listening to you at the very end of the roller coaster video.