I sat in the passenger seat of my mother's then-new car as she steered us past the exit ramp to the Van Wyck Expressway in Queens. Craig David's "Walking Away" was in its umpteenth rotation on Z100, and I thought to myself, What an appropriate anthem for my send-off.

The enormity of this day in my life was something I couldn't fathom back then. I think my mother had assumed I'd fly off to Los Angeles with my ginormous piece of Kenneth Cole luggage and college-worn knapsack, meet my cousin at the gates of LAX, see a few palm trees, and then, after getting a bitter taste of the SoCal life, return to New York within a month or two. If my parents had thought otherwise, then I applaud them for supporting me, their only child, in his scary decision to travel to the other side of the country and start a new life.

Five years ago, Los Angeles was a different place in my eyes. I started my "new life" living in Burbank, shacked up with college friends who had already settled in and were desperately searching for new employment (just like the thousands of other green graduates who followed my lead in pursuing that rascally rabbit called A Dream). I slept on an Aero Bed, computerless, my entire life packed away in the trunk of a newly purchased Ford Focus. If I were green back then, I'd consider myself a nice shade of turquoise now.

Five years ago, Burbank was a nifty, comfortable suburb. A little hot, yes, but...cozy. Now? If you tell me I have to drive to the Valley in the middle of July, I'll roll my eyes and make sure the AC in my car is on full blast for my traffic-riddled trip to what I like to call the Furnace of LA.

Five years ago, Santa Monica Boulevard was a long stretch of non-descript buildings and pedestrianless sidewalks. Now, it's my main route home, dotted with name-changing venues in which certain favored cocktails were swigged during the wee hours of a Saturday night.

Five years ago, "the Hills" was a secluded neighborhood only viewed from afar while driving through the labrynths of Fairfax, La Cienega, and Wilshire. Now, I can say I've had the privledge of wining and dining in homes that cost more than five times the average American income. 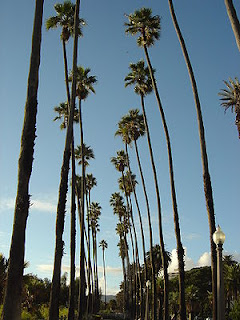 Five years have given me a history in Los Angeles. It marks the longest period of time I've lived in a place other than New York.

During my very first week in LA, back in that post-9/11 summer of '02, I had been put on the list for an industry mixer thrown by Paradigm. There I was, jobless, homeless, wearing nightlife attire that may have worked better on Landsdowne Street in Boston - a total newbie - attempting to drown myself in a pool of power players. I remember the details of this night so well because I had recorded it in one of my earlier chapters, the "life updates" I would e-mail to those I left back east. I remember faking my way through conversations after telling an exec I was "with Maverick Films" (Rachael, who had worked there at the time, got me on the list). The exec clearly interpreted this as "I'm an assistant at Maverick Films ready to mingle with others in my position." The woman passed me around like I was poised on a tray, spread across a cracker for consumption. She threw names at me, thrust handshakes my way, and fed me to sharks that were still practicing their bites.

Nowadays, if I'm subjected to an industry meet-and-greet, I try to find different, colorful ways to brief people on "my story." Started at Carsey-Werner. Did a home-makeover show for ABC Family. Freelanced here and there. Assisted an EP on an NBC drama. Now I'm at a kickass production company in Culver City.

It's a drill that we "Hollywood people" know all too well. What do you do? Where do you live? How long does it take you to get to work? Oh, the 405, it's a doozy that one!

"You're so LA," Matt tells me, a native Southern Californian himself, and I'm pretty sure there's a grocery list of things to legitimize this. However, that is a subject to be dissected for another time.

To me five years also means that Bank of America will no longer suck two-hundred-plus dollars out of my struggling account every month. My car loan will be paid off next month, and I couldn't be...more indifferent. The extra money will only flow towards the increase in rent that I now pay for my swanky Westwood pad: 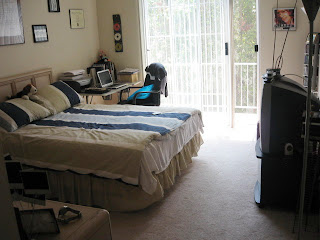 I have also seen good friends and acquaintances drop like flies over the past five years. They are the ones who have given up on the City of Angels and moved on to other places in search for better things, whatever that may be. I like to think of it as the Industry weeding out the herd. For every ten newbies that arrive in LA there's usually a pair of veterans who seem to retreat and pack their bags for either a greener pasture or a return to their roots.

Last Monday night I bid adieu to David, whom I had met two years ago, a Jersey boy jonesing for a return to the East Coast. Before that was Josh, Matt's best friend and former roommate (my predecessor), who kissed sunny SoCal goodbye and embraced the more atmospheric San Francisco. Before that was Molly, who left Hollywood to recupe near her family up in Seattle. And sometime within the next two weeks I will be saying farewell to Kerry, a former Knock Firster I befriended when I quit Carsey-Werner and joined the crew of the home-makeover show in the fall of 2004 - she's heading out of LA to enjoy the midwesterny windiness of Chicago.

Who's next? What friend (or foe) will be spit out of the meticulous machine that is Los Angeles? Will there be blood? Tears? Stay tuned...

Off to go texting on my commute home, ignoring the brushfires, and mentally flipping off the Mexican fruitseller who's holding up traffic on Westwood Boulevard.

I don't think I wished you a Happy 6 Year London Anniversary either.