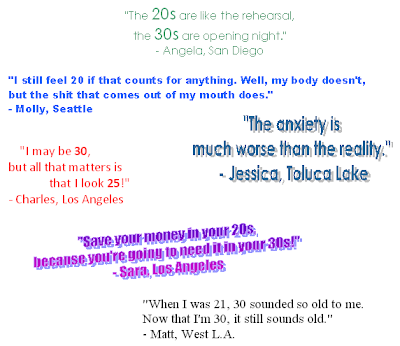 By now it would sound trite if I were to say "Oh, it's just a number," because it's more than that.

It's so...for lack of a better summarizing word, adult. Actually, scratch that. I don't really know what it is because I'm just starting out on this new frontier of an age. Am I excited to see what it will bring? Definitely. Am I sad to leave my 20s behind? Not so much.

The first decade of my life is a bit fuzzy for me, and I'm afraid it will get fuzzier as more candles pile up on my cake every year. The 80s were a blur of Catholic school uniforms, brown bag lunches, Hot Wheels and a soundtrack provided in part by the mesmerizing tunes of Tears for Fears and Culture Club. 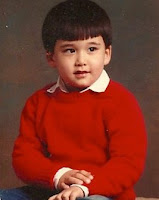 The 90s were much more vivid, my adolescent era, a time of my life documented by several photo albums chock-full of memories. Most of this decade was spent with my nose buried in paperback novels about serial killers and the supernatural. Needless to say, this did nothing for my social life. That is, until I came out of my proverbial shell after discovering the character-building wonders of Speech and Debate in high school. I had pulled my head out of the bookshelves and joined a society I was proud to be a part of. Suddenly, I had my first circle of friends - complete with party invites, aimless excursions around town (drivers licenses, hooray!) and the requisite drama that comes with private-school teenage angst. I was living in my own version of Gossip Girl, except some gender roles were reversed and nobody was doing lines of coke in study hall (at least to my knowledge).

The 00s were definitely game-changing. Here was a decade in which most of my life was enriched and spent in a place other than where I grew up. More firsts followed: First debt. First trip to Europe. First insurance policy. First car. First hangover. Most of my 20s have been documented electronically thanks to social networking photo albums and blogs, establishing a cyberlegacy that shall leave my own little imprint on the world. As you can see from the quotes displayed above, I've been told that it only gets better from here on out, and I totally get that. Turning 30 has allowed me to be more appreciative of things and the people in my life. This is where that "older and wiser" thing is supposed to kick in. Does that mean I'm officially licensed to shell out advice to my younger peers? Do I become a mentor? I don't feel that much wiser; perhaps "experienced" is more accurate. Or, "experienced with the intent to become wiser."

It's classic contradiction. I don't wish to grow up, yet I'm ready to take on the world, leave past mistakes behind and further establish myself (whatever that means, we shall see). I'll hold on to my Hot Wheels collection, but I'll continue to adorn my newly painted bedroom with some Crate & Barrel accents. I'll always have a soft spot for revisiting my R.L. Stine paperbacks, but now I'll try to find some inspiration to write my own young adult novel. I'll still have no shame in blaring some Ace of Base while driving down Santa Monica Boulevard, but while I do, I'll start thinking about which car I should buy next (something practical with a hint of luxury; perhaps a hybrid). Is it a generational thing? Or is it the world we live in that makes it harder for us to embrace adulthood? Or is adulthood really some kind of stretched-out adolescence?

Perhaps it's my environment. I live in a city known for its immaturity, its playfulness, a place where 40-year-olds dress like 25-year-olds, middle-aged moms hit up Hollywood Boulevard, and 30-year-olds can still "act up a fool." The responsibilities in this town are warped, and most people - especially those in my "industry" - have never left the playground. L.A. is one giant sandbox, and we are all mere players with our brunches and botox jokes, our premieres and pool parties.

Here, it's as if one can be excused for not acting one's age... 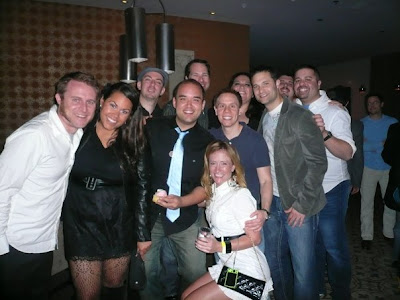 It's done. The party is over. Me Week was a success.

I thank every single person who wished me a happy day, showed up to my rooftop soiree on Saturday night, wrote me a beautiful card, bought me a drink, gave me a hug and provided all the love one guy could take.

I thank my parents for making the trip out west. I can't fathom what it must feel like to see your only child grow up into someone you'd never expect, living a life you could have never planned, creating a world for himself you could have never dreamed of. It's a mishmosh of emotions parents must go through when they see a child carry on without them. It's ridiculously brave. 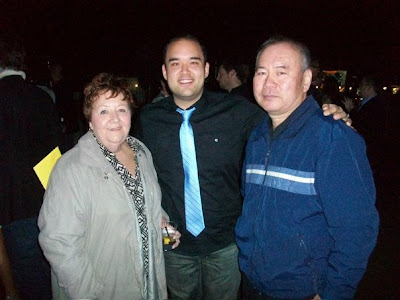 As for the party itself, it carried on beautifully (except for some music issues at the top of the night - really, Palihouse, you're gonna give me a small alarm clock radio to dock my iPod and play music from when your soundsystem is down? Do you not realize how much time I put in to perfecting my playlist? Have you met me?). The weather was chillier than usual (last time I checked, I never needed a scarf on my birthday). The cupcakes were gobbled up within minutes (thank you, Crumbs in Beverly Hills, for the friendly deal). The bartenders kept the alcohol flowing (did anyone try The H30, the personalized specialty cocktail?). And the afterparty in the hotel lobby was just as fun (minus any ironic R. Kelly references to "Ignition"). 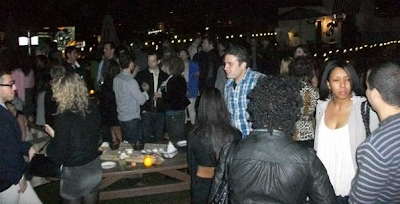 Five drinks and one vanilla cupcake later, I said my goodbyes to guests who had decided to stick around and enjoy the vibe that was flowing throughout the lounge. I needed a ride home and walked across the street to Barney's Beanery where the illustrious Julie and her friends were downing some greasy grub in an attempt to soak up all the vodka that had been consumed beforehand. Shortly after sampling a fried chicken finger and gulping down a large glass of water (gotta stay hydrated), my eyelids started to droop, my head started to bob. It was time to go home.

But home isn't where I landed. I had realized all of my birthday gifts didn't make it back to my apartment with my parents. Instead, Michael, who had generously donated his kitchen cart to roll out the cupcakes at the party, took them back to his place. And that is where I ended up crashing for the night, reading beautiful birthday card after beautiful birthday card. Four hours later, it was Easter Sunday morning, and I was enjoying a protein shake for breakfast, hangover-free (thanks, M...and thanks to J for the morning ride back to my apartment). 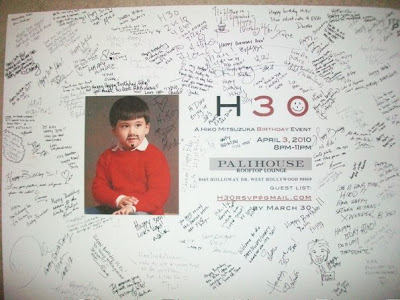 The Wall of Love

Jenny said…
So sorry I missed it, but it sounds like it was amazing. Another great post - especially considering I am contemplating a lot of the same issues as I flip from my 20s to 30s.