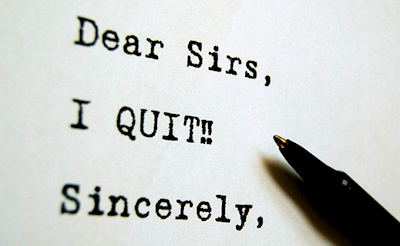 You know that scene in the movie where the guy gets up from his desk and quits his job, storms out of his oppressive office, and basically tells all of his coworkers - especially his boss - that they can kiss his ass?

That was me on the morning of January 25. Except, there was no dramatic walkout, no staplers thrown across the room, nor any angry proclamations made by the watercooler.

After four-and-a-half years of experiencing the insanity, pressure and overall awesomeness of commercial production at Anonymous Content, I have decided to move on. If Oprah, Regis, and the president of Egypt can leave, then so can I (from now on, I'm considering 2011 the Year of Great Departures). 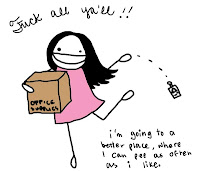 The natural question on the lips of everyone who's known about my resignation is: What are you going to do next? (Translation: How are you ever going to afford your Prius payments, your lifestyle, your rent?)

My answer, for lack of a better explanation, is: Everything.

For those who don't live in Los Angeles, this response is quite common, either as a way to deflect attention to one's cluelessness about employment or to genuinely cover all the bases regarding various projects one has lined up. I like to go with the latter. And to avoid sounding like an ambiguous asswipe, this is what's currently in the forecast: I will continue to run HotterInHollywood.com, increasing its presence at events throughout the city, write treatments for commercial directors through Voyage Media, the development/consulting company I signed with back in the fall, contribute to Instinct magazine, come up with kickass pitches in order to keep contributing to Instinct magazine, work on a couple of scripts, act as the entertainment editor for the soon-to-launch Elmrox Media, and stand by while I'm in the running for an editor position at two well-known blogsites, one of which recently made headlines after striking up a partnership with a major movie studio.

"A writer is a person who produces literary content, including but not limited to stories, poetry, music and other literary art, advertising, procedures, and books."
- Wikipedia

I've noticed several things during my first week of "independence." First, my mind is gradually adapting to the fact that this is not some extra-long weekend. I'm also making sure that I don't fall into the trap of sleeping in and wasting the day away. After all, I'm basically working for myself now and need to stick to some semblance of a schedule. I mustn't stay in bed past 8am. I should hit the gym in the morning as if it were still a part of my commute to work. I need keep myself busy, productive. I don't have a confined office anymore. The city of Los Angeles is now my office. It can change every day, depending on where I feel comfortable and can focus on a writing assignment, meet a deadline, or report from a press junket for HIH. *Perk: my rent is now considered a tax write-off as I will be definitely be working from home.

The second thing I noticed is that the government will start to see me differently. Hence, my trip to the L.A. Office of Finance where I applied for a business tax exemption. While I, on paper, may be seen as an independent contractor, I am not an official business entity. Hiko Mitsuzuka Inc. (or First Echo Entertainment LLC) doesn't exist (yet), but I may as well keep that vision alive as I make my way through the jungle of Freelancia.

Setting my own schedule is also something I have found to be liberating during the first week of the rest of my life. It has allowed me to discover a few things I wouldn't normally experience during a regular workday: the gorgeous renovations at the 24-Hour Fitness gym in West Hollywood, the egg white scramble at Basix Cafe (during a "breakfast meeting" with a "colleague"), parking spaces I wouldn't normally be able to covet on weekends or weeknights, and the allure of daytime television (Must. Turn. Off. The View).

Panicking about work isn't an option for me anymore. It's been nearly six years since I last jumped into the freelance pool (as a lowly PA back in the early-to-mid 00s), and without sounding too cocky, I wasn't as resourceful in my early 20s as I am now. Nearly nine years of living in Los Angeles and navigating "the industry" (raise your hand if you're getting sick of that expression) has taught me a great deal. I wouldn't have walked away from a full-time job if I wasn't secure and confident enough to break out on my own.

All of those pep talks, pop songs, self-help chapters, and philosophical nuggets about taking chances and following your heart - your passion - exist for a reason. They are signs that constantly pop up on the Boulevard of Life, put there to inspire, instill some courage, and spark some action - within others, within the world, or within yourself. And it was about time that I lit a fire under my ass, woke up, and actually did something to steer myself in a more desirable direction.

"Every new beginning comes from some other beginning's end."