Random Thought of the Week #20 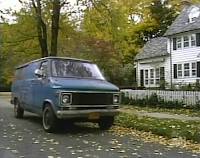 If I were one of Angela Bower's snooty Connecticut neighbors I would be concerned about the type of company she keeps, especially the kind that repeatedly pulls up to her house in beaten-up vans with New York plates. There goes the neighborhood, am I right?

Also, I used to love when 80s sitcoms retooled their theme songs as they neared the end of their run or entered a new decade, as seen here with the seventh-season theme to Who's the Boss?, possibly the most romantic and charming tune of them all.

How did they 90s it up? With a little sax of course (along with new vocals):

PS - Where is that neighborhood bicyclist now?
random thought of the week