The Curious Case of the Sitcom Star Replacement 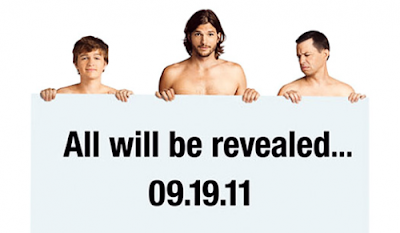 While the American television audience gets ready to see Ashton Kutcher make his debut on the (ahem) retooled Two and a Half Men, inquiring minds want to know how it will all go down. The burning questions on the minds of millions of fans are heating up: How will the former That 70s Show star, who's playing an immature Internet billionaire, be written into the show's premise? What's happening to Charlie Sheen's character? Is he really being killed off in a fiery accident, a plot development most likely the creation of a writer scorned? (See: The Hogan Family below)

I, for one, was never a regular viewer of Men. In the eight years it's been on the air, I probably caught a total of 20 minutes of the show, most of that time against my will as I had most likely been sitting on my grandmother's couch during any given holiday visit to New York. However, the brouhaha surrounding this recent casting headline has made me think about similar switch-ups on sitcoms past. Much like the Let's-Have-A-Baby ploy that's used whenever sitcom kids grow older and less cute (See: The Brady Bunch, Growing Pains, and Family Ties), the Sitcom Star Replacement tactic isn't anything new. For decades, television producers and writers have been coming up with ways to switch out prominent characters with new faces...sometimes playing the same character (I'm looking at you, Bewitched and Roseanne). This television staple has been used with the hope of keeping an audience's interest and the ratings stable enough to carry the series into lucrative syndication. Networks execs may call it "revamping," but boob tube fanboys like myself call it "jumping the shark" or just plain desperation.

Here are a few of those recorded-in-front-a-live-studio-audience laughers that attempted to replenish their creative juices when they were faced with some untimely departures...

By the eighth season of this Saturday night sitcom, Cloris Leachman took over for Charlotte Rae whose role as Mrs. Garrett had been reduced throughout the past two seasons. Why? Seeing as this all took place during that pre-TMZ, pre-Twitter era known as the glorious 1980s, fans can only guess and believe whatever Wikipedia now tells them.

*PS - The episode below, "Seven Little Indians," happens to be my favorite episode of the series. It's the one where Natalie gets strangled to death by a pair of fuzzy dice. To my hardcore Facts of Lifers out there, you know which one I'm talking about:

TV history books tell us that sitcom legend Valerie Harper demanded an impossible salary hike after the second season of her titular show, and when producers refused, she walked out. Enter Sandy Duncan, who arrived just in time for the 1988-89 season to play cheery Aunt Sandy, consoling the men of the family after Mama Val was killed in a fire (oh those writers!). After going through an awkward title change to Valerie's Family: The Hogans, network execs detected that no one really missed poor old Val and settled on the abbreviated The Hogan Family halfway through the third season:

Cast regular Sasha Mitchell, who played doofus cousin Cody, got into some legal trouble back in the mid-90s for allegedly beating the crap out of his wife. And the fact that the well-built dude had a black belt in Tae Kwon Do (and starred in those low-rent Kickboxer films) probably didn't help his case. Enter Bronson Pinchot, the former Perfect Strangers star who returned to this TGIF roots on ABC as Jean-Luc Rieupeyroux, a male beautician who becomes business partners with Carol (Suzanne Somers) in the show's sixth season:

Looking back now, the irony is loud and clear: 11 years ago Charlie Sheen stepped in to replace Michael J. Fox, who had to leave in order to deal with his Parkinson's disease. Sheen arrived at the top of the fifth and penultimate season when production moved its operations from manic Manhattan to schizophrenic L.A. He joined Heather Locklear, who had arrived during the season prior (conveniently after bidding adieu to Melrose Place), and the chemistry was apparently so great...it only lasted those two final years.

Wishing you and your loved ones a merry fall TV season,

Justin L. Brown said…
The main portion of the record is the more great. There are some strong tracks in the second half, Overdose being the highlight, however the slower tunes don't bring as a significant part of the wow consider regardless of the fact that they do showcase Foxx's voice and vocal extent. http://www.mordocrosswords.com/2016/02/sitcom-star-foxx.html
9:22 PM