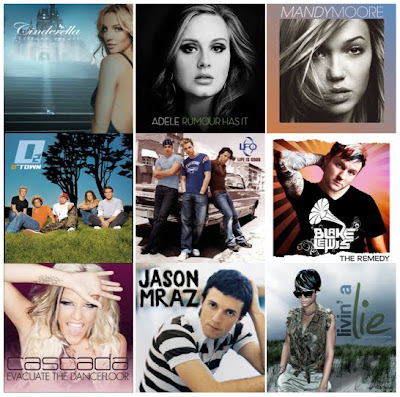 They are the songs that should've been - and never were - released as official singles for the masses to enjoy and for radio DJs to put on their Top 40 rotation. One can't help but wonder, What the hell were the record labels thinking?

Being one to never shy away from creating a playlist or two, I've compiled 20 tracks from the past ten years that never gained the popularity they deserve.

1. "Cinderella" by Britney Spears (2001) - A distant cousin of "Stronger," this powerhouse pop explosion from the album Britney is an anthemic banger in which Brit gets all Shakespearean on us with the lyric, "I won't return to thee." (See also: the BT-produced "Before The Goodbye," an unreleased, before-its-time electro-dance number that gives "Till The World Ends" a run for its apocalyptic money)

2. "Get Mine, Get Yours" by Christina Aguilera (2002) - After living in L.A. for several months I purchased the epic Stripped and was mesmerized - and unabashedly inspired - by this seductive slow jam, in which Christina commands you to work her "like a 9 to 5," while blaring it in my Ford Focus and driving down Santa Monica Boulevard on a Saturday night full of possibilities:

3. "Erase Her" by LFO (2003) - The one-hit-wonders who love girls that wear Abercrombie & Fitch churned out a second album that didn't really suck, including this Depeche Mode-lite tune that could've been the inspiration for Eternal Sunshine of the Spotless Mind.

4. "Blow Your Mind" by Nick Carter (2002) - Taking a page from Justin Timberlake's break from 'NSYNC, Nick Carter detached himself from his own boy band roots and came up with this craptacular pop-rock CD that featured a piss-poor excuse of a lead single. The Powers That Be had it all wrong; they should've chosen this head-banging throwback to 80s hair metal.

5. "One Sided Love" by Mandy Moore (2001) - The Middle Eastern flair found in the absolutely fabulous "In My Pocket" also seeps into this unknown track, along with some nifty percussion. "Hit me with your best shot," Mandy shouts. A hard order to follow after she's already given us hers:

7. "Suddenly" by O-Town (2002) - "The radio's playing loud, but it's not our song." Reality TV's first boy band could very well be singing about the fate of this track which was sadly lost in the shuffle during a time when teen pop had both feet firmly planted in its grave.

8. "I Could Be The One" by Stacie Orrico (2004) - Another latecomer to the teen pop boom, the talented Ms. Orrico unfortunately crashed and burned with her debut album, burying this catchy dance track under the rubble.

9. "All Day Long I Dream About Sex" by JC Chasez (2004) - From the highly underrated Schizophrenic, 'NSYNC's vocal second-in-command gets down and dirty on this supersonically funky foot-stomper. And stick around for that two-minute-long bridge in which we're transported into an electronic fantasia that's screaming for some Sonya Tayeh choreography (*NOTE: Although a music video was produced for this, the song never took off as a single).

10. "Dancing Alone" by Ashlee Simpson (2005) - Pre-nose job, Ashlee jumped on the dance-rock trend that was all the rage in the mid-00s. It's the only redeeming song on her sophomore album that's also the only song of hers I can tolerate.

11. "Did You Get My Message?" by Jason Mraz (2005) - With some vocal help by the jazzy-sexy Rachael Yamagata, Mr. A-Z croons his way through this plea for help on mixed signals.

13. "Livin' a Lie" by The Dream feat. Rihanna (2007) - Forbidden love never sounded so good (and hard-hitting) until this duet came along:

14. "Girl Next Door" by Darin (2008) - It's as if someone stole Gaga's "Just Dance," removed the vocals, and replaced it with this winner from Sweden's Pop Idol. Plagiarism allegations aside, this RedOne-driven spectacle simply makes me wanna break out into a dance in the middle of my high school cafeteria. Listen here.

15. "Monster" by Lady Gaga (2009) - Out of the eight exquisite pop gems borne from The Fame Monster this song, an ode to one wicked womanizer, had so much music-video potential, it's a shame Mother Monster never had the chance to bring it to life.

16. "The Remedy" by Blake Lewis (2009) - Why this American Idol runner-up never blew up will remain one of pop's biggest mysteries. And why this irresistible dance number was never released as a single that could've nabbed him much-needed fans and support remains an even bigger one:

17. "Why You Had To Leave" by Cascada (2009) - Take some heartbreak, pulverize it with a deep bass, scatter it in the wind, and then proceed to dance your ass off. That's what Cascada would want you to do when you listen to this jam that never was:

18. "Lift Me Up" by Christina Aguilera (2010) - From the much-maligned Bionic, the only time this track saw the light day was during a telethon benefiting the Haitian earthquake victims when Christina gave a stripped-down performance that stunned viewers.

19. "All Is Fair (Crazy Love)" by Anoop Desai (2010) - I had slotted this slow-jam on last year's summer mix, six months before it was actually released as a single (earlier this year - who knew?). This song should have put the Idol reject on the map with its Ne-Yo-esque feel, but sadly, sparks were minimal. Why, oh why?

20. "Rumour Has It" by Adele (2011) - Although it may too early to tell whether or not this retro, empowering hand-clapper will be released as the VMA showstopper's third American single off the majestically soulful 21, here's hoping that it will be before we all perish at the end of 2012.
Email Post
Labels: music playlists

Justin L. Brown said…
Shaklee was a fantastic visionary in light of the fact that not just is the item situating and logic, which is precisely what he set up 50 years back, so on target today, it's much more applicable today than it was then. The type of having an appropriated model of conveyance was so far cutting edge and comparatively radical, it's incredible.
http://www.mordocrosswords.com/2016/06/actress-brenneman.html
10:21 AM