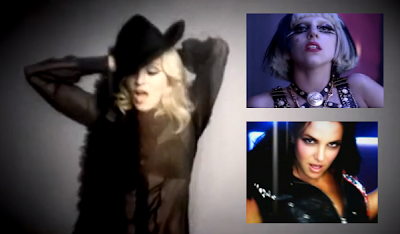 When you hear a pop song you absolutely love, it's easy to assume (or hope) that the accompanying music video will only enhance the awesomeness of it with the right blend of imagery, overall production elements (sets, camerawork, casting), and perhaps a good narrative to follow. But when the end result does nothing to compliment said tune, it leaves a bad taste in the mouths of pop culture junkies who eagerly anticipate seeing their favorite singles manifest into the visual medium (If you're one to argue that music videos are already a dying art form, then let's save that discussion for another time).

Here are five great songs from major pop artists whose music videos were major letdowns, most likely because expectations had been so high at the time. I'm sure there are plenty more to nitpick, but this will have to do for now...

Granted, this came out shortly after Brit shaved her head and went all Kimberly Shaw on an SUV with an umbrella...so how could we possibly expect the year's biggest trainwreck to get it together and shoot a video for the first single off Blackout, the album that promised - for the umpteenth time - a comeback of biblical proportions? A stripper pole? A horrible wig? Unflattering ass shots? No, no. no. Where's the hot choreography? Where are the hotter extras? Where's the friggin' concept? A Flipcam-shot montage of Ms. Spears sitting at a bar with a bunch of body doubles watching a raven-haired version of herself carelessly twirl around on a platform in a poorly fitted biker outfit does not a music video make:

The most recent disappointment in memory comes from Mother Monster herself, and the fact that it's GAGA, Queen of Creativity, Mistress of the Millennial Music Video, makes it even more heartbreaking to see such a lack of imagination on display. Sure, "Born This Way" was nice, and "Judas" was alright, but for "The Edge of Glory," her best single since "Bad Romance," a ginormous ball was dropped. Rumor has it, her record label got a hold of music-vid veteran Joseph Kahn to direct the piece but quickly lost him when he "refused" to "co-direct" with the Haus of Gaga, the creative think tank that has become infamous for controlling all content pertaining to Her Monstrous Majesty. The result is a sad production that seems to have been thrown together at the 11th hour, poorly showcases the late and great Clarence Clemons (is that a homeless man sitting on the stoop playing for change?), and doesn't do this epic anthem any justice. There's nothing glorious about being on the edge of...a fire escape. Stick with the Google Chrome TV commercial instead.

Hey guys, let's take old concert footage, throw in some exclusive behind-the-scenes shots, give it to an editor who has 30 minutes to spare, and slap on a thank you message to our fans at the top! Awesome, right? WRONG. In other words, the Biggest Cop Out in Teen Pop:

Filming a photo shoot for W magazine, adding a few Warhol-esque camera filters, and strutting around with a feather boa isn't the stuff great music videos are made of, Madge. Shame on you - and your director.

Since when did Adam Levine & Co. start providing soundtracks to surfing documentaries? In the music video for the last single off their latest album, not one member of the band appears in this 3-minute clip. What we get instead is some gorgeous shots of a guy surfing off the coast of some indeterminate country. Oh, and there are a few cutaways to a reasonably attractive woman who spins around in a red shawl. And waves. Lots of waves. I would've loved to have seen the call sheet for this minimalist shoot. What, the group couldn't at least be helicoptered in to simulate a jam session on a cliff overlooking a sunset? Lame:

If only I could go back in time to tweak the treatments made by the creative forces behind these pathetic excuses for music videos...