Psychotics of the 90s 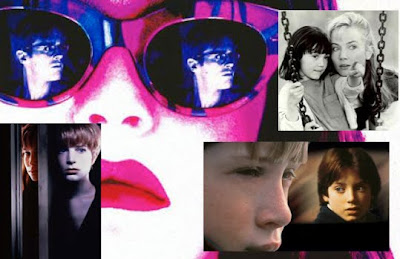 For the first half of the 1990s, not only did I have my nose stuck in the pages of paperback horror novels, I spent a good amount of time being infatuated with a particular genre of film. The Psychological Thriller was alive and kicking back then, and it seemed like anyone could turn into an obsessive loon. Perhaps Glenn Close reignited the trend when she boiled a rabbit and chased Michael Douglas around with a knife in 1987. Since then, Hollywood went to work, turning ordinary folk into menacing monsters that wreaked havoc on pretty unsuspecting white people. Psycho mailmen. Deranged lawyers. Murderous doctors. No profession was safe, and no one could be trusted.

For me, it all started with 1991's Deceived, the film that sparked my interest in the genre. Funny girl Goldie Hawn turned in a rare dramatic performance as a woman caught in a web of danger and betrayal when her husband (teddy bear John Heard) is killed in a mysterious car accident. The words "Goldie Hawn" and "psychological thriller," to this day, still leaves a funny taste in my mouth, and if I were to Netflix this movie today, something tells me it still wouldn't hold up.

I caught a matinee of this R-rated film (the second I ever saw in a theater) in the Bronx with my father when I was 11, and the audience couldn't have made it a more memorable experience. When Ernie Hudson's character popped up in the end to rescue little Emma from delusional bitch Peyton (an icy-perfect Rebecca De Mornay), a man sitting in our row jumped up and screamed, "My man Solomon!" And when the nefarious nanny gets her due (SPOILER ALERT) and is pushed out the attic window, falling onto the family's newly built white picket fence, the theater erupted in cheers. The crowd was so into the action, you would've thought I was watching a ballgame over at Shea Stadium. Best scene: Peyton goes up a 5-year-old bully in a playground, twists his arm, and snarls, "Leave Emma alone. If you don't, I'm gonna rip your fucking head off."

The film that turned stilettos into deadly weapons was a slice of GenX girlfriendship gone horribly wrong. Allie (Bridget Fonda) has a gorgeous NYC apartment all to herself after finding out her fiance (Wingsman Steven Weber) cheated on her. So, she does what any other white-girl-alone-in-the-big-city would do (besides becoming BFFs with her gay next-door neighbor) - she puts an ad out for a new roomie. Enter Hedy (Jennifer Jason Leigh), the slightly quirky brunette who gradually takes over Allie's life one calculated move at a time because - creepy alert - she wants Allie to be the twin sister she lost in a drowning accident. Forget last year's insipid Rachel Bilson carbon-copy, The Roommate, and get on board this crazy train:

Coming off the fluffy fun of two Home Alones and My Girl, Macauley Culkin's handlers must have been itching for something a little different for their precocious client. And thankfully this spin on The Bad Seed was the perfect project for him to go against type. I mean, who wouldn't want to see little Kevin McAllister cause a 10-car pile-up, attempt to drown his baby sister, and utter the line, "Don't fuck with me," to a wide-eyed Elijah Wood? Back in the seventh grade, I couldn't wait to grab some popcorn and get a taste of this wintertime kid-thriller.

A 90s version of Lolita with Westley from The Princess Bride and the cute chick from that Aerosmith video? Sold.

Yuppies Michael and Karen (Kurt Russell and Madeleine Stowe) find an intruder in their posh L.A. home and enlist the help of friendly cop Pete (Ray Liotta) who installs a new security system for them and develops a fatal attraction towards Karen (sample dialogue: "I got a cop who wants my wife!"). Needless to say, the shit hits the fan: assault, murder and (woo hoo!) a cocaine framing. *Comparable Contemporary: 2008's Lakeview Terrace.

Before Lara Flynn Boyle played a bitch of a lawyer on The Practice she played a bitch of an assistant in this camptacular thriller (just note the casting of Faye Dunaway) about a homicidal chick who would do anything to climb up the corporate ladder - and does.

No, it's not the name of some short-lived Aaron Spelling soap. It's the title of the flick in which a razorblade-loving Michael Keaton terrorizes Melanie Griffith and Matthew Modine in their swanky piece of San Francisco real estate.

Bruce Willis is a color-blind psychiatrist whose patients are mysteriously being knocked off one by one. Is it the troubled hot chick he's banging, who has ties to the members of his therapy group? Or is it someone else in the off-kilter group, which includes a kook with OCD, a suicidal ex-cop, a pyro, a nympho (Miss Scarlet herself, Lesley Anne Warren), and a transgender teenager? Check out the over-the-top trailer here.

Jenny said…
I saw a few of these ("Single White Female," "Hand That Rocks the Cradle") at birthday parties and they STILL haunt me. Totally not my genre!
6:12 AM