Should the Mayan calendar actually end on December 21, 2012 -- along with the rest of the world -- I will miss many of the pleasures that 2013 promises to deliver. Sure, I'll also miss my friends and family, but hey, at least the Apocalypse will help wipe out my student loan debt. Too bad the last installment of The Twilight Saga wasn't scheduled for next year...I would've loved to have seen the countless pissed-off virgins and their overweight mothers cry over never getting to see Edward and Bella kiss for the umpteenth time.

But if those ancient ones were wrong, then I can still look forward to the following (in no particular order)...

1. The Rest of Revenge - Who the hell got killed on Jack's boat in the middle of the ocean? And how in the world does Emily's mother not recognize her? Or does she, and she's just keeping up Emily's charade...?

2. Oz, the Great and Powerful - Because James Franco could squat on the corner of San Vicente and Santa Monica and drop a shadoobie in the middle of traffic, and I'd still pay to go see it (March).

3. Lady Gaga's Artpop - Her highly anticipated fourth album features the usual roster of EDM producers, including at least one track from French wunderkind Madeon, who's opening for her Born This Way Ball in L.A. this January.

4. World War Z -- Brad Pitt is a family man thrust into a fight against a global zombie uprising. Although I'm wary of the first half of that sentence, my moviegoer heart skipped a beat when I saw trailer footage of those ravenous cadavers climbing over each other to breach a barricade (June 13): 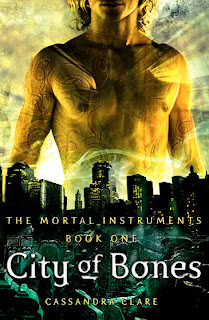 5. The Mortal Instruments: City of Bones -- I read this book over the summer and was instantly drawn into this urban fantasy series about a teenaged girl who becomes a pawn in an epic battle (what other kind is there?) amongst supernatural beings who exist in an unseen parallel world. Poised to be the next Twilight (and better). Hits theaters in August.

6. Joss Whedon's S.H.I.E.L.D. - It's basically a spin-off of the enormously bankable The Avengers, custom-made as an adventure thriller for ABC, the network that recently axed genre favorites 666 Park Avenue and Last Resort. In other words, don't f**k this one up, ABC.

7. The fourth season of Hot in Cleveland - Because I'm curious to see how they'll write out Betty White, who's in need of retiring those 91-year-old bones of hers...and I just really enjoy the seasoned ensemble of this TV Land sitcom.

8. The 20th Anniversary of Jurassic Park - I'm ready to party like it's 1993 and reminisce about the moviegoing experience that left an indelible mark on my 13-year-old self. Steven Spielberg's gargantuan adventure still holds up after all this time, and I can't wait to see it in theaters again (yes, in 3D) next April:

9. The grand opening of Topshop at The Grove - It's like a classier H&M, and this British retailer will finally be coming to L.A. next spring. As much as The Grove has become a nuisance to navigate (thanks tourists...and Mario Lopez), I will practice wallet restraint as I browse the store when it opens.

10. My next birthday - I plan to continue celebrating my 30s with a reasonably low-key night at home with good friends, bottles of wine, and a board game or two. Oh, and gifts. Many, many gifts.

Have yourself a Merry Apocalypse,