I Was on 'The Ricki Lake Show' 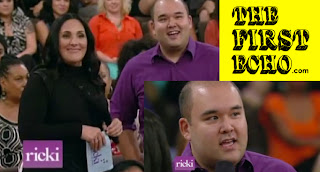 ...and apparently there was no way you could miss me in my purple shirt -- which Ricki liked, by the way.

I attended a taping of her "Ambush Makeover" show last month, and it felt as if I had been transported back to 1995 (running home from school, turning on channel 9, chanting "Go Ricki! Go Ricki!"). Who knew, 17 years later, that friendless, Knots Landing-obsessed bookworm from New Rochelle, New York would be standing next to Miss Lake and shooting the shit with her during a commercial break inside the studio of her reincarnated show in sunny Los Angeles?

If you happened to catch Monday's broadcast, you may have spotted me right before they revealed the makeover results in the final segment. And from the looks of it, it seems as if I had inhaled several burritos from Chipotle...along with the entire Chipotle franchise.

I was the only audience member selected by producers to ask a question. I was also one of five males in the audience, so perhaps they were looking for a little diversity...

This is what went down: