The 10 Greatest Sitcom Theme Songs from the 80s 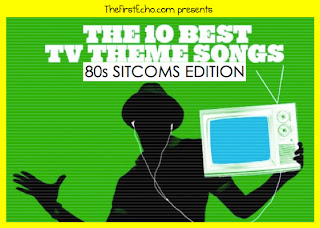 I still find it reprehensible that today's generation is being robbed of the enjoyment of proper TV sitcom theme songs. Therefore, while going over my iTunes playlist of classic TV jingles I've collected over the years, I couldn't help but climb on board the Nostalgia Express and reminisce about each of the following. What makes them so great is the way they left an indelible mark on a generation, perfectly encapsulating the sensibility and tone of their respective shows.

They truly don't make 'em like they used to...

1. Perfect Strangers - Covering the parallel origin stories of cousin Balki's journey to America and cousin Larry's big move to the big city, this is possibly the most epic (and inspirational) sitcom openings of all time. What network has the time (and budget) to shoot such a grand intro anymore? Apparently none.


2. Who's the Boss? - A perfect track for any romantic comedy, including Christopher Cross-like, easy-listening vocals (courtesy of country singer Steve Wariner from 1986 to 1990) and an enchanting arrangement that practically induces warm fuzzies:


3. The Facts of Life (post-Season 5) - The amped-up rendition of the theme to this seminal Reagan era classic was a much-needed, peppy, and upbeat upgrade:


4. Growing Pains - "Show me that smile again..." And we all did, thanks to this saxophone-driven, family-friendly tune. Week after week:


5. The Golden Girls - And you would see the biggest gift would be from...this gentle ode to friendship:


6. My Sister Sam - Sadly, this sitcom lasted two short seasons (remember the murder of star Rebecca Schaeffer?), but this theme stands out because of its then-innovative way of breaking down the fourth wall by having star Pam Dawber and Schaeffer chat with the camera before Kim Carnes's catchy "Room Enough for Two" kicks in. Check it out here.

7. The Cosby Show - Kudos to the producers for changing the arrangement of this Emmy-winning sitcom's theme song every. Friggin'. Season. Standouts include that operatic Season 5 opener, Season 2's funky number, and Season 7's bluesy rendition. Awesome all around.

8. Charles in Charge - One of those theme songs that explains the premise of the show. While the opening lyrics may raise a couple of eyebrows ("The new boy in the neighborhood lives downstairs, and it's understood...") What's understood exactly? That he's not a pedophile? That he's TV's first manny? "I want Charles in charge of me!" exclaims all dirty-minded Scott Baio fanatics. Listen here.

9. Saved by the Bell - A theme with just the right amount of rebellious spirit.

10. The Hogan Family - Thank you, Roberta Flack. Life is indeed "such a sweet insanity."

Honorable Mentions: Just the Ten of Us, Head of the Class